The exceptionally fun martial arts beat-em-up "Kickboxer: Retaliation" is a very dumb, and very satisfying throwback to a simpler time when American action films were as predictable as they were formulaic. Journey back in time with me to the 1980s, a not-too-distant time that some genre fans remember as the salad days of "Kickboxer: Retaliation" executive producer and supporting actor Jean-Claude Van Damme. Yes, the 1980s, a bygone era of meathead cinema when fool-hardy but determined white men routinely beat the odds—and their opponents—in exotic Asian locales, all in the name of personal vendettas.

"Kickboxer: Retaliation" is that kind of crowd-pleaser, a movie whose creators probably think they're bringing back "old school" values and techniques to modern-day audiences. Realistically, this film is the kind of reliable cinematic comfort food that only hardcore fans are aware of thanks to the vagueries of the Direct-to-Video and Video-on-Demand markets. "Retaliation" may not be formally dazzling, or even intellectually stirring. But it's got some personality, and it delivers a lot of basic pleasures that genre fans will go nuts for.

Understanding the plot of "Kickboxer: Retaliation" isn't especially vital to your enjoyment of the film. But it is worth noting that this is the first sequel to "Kickboxer: Vengeance," a promising 2016 reboot of Van Damme's serviceable 1989 vehicle. This time around, good-natured American fighter Kurt Sloane is played by Gabonian martial artist Alain Moussi. Moussi is a graduate of the School of Totally Fine But Mostly Unmemorable Stuntmen Turned Action Stars. He's ok, just don't expect a lot of emotive heavy-lifting from him.

At the beginning of "Kickboxer: Retaliation," Moussi's version of Sloane is immediately kidnapped and wrongfully imprisoned in a Bangkok jail by evil Thailand-based fight promoter Thomas Moore (Christopher Lambert). Sloane initially refuses Moore's invitation to participate in an upcoming—and seemingly unbeatable—fight with a 400-pound mountain named Mongkut (Icelandic strongman Hafpor Julius Bjornsson). But then Moore kidnaps Sloane's girlfriend Liu (Sara Malakul Lane). And that's when things get personal. And by "personal," I mean "you've seen this story a million times before, and know exactly what comes next."

Still, what "Kickboxer: Retaliation" lacks in originality it makes up for in sheer chutzpah. This movie's creators are as relentlessly eager to please as a bed-wetting newborn puppy. Each new scene has at least two or three thrilling and/or unusual things that target audiences will adore. Start with a bar-setting prison fight scene that appears to be (but is almost certainly not) shot in one long take. Moussi is put through his paces, running up stairs, and knocking about a slew of disposable opponents. It's a well-choreographed, and dynamically shot set piece. And when it's over, Mike Tyson, playing a surly inmate, shows up. Tyson, who recently had a small but memorably out-of-left-field role in sturdy martial arts flick "Ip Man 3," is just self-aware enough that his character stands up and growls to Sloane that his brawling "interrupted my meditation." That alone earns a big laugh. Then Tyson chases Moussi down a hallway, and tries to knock out our hero. Even this action scene is pretty well-staged, and shot.

Eventually, it becomes impossible to separate the film's minor pleasure from its major ones. Who could say no to Lambert, lustily throwing himself into the role of a villain whose main duties include sitting in a chair, making threats, and cackling at violence? Lambert has always excelled at this kind of low-stakes, high yield supporting role.

And how about Van Damme, reprising his role as Durand, Sloane's Mr. Miyagi-type mentor? Van Damme gets an entrance worthy of a great star: his back is to the camera, so he gets to spin around like he's Derek Zoolander delivering his signature "Blue Steel" look. In fact, Van Damme's Durand is so cool that he is, as the song goes, wearing his sunglasses at night. We soon learn why: Moore's heavies blinded Durand, leaving his peepers a ghastly shade of white. I know, right? And I didn't even mention the scene where Lambert throws a table at Tyson!

These charmingly eccentric incidental pleasures wouldn't mean much if the action scenes in "Kickboxer: Retaliation" weren't good to great. Thankfully, there are a handful of technically polished, and even emotionally involving scenes, including Moussi and Bjornsson's big fight. This sequence delivers because its creators play up the brutal spectacle of watching Bjornsson, a literal giant of a man, thrash Moussi, a relatively tiny Caucasian African native, within an inch of his life. Then Tyson, who hasn't done much throughout the rest of the film, gives Sloane some generic Yoda-like inspirational advice through voiceover narration. Now Sloane knows what to do: he puts on a blindfold. You don't have to be a fan of the original "Kickboxer" to know what's going to happen next. But you'll probably cheer anyway. 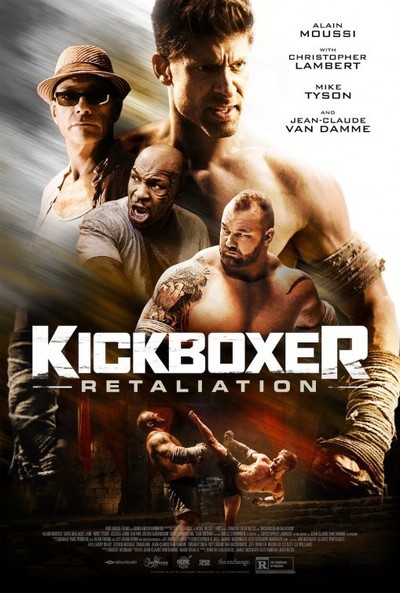 Rated R for sequences of violence