Donnie Yen and fight choreographer Yuen Woo-Ping return in “Ip Man 3”, the latest chapter in the saga of Yip Man, Grandmaster of Wing Chun. The “Ip Man” series, which began in 2008, is part history lesson, part legend building, with Yen applying his formidable skills to the defeat of countless bad guys. Antagonizing our hero this round, in a bit of color-blind stunt casting, is Mike Tyson. Tyson plays an evil land developer who enlists his army of Wing Chun fighting goons to scare a local school off a piece of prime real estate. The well-respected Ip Man is called upon to defend the school and protect his son’s education. Mucho mayhem ensues, of course, but “Ip Man 3” also sneaks in welcome moments of mushy romantic sweetness between Master Ip and his wife, Cheung Wing-sing (Lynn Hung).

The real Master Yip Man is well known for being Bruce Lee’s teacher. So “Ip Man 3” begins in 1959, with Lee showing his impressive skills to Ip Man. In this brief sequence, Kwok-Kwan Chan nicely captures Lee’s essence. As the grandmaster throws cigarettes and water at Lee, director Wilson Yip shoots the inanimate object carnage with fan-pleasing gusto. Yip takes a similar approach to shooting Yuen Woo-Ping’s fight sequences, whether Ip Man is taking on the standard-issue horde of attackers or Tyson’s one man wrecking crew.

Far be it from me to throw shade on Tyson’s performance. He’s intimidating in his few scenes, executes a satisfying 3-minute rumble with Yen and utters in Cantonese the profanity that earns this film a PG-13 rating. He’s here to bring new fans to the series, but indirectly, he plays a small part in the film’s evocation of Master Yip’s most famous student. Both Ip Man’s fight scene with a prominent American sports legend and the film’s most melodramatic plot development conjure up memories of Lee’s “Game of Death”. In fact, Lee, his contemporaries and his successors haunt “Ip Man 3” as it finalizes a series that honors and embraces its martial arts disciplines.

When not dealing with Tyson’s land grabbing, Master Ip must deal with a challenger for the throne of Wing Chun grandmaster. When not fighting for Tyson’s amusement and cash, rickshaw driver Cheng Tin-Chi (Zhang Jin) plans on opening a competing school for Wing Chun. Cheng Tin-Chi’s allegiances are shaky; he appears to be playing both sides of the real estate scheme, working for Tyson but never failing to show heroics when Tyson’s hordes appear to get the better of Ip Man. An early scuffle between the young sons of the two men foreshadows a battle between the adults. The match does not unfold as we expect, however.

Also unexpected is the sudden cancer diagnosis of Cheung Wing-sing. After “Creed”, this real-life plot twist suffers a bit with its familiarity, but Yen and Hung make it work with a sweet, romantic chemistry that spans the entire series. “Ip Man 3” allows the bittersweet notes of their tragedy to play in the foreground, stopping the action for scenes where the couple reveal the depth of their relationship. Master Ip may be able to take on dozens of pole-waving adversaries, but his resistance is no match for the lovely way his wife looks at him. When “Ip Man 3” stages its climactic battle, the film works Cheung Wing-sing into the scene as an extra measure of reassurance for the audience.

Lest the audience get too antsy with all this emotion, “Ip Man 3” offers up a kidnapping, arson, evil English money men hellbent on enforcing their foreign influences and battles with knives, poles, fists and feet. The Tyson subplot could have easily been excised, but even at its most extraneous, it still provides entertainment value. The battle for the true representative of Wing Chun is treated with a gravitas that manifests itself in the mutual respect the competitors have for each other.

The “Ip Man” series has a legion of loyal fans, many of whom voted the original “Ip Man” into imDB’s top 250 (it’s number 227). If this is indeed the last chapter, as announced, these fans should be more than satisfied. The film’s final montage may even wring a few tears from them as well. “Ip Man 3” is pretty much what you’d expect, but there’s something extra special about an action movie that ends not on a moment of triumph but one of introspection. That alone buys it a lot of goodwill. 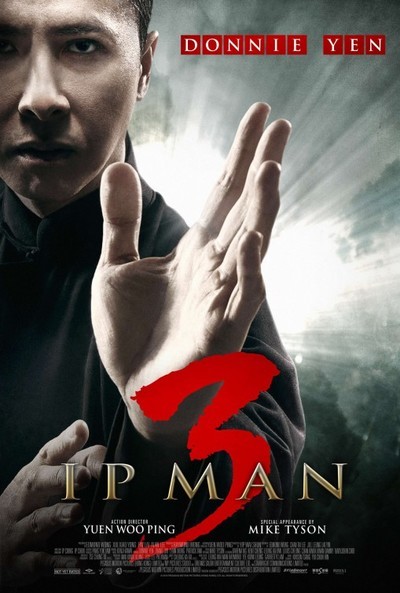