Keep an Eye Out

A group of policemen bumble their way through their authority roles; one of them, Philippe (Marc Fraize), only has one eye. The walls of reality collapse on top of each other scene by scene, including a flashback in which one character watches another character on TV, the latter complaining about something that had technically not happened yet. A confused man is at the center of it all, realizing only too late just how wrong things are, but not knowing how to question them. Only in the filmography of writer/director Quentin Dupieux, he of absurdist romps like “Rubber,” “Reality,” “Wrong,” and “Wrong Cops,” would these ideas be tediously familiar. And that’s for a project that yearns to be more ordinary, per Dupieux's words in the film's press notes.

Dupieux is a significant director, and “Keep an Eye Out” is very much in his significant style, even though it's a minor addition to his filmography. His script’s main “plot” of filing a police report naturally begins with a man in a speedo conducting an orchestra out in a field, before being chased away by cops. Illogic is the key here, as with his previous movies, but don't confuse it for an interpreter. In almost any other movie, a police report's creation would bring stability and focus, but this one is being filled out by Buron (Benoît Poelvoorde), who is dopey in spite of his tough-cop exterior, and irritated at the boring details of the story in spite of wanting to get it right. He also has a hole in his stomach where smoke comes out each time he puffs a cigarette.

Some semblance of normalcy comes from Fugain (Grégoire Ludig), an outsider to this weird world in the police station, who does seem to have something he’s hiding behind a calm demure and interest in getting this over with. He is the man who found a bloody body and called 911, making him the subject of Buron’s glares during their drawn-out interview. Fugain’s story involves seven trips to the elevator in one night, and he recounts them to Buron step-by-step, flashbacks that blend in visual elements he encounters at the police station. There’s a break early on, in which Buron leaves Fugain under the watchful eye of a cop named Philippe. That Philippe does indeed have only one eye does not mean all that much, aside from how Dupieux previously had a cop with an eye patch in "Wrong Cops." Philippe gets too fixated on showing off his badge, and exits the film in slapstick fashion.

None of this absurdity is laugh-out-loud funny (it’s not meant to be), and the odd beats of dialogue blend in with the script's procedural nature and occasional asides. Such is Dupieux’s handling of these characters in his cinema for the attentive stoner. It’s about stretching, and normalizing, the way things can be strange, whether it’s a strange action by a character (as when Fugain crunches into an oyster like a hamburger slider) or a strange development regarding how one scene’s reality is the next scene's hallucination. It feels incredibly stream of consciousness, with only a couple of narrative ideas keeping it from flying away into the stratosphere. Dupieux’s cinematography remains interested in futzing with conventional angles—Fugain and Buron’s rapport is covered with every type of over-the-shoulder angle possible—but the dialogue-driven nature is more slack than usual, despite how you have to hang on every word and wait for the left turns. Contrary to the opening speedo-conductor chase, the movie lacks momentum, and makes Dupieux’s interest here in the ordinary seem like a bad idea.

It is still incredibly admirable how Dupieux commits to his absurdity, actualizing obsessive and reality-shifting ideas by treating them as splattered paint, and not, like with many other directors, as meticulous blueprints. Sometimes he makes movies in part because they do not exist yet, as with his previous, excellent “Deerskin,” in which Oscar-winner Jean Dujardin kills people in the countryside to make sure he is the only person wearing a jacket. That film is much better focused—“Keep an Eye Out” has the air of a tangent, making its few revelations touch-and-go. Even a big reveal at the end about the police file’s purpose is like a disorienting shift just for the sake of it, and it’s a played-out greatest hit in the scope of Dupieux's usually inventive and exciting work.

For all that goes into making a movie—the prolific Dupieux wrote, directed, shot, and edited this one as with his previous films—the impulsive, scattered storytelling here almost feels like an unrewarding and contrarian statement to such hard labor. And for all the police parody one might try surmise from its ordinary absurdity, “Keep an Eye Out” does not make much of a point of anything. Eventually it just ends, and you’re left waiting patiently for Dupieux’s next one. 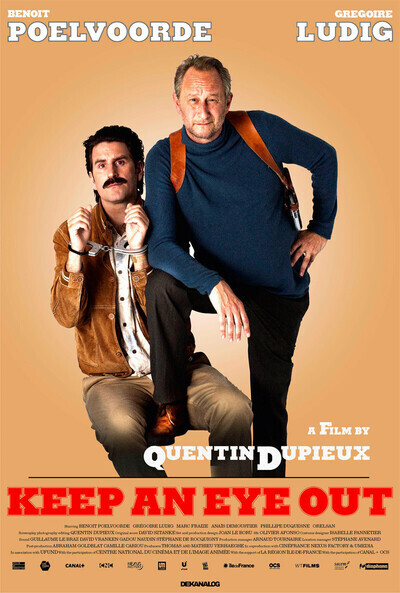