“Deerskin” has one great idea that French writer/director Quentin Dupieux slowly and vigorously runs into the ground: what if a wannabe filmmaker, played by charming goofball Jean Dujardin, was possessed by the spirit of a deerskin jacket? The movie’s sense of humor comes from its story’s apparent meaninglessness, like how many inherently absurd scenes are drawn out to the point where they feel overlong, despite the movie’s svelte 77-minute runtime. So “Deerskin” isn’t weird enough to be great, mostly because Dupieux (“Rubber, “Reality”) is a little too precious when it comes to pacing, characterizations, humor, etc.

But this horror-comedy is the latest proof that Dupieux is one of a few modern filmmakers whose movies resemble nightmares, since his movies are so wispy that their weird-ness only grows in your mind as you retrospectively think about them.

At first, you have to feel your way around “Deerskin” to get where Dupieux leisurely and inevitably gets to. We follow Georges (Dujardin) as he aimlessly stalks around a small Alpine village, sometimes filming locals for a mysterious personal movie, sometimes talking up impressionable local bartender Denise (“Portrait of a Lady on Fire” star Adèle Haenel). Georges also sometimes talks with his new deerskin jacket. He plays both parts during these private conversations, speaking aloud whatever he and his jacket are thinking, as if he and it were bickering roommates in a Harold Pinter play. These scenes are mostly funny because Georges’ jacket sounds just like Dujardin’s character, only in a slightly lower register. It’s the kind of half-silly, half-matter-of-fact voice you’d make if you were trying to make a private joke with your nephew or niece.

Also: Georges' imaginary friend wants to be the only jacket in the world. Georges tries to achieve this totally normal dream by convincing the local townsfolk to be in his movie, starring as random civilians who swear off wearing jackets, and then relinquish their outerwear to Georges. Denise, an aspiring editor, is the only local who wants to help Georges complete his deranged project; her enthusiastic input is also kind of funny, but only once “Deerskin” comes to a full boil. That takes a while though, since Georges’ descent into madness is never as immediately compelling as it is theoretically clever.

Dupieux’s sub-dada sense of humor and style of drama resembles a drier, more European (ie: aloof, because somewhat more literate) version of the stoner-friendly surrealist aesthetic of Adult Swim shows like “Tim & Eric Awesome Show, Great Job” and “Eagleheart.” If you squint, you can also see traces of the Theater of the Absurd’s influence in any “Deerskin” scene where Georges mutters ridiculous, even childish tall tales in order to advance his anti-jacket campaign, like when he tells Denise that his movie’s producers can’t advance him any money because they’re all stuck in Siberia. Then again, “Deerskin” would probably sit better with Adult Swim fans since there are multiple scenes which, in both their excessive duration and negligible payoff, feel like they were made by smartass comedians who are so in love with their alienating, anti-comedy-style of humor that they often inadvertently sand off their jokes’ weirdest edges. So a running gag involving a judgmental mute boy does not pay off well, and not just in the way that Dupieux seems to have intended.

Thankfully, Dujardin’s squirrelly performance is funny enough to make “Deerskin” one of Dupieux’s best so far. Dujardin’s especially funny when Georges either gets lost in thought, or tries to shoo away anybody who inconveniences him. I love his little willowy voice when he first talks as his jacket: he whispers, on its behalf, that “I come from Italy!” Or how about the scene where Georges tries to dismiss the jacket as it tries to share its “greatest dream”: “Not now, this book is interesting.” At its best, “Deerskin” is as strange as the weirdest bits in a Takashi Miike movie, or a “modern” Pirandello revival (one of those traveling productions where the only set decoration is a gravel pit and some expressively askew halogen bulbs).

“Deerskin” doesn’t have any staying power, because it’s not supposed to: Dupieux’s movie inevitably falls apart because nihilism is cool, man, and that’s also a big part of his style. Georges’ whimsical mania doesn’t mean anything, and that meaninglessness doesn’t matter to Dupieux, as he communicates when Georges shrugs at Denise when she tells him what she thinks his movie is about: our uncritical love for stupid things. She’s not wrong. For proof, see “Deerskin.” 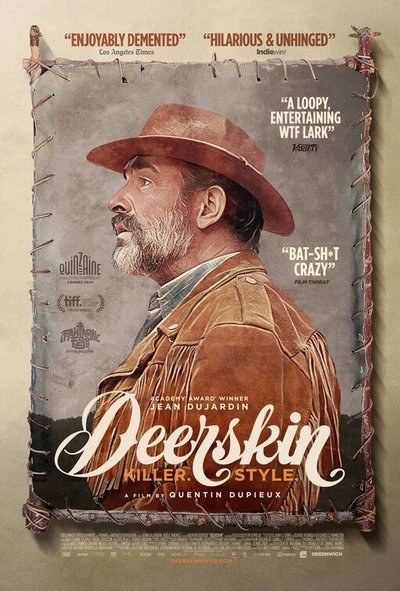 Albert Delpy as Monsieur B.