We are republishing this piece on the homepage in allegiance with a critical American movement that upholds Black voices. For a growing resource list with information on where you can donate, connect with activists, learn more about the protests, and find anti-racism reading, click here. "Just Mercy" is currently streaming for free on Amazon, Google Play, and YouTube. #BlackLivesMatter.

“Just Mercy” has the misfortune of hitting theaters at the same time as “Clemency,” a more daring and better film set on a prison’s Death Row. Though the lead characters differ in intent—Michael B. Jordan’s activist Bryan Stevenson is trying to get prisoners off the row while Alfre Woodard’s warden Bernadine Williams oversees their executions—the two actors each have moments of stillness where they seem to physically vibrate from the internal trauma they’re suppressing. This is built into Woodard’s character intrinsically, but for Jordan, it feels more like an actor doing his best to rise above the paper-thin characterization he has been given. Stevenson is so noble and flawless that he’s a credible bore unless you focus on Jordan’s physicality. You look into his eyes and see him trying to play something the film’s cautious tone won’t allow: a sense of Black rage.

Since the days of '50s-era message pictures, the majority of films about African-American suffering have always been calibrated the way “Just Mercy” is, with an eye to not offending White viewers with anything remotely resembling Black anger. We can be beaten, raped, enslaved, shot for no reason by police, victimized by a justice system rigged to disfavor us or any other number of real-world things that can befall us, yet God help us if a character is pissed off about this. Instead, we get to be noble, to hold on to His unchanging hand while that tireless Black lady goes “hmmm-HMMMMM!” on the soundtrack to symbolize our suffering. There’s a lot of “hmmm-HMMMMM”-ing in this movie, so much so that I had to resist laughing. These clichés are overused to the point of madness. Between this, the equally lackluster “Harriet” and the abysmal “The Best of Enemies,” that poor woman’s lips must be damn tired from all that humming.

Movies like “Just Mercy” spoon-feed everything to the viewer in easily digestible chunks that assume you know nothing, or worse, don’t know any better. They believe that, to win the hearts and minds of racists, you can’t depict any complexity lest you ruin the “teachable moment” the film is supposed to be presenting. It’s unfortunate that these teachable moments are so often delivered in the exact same, tired manner, as if they were meant for people who are perpetually having to repeat the same grade. Making matters worse, the White perpetrators of injustice are so often one-note villains that they allow for plausible deniability by the viewer: “I can’t be racist because I’m nowhere near as bad as THAT guy!” Granted, this is a period piece true story and the film can’t bend its real-life people too deeply into dramatic license, but director and co-writer Destin Daniel Cretton applies a way-too-familiar formula to their personalities.

Despite my complaints, I have some admiration for how much “Just Mercy” is willing to interrogate. It’s a lot, and I feel some commendation is in order for bringing these issues up at all. Adapting Stevenson’s memoir, Cretton and his co-writer Andrew Lanham touch upon activists for Death Row prisoners, the value of White lives vs. Black lives, veterans whose PTSD is left unchecked, corrupt law officials, justice system imbalances and, in a subplot anchored by Tim Blake Nelson, the idea that poor people are victimized by law enforcement regardless of what color the impoverished person is.

I remember watching the “60 Minutes” profile re-created here, where Stevenson takes the case of Walter McMillian (Jamie Foxx) to the public. McMillian was on Death Row for a crime he swore he didn’t commit, the death of a young White woman. Despite having 17 witnesses vouching for his whereabouts at the time of the murder, an Alabama jury of 11 White men and one Black man convicted McMillian based on the testimony of an ex-con named Ralph Meyers (Nelson). Stevenson took his case to the CBS airwaves after his successful attempt to get McMillian’s case reopened ended with a judge named after Robert E. Lee discarding Myers’ admission that he’d lied under oath in the first trial. All of this is completely believable in reality, but here, both the corrupt Sheriff Tate (Michael Harding) and the district attorney are depicted as cartoon villains acting alone rather than in service to a far more racist and corrupt system. You have to wait until midway through the closing credits to discover that Tate was re-elected multiple times after his role in McMillian’s railroading was exposed.

I should mention that this case took place in Monroeville, Alabama, also known as the home of “To Kill a Mockingbird” author Harper Lee. I bring up Lee because her book, and its subsequent cinematic adaptation, are ground zero for all the aggravating clichés I mentioned above. So it’s no coincidence that “Just Mercy” plugs Michael B. Jordan into the Atticus Finch role. Like Gregory Peck in that immortal performance, Jordan has presence, idealism and righteousness on his side. What’s missing is the commanding sense of authority Peck brought to the part, which isn’t Jordan’s fault at all. Stevenson is a somewhat naïve Yankee from Delaware trying to navigate the ways of the Deep South; Finch was an Alabama native with a paternal glow.

As Stevenson’s co-worker Eva, Brie Larson reteams with her “Short Term 12” director but is given little to do other than to be threatened once she re-opens McMillian’s case. Still, she milks a lot of character out of the simple act of smoking a cigarette. Foxx’s McMillian is written in a similarly flat manner, but he shines in his few scenes with fellow Death Row inmate Herbert Richardson (Rob Morgan). Richardson’s arc is the one truly successful element of “Just Mercy,” and Morgan’s excellent, heartbreaking performance is being unfairly overshadowed by Foxx’s this awards season. A Vietnam vet with severe PTSD, Richardson caused the death of a young girl when a bomb he planted on her porch exploded. Unlike McMillian, Richardson is guilty of the crime and believes he belongs on Death Row. He was unable to get help for his mental issues before he committed his crime, and the prosecutor withheld this information during the trial.

Morgan shades his small part with such beautiful, subtle gestures that he becomes the only character who feels fleshed out, complex and real. You feel not only his sense of guilt but the demons that infected his brain during combat. His last, horrific scene is so well acted that it still haunts me; it’s the only time the viewer is forced to be uncomfortably conflicted, to think about the complicated nature of injustice. I wish the rest of “Just Mercy” had that level of jarring complexity instead of relying on easy tropes to deliver its message.

"Just Mercy" is currently streaming for free on Amazon, Google Play, and YouTube. 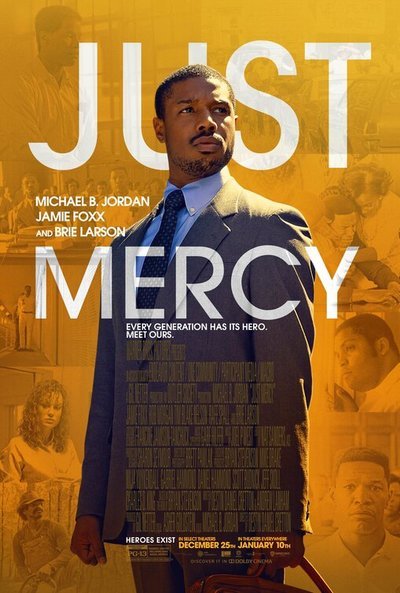 Rated PG-13 for thematic content including some racial epithets.

Michael B. Jordan as Bryan Stevenson