Steve "Spaz" Williams is not a name that's in the front of most movie lovers' minds, but he's a famous name to veterans of the special effects industry: a pioneer in motion-capture and realistic computer rendering who helped make the current era of cinema possible, for better and worse. The documentary "Jurassic Punk" explains why his name makes his colleagues grin and cringe, sometimes in the same instant. It's a portrait of a hard-drinking, charismatic, obnoxious self-styled rebel who was his own worst enemy but whose brilliance and tenacity allowed him to thrive in an industry that wouldn't ordinarily have any use for someone like him.

Born and raised in Toronto, Williams taught himself traditional cel animation as a young man, studied computer graphics at Sheridan College, then got his first Hollywood job in 1988 working on the production of James Cameron's underwater sci-fi thriller "The Abyss," which came out the following summer. The film was not a financial success, but critics and viewers praised its filmmaking craft, in particular its refinement of then-somewhat-new computer graphics imagery in a sequence where characters in a deep-sea research facility encounter alien intelligence in the form of a "water tentacle" that snakes through corridors and mimics human facial expressions while its "skin" reflects the environment around it.

Williams had been flown in from Canada on a work visa by Industrial Light and Magic specifically to animate that sequence because Cameron believed that he was the only person who could pull it off. He exceeded expectations and was rewarded by Cameron with the job of supervising the "morphing" transformations of the T-1000 Terminator (Robert Patrick's bad guy) in 1991's "Terminator 2: Judgment Day." This led to Williams working on Steven Spielberg's original "Jurassic Park," supervising the shots where computer-animated dinosaurs are seen full-frame, sometimes in daylight.

We all know where that movie ultimately led the industry. However, one of the most fascinating things about the "Jurassic Park" sections of the film is the mixed feelings that Williams and his colleagues share about the CGI revolution that the movie unleashed. They're hugely, justifiably proud, and people at the center of the transformation (including Williams' colleagues and supervisors at ILM) light up when they talk about being at the center of a technological revolution that eclipsed old-fashioned optical special effects techniques, such as miniatures, animatronics, model-making, optical printing, and stop-motion animation.

Major special effects figures from earlier filmmaking eras weren't quite out of a job after Williams' genius captured moviegoers' imaginations—ILM boss Dennis Muren, who rose to prominence on the original "Star Wars" trilogy and won multiple Oscars for supervising blockbuster effects, is one of the many masters who basically became managers/executives rather than innovators, not so much learning and adapting to new techniques as overseeing a younger generation of technicians who were truly breaking ground. The older techniques—such as stop-motion and "go-motion" miniature puppets, exemplified by Phil Tippett, who oversaw the Imperial Walkers, the Rancor pit monster, the ED-209 battle droid from "Robocop" and other iconic movie creations—would still be used, but often as references that would be “finished” with computers.

The technology would've come into Hollywood in a big way eventually. But it happened faster because Lucasfilm executive Kathleen Kennedy and then Spielberg watched a dinosaur movement test that Williams had cooked up on his own time, after being warned that his services weren't needed because the project's visual effects would be traditional. That test reel put the technology at the center of the first "Jurassic Park" and made it probably the most important special effects-driven movie since the original "Star Wars."

More than one interviewee in the film expresses a variation of "be careful what you wish for because you just might get it." Tippett, who is interviewed in his model shop, seems mostly bitter about CGI in his interviews for this documentary, not just because it cut into Tippett's specialty, but because it made studio heads think of CGI as a kind of "magic bullet" that would lure audiences with the promise of spectacles previously unimagined, but mainly led to bloat, hollow spectacle, and special effects sequences full of unnecessary clutter and unbelievable physicality that lacked the depth and heft of real objects. His feelings are echoed by many of the then-young turks who worked alongside the brash young Williams in the '80s and '90s and saw elders like Tippett and Muren as both inspirations and career obstacles (because of their territoriality within ILM).

The movie pays lip service to the idea that there are always three versions of a story—yours, mine, and the truth, basically—but the filmmaking still can't help somewhat buying into Williams' story of being an unappreciated genius who was robbed of his rightful credit (and glory) so that people like Tippett and Muren could be praised for the work Williams mostly did. That's not to say that Williams' claims have no merit—it's objectively clear that, in some sense, he truly did get screwed. His story somewhat evokes that of Millicent Patrick, who designed the Creature from the Black Lagoon only to watch Universal Studios makeup department head Bud Westmore claim all the credit (at least Williams didn't have to deal with sexism on top of it all).

It's unclear whether the revolution that came about due to Williams' work was objectively any worse for the art of motion pictures than earlier tech revolutions, such as color or sound, or the first wave of modern visual effects showcased in "2001: A Space Odyssey." It's possible that it's not the technology itself that is the enemy of art but the ways in which it is misapplied (slathered on, sometimes) by the unimaginative bosses of entertainment conglomerates who see films and TV series as products only and falsely believe they know more about popular art than the people who make it. This movie doesn't make a case for CGI's singular impact (or awfulness). But there are times when it seems as if it's trying to. And it's not easy to tell whether that's due to a certain fuzziness in the vision (or in the editing) or because the director could never quite settle on his feelings about his larger themes.

That being said, there's no doubting the sincerity of emotion expressed in the historical-survey parts of the movie. Williams and other interviewees all have a bit of a Dr. Frankenstein-style "My God, what have I done!" mix of awe and regret when they talk about the current Marvel-dominated state of mainstream live-action blockbuster filmmaking, where nearly every frame involves some computer manipulation. The storytelling is mainly about generating excitement for being there and looking forward to the next installment rather than because of any internal artistic integrity or personal expression existing within the commercial mandates. That tension made Hollywood movies of earlier eras interesting, although they were primarily made with profit in mind -- sometimes even if they were terrible.

Williams himself is given a similarly whiplash-inducing treatment, with the film hovering between hero worship (it's too enamored with slow-motion shots of him ruggedly walking, or trudging, and futzing around in his workshop, blowtorching and hammering things) and a more detached, critical eye. However, it eventually settles into an observant, kind-yet-unmerciful groove, probably where it should have settled from the beginning. Williams' two exes and daughter are empathetic but unsparing in their assessment of his faults as a mate and parent, and his colleagues paint a picture of a genius who indeed did have problems fitting into bureaucratic structures but made things worse for himself by being a raging asshole who couldn't accept decisions that went against his impulses.

The film's final act is so bleak and insightful that it retroactively elevates what might otherwise have felt like an unnecessarily prolonged DVD extra built around a compelling but borderline insufferable screen character who, by his own admission, lacks self-control and the ability to learn from his mistakes. The most blistering assessment comes from Williams himself, who at the time of filming had been to rehab three times (there's no coda indicating whether his third time stuck) and is shown stumbling drunkenly around his house and workshop, muttering to himself. Some of this footage is so painful that it borders on too much, though it feels instructive because of Williams' reckoning with his weaknesses and missteps.

Williams videotaped himself and his family life quite often throughout the years, and it's incredible how unflattering a lot of the culled footage is to the man who captured it—just as damning, really, as the footage the director got of Williams immolating himself on camera, beer can in hand, pontificating and cursing and bumping into things. "I'm always the f**kin' same. Always," he obliviously brags during an interview that, moments earlier, had been at least somewhat honest about the impact of his drinking and bullying, showboating behavior on his relationships and career. "Why, why, why are you loaded so much?" his second ex-wife, animator Ellen Schade, yells at him through a speaker phone in home video footage taken during the early aughts. "I f**king blew it," Williams slurs later as he unsteadily tries to step into a shower stall. Later he confesses, "I've never been an adult."

That, ironically, is what made Williams' mentality and unique skill set so perfect for a blockbuster era that turned the art of replicating childlike awe into a business model. They refined it a little bit more with each decade until theaters had little space left for movies that might have something to offer viewers who were indeed adults, and wanted to watch other adults in stories about hard choices with no easy outcomes. 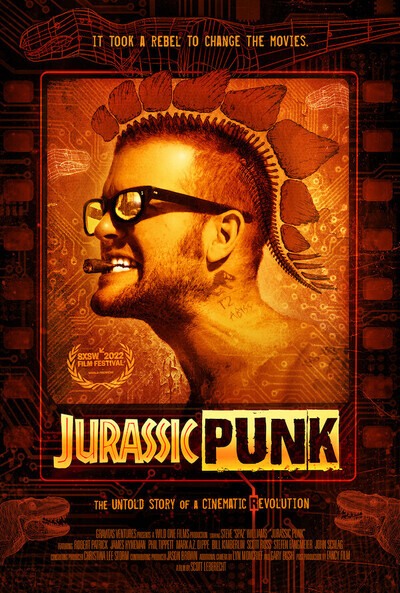 Steve 'Spaz' Williams as Self

Phil Tippett as Self

Jamie Hyneman as Self

Mark A.Z. Dippé as Self

Tom Bertino as Self

Geoff Campbell as Self

Stefen Fangmeier as Self

Douglas S. Kay as Self

Bill Kimberlin as Self

Van Ling as Self

Michael J. Natkin as Self

John Schlag as Self

John T. Van Vliet as Self

Harold Weed as Self