Jumanji: The Next Level

Like its predecessor, this latest "Jumanji" movie combines fantasy action and adventure with some comedy, a touch of romance, and real-life lessons about courage, friendship, and empathy—all with the help of some low-key race and gender fluidity.

At the end of the last film, the four high school students who got sucked into an old-school video game console and found themselves turned into archetypal adventure heroes (some more heroic than others), were so happy to get home that they smashed the game. But the movie made a lot of money, and so the game is operational again, and this time the now-college-age kids are joined by a couple of old-school characters.

Spencer (Alex Wolff) is now a freshman at NYU. Maintaining his romance with Martha (Morgan Turner) long-distance has been rocky and as he returns home for Christmas break he is not sure whether they are on or off. Spencer's grandfather Eddie (Danny DeVito) is recuperating from hip surgery, so he is in the house, too, along with his stair lift, hospital bed, and CPAP machine. Eddie's estranged former business partner Milo (Danny Glover) comes over to try to repair their relationship, but Eddie is not interested.

Spencer misses the confidence he had as the video game avatar Dr. Smolder Bravestone (Dwayne Johnson). And so, he goes back inside the game where the life and death challenges somehow seem more familiar and easier to handle than real life. When he does not return, Martha, Bethany (Madison Iseman) and Fridge (Ser'Darius Blain) re-enter the game to rescue him. There's a bit of a switch, though. The game is once again up to mischief, and this time, while Martha is again dance-fighting expert Ruby Roundhouse (Karen Gillan), it is Eddie who shows up as Dr. Bravestone. Milo is the weapons knapsack-carrying Mouse Finbar (Kevin Hart), while Fridge is the former Bethany avatar, pudgy map-expert Dr. Shelly Oberon (Jack Black). No one knows where Bethany is.

Once again, each of the avatars has three bars on the wrist, one for each life the game allows. A few of those lives get used up right away as Martha/Ruby tries to explain to the befuddled Eddie and Milo what is going on.

Like all good video games, this level is more difficult than the last. The production design by Bill Brzeski is stunning and thrillingly imaginative, while the stirring music from Henry Jackman suggests not just the best in video games but the most fondly remembered classic adventure films. Following the first movie's jungle adventure, this sequel takes them through the desert and to a castle on an icy mountaintop, with hold-your-breath perilous travels by dune buggy, rope bridge, and zeppelin. There's danger from snakes, ostriches, and boobytraps. There's also a new villain, a massive Hun-like conqueror named Jurgan the Brutal (Rory McCann). This level's goal is to capture a jewel that Jurgan stole from gentle indigenous farmers.

Eventually Bethany and the character they rescued in the first film, Alex (Colin Hanks), show up in the game, too. Alex is back with his previous avatar, Seaplane (Nick Jonas), but Bethany is a whole new character, and so, when they finally find him, is Spencer. I won't give those away; I'll just say that the most fun of this film comes when Johnson, Gillan, Hart, Black, and, a terrific new addition, Awkwafina, get to cycle through different character/players. The script does a good job of keeping the age, race and gender switches low-key. There's some brief schoolyard-style crude humor but thankfully it's never shrill or archly coy.

Johnson was terrific as Spencer in the first film, a humorously exaggerated version of an adolescent discovering the power of adulthood. But as the outer version of Spencer's cranky grandfather, he's clearly having more fun. He barely notices the surreal concept of being trapped inside a video game (he does not appear to be entirely sure what a video game is), and is much too busy swiveling hips that for the first time in years have a full range of motion. Johnson/Bravestone as Spencer was something to aspire to, in a future that still seemed filled with infinite potential, but Johnson/Bravestone as Eddie is filled with the bucket list delight of someone who sees nothing but loss ahead. Hart is especially good at toning down his usual peppery energy as the avatar for the slow-talking Milo, whose avatar's strength is languages but who retains his discursive style. Black and Awkwafina both have a chance to represent more than one of the human characters, making each one distinct and clever.

The fantasy of the avatars, with their assigned strengths and weaknesses, make it possible for the characters to become more honest with themselves and each other. As with the first film, the humor and excitement are nimbly balanced so it never gets too scary or silly, and the focus is more on friendship than romance. This time, there is a light touch of poignance as well that makes the message about friendship more meaningful. And like all good video games, there's a hint of yet another level at the end for those, like me, who are not yet ready to say Game Over. 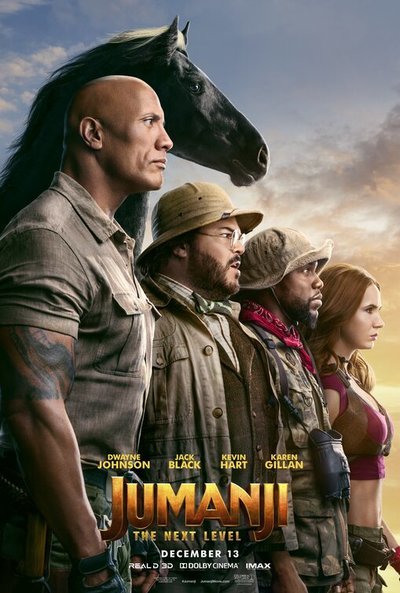 Rated PG-13 for adventure action, suggestive content and some language.