Orson Welles famously said that, in preparing to direct “Citizen Kane,” he studied the Old Masters: “John Ford, John Ford and John Ford.” In the work of Spain’s Pedro Almodóvar, an innovator who’s also a cinema-classicist, one can detect the influence of various masters, from Alfred Hitchcock to Douglas Sirk. But at this point we must also recognize another master associated with his oeuvre: Almodóvar himself.

“Julieta,” Almodóvar’s 20th feature and his best, in my view, since “Volver” a decade ago, is a film of such quietly assured mastery that it reminds you American cinema today has virtually no one comparable to him: an artist who exercises total control over his work, employs a filmic idiom derived largely from the lushest productions of classic Hollywood, and operates in a fictional realm of his own creation.

Granted, he’s no longer as fashionable as the post-modern provocateur of “Matador,” “Women on the Verge of a Nervous Breakdown” and “Tie Me Up! Tie Me Down!” Yet the mature mastery of “Julieta” exhibits a higher, more refined level of accomplishment than those films, as must be recognized by anyone who doesn’t confuse youthful insouciance with real artistry. Surely, any filmmaking teacher trying to instruct a class of young Orson Welleses today in the subtleties of film craft could find few models better than “Julieta.”

Like most Almodóvar films, this one centers on women. Its narrative premise can be simply stated: a woman faces the painful mystery of her long alienation from her daughter. But this is only the germ of a drama that grows steadily richer, more resonant and complex as the filmmaker elaborates it.

As usual for Almodóvar, the film opens with images that feel strikingly significant. We see folds of rich red fabric swaying against each other, almost like the bodies of lovers. What seems inscrutable, though, is soon revealed to be the gown of Julieta (Emma Suárez), a middle-aged, middle-class woman who soon takes a small sculpture and swathes it in bubble wrap. At home in her chicly minimalist Madrid apartment, she’s soon visited by the man in her life, Lorenzo (Darío Grandinetti), who wants to discuss their upcoming vacation to Portugal. But this is a getaway that’s not to be.

That’s because her seemingly happy and settled life is suddenly derailed by a chance encounter. One day, she runs into a very fashionable young woman who says she has seen Julieta’s daughter at Lake Como and that she now has three kids. Stunned by this news, which signals that it’s been a long time since mom saw her progeny, Julieta falls into depression, finding her mind thrown back into the past.

Three decades earlier, Julieta (now Adriana Ugarte), an attractive and adventurous classics teacher, sets off on a nocturnal train trip that will change her life. When an older man tries to chat, she flees to the bar car, where she meets Xoan (Daniel Grao), a handsome young fisherman. The two make love that night, but something else happens: the man she first met commits suicide—creating a spark of guilt that will take other forms later in the story.

It’s a story that ranges over many years and various locales. When Julieta moves in with hunky Xoan in his pretty Galician seaside cottage, she finds life complicated by the proximity of a beautiful female artist friend of his (Inma Cuesta) and a Mrs. Danvers-like housekeeper (Almodóvar regular Rossy de Palma) who seems to resent anyone else’s happiness. Julieta and Xoan have a daughter, Antía, who has a happy childhood. But after family disruption propels a move to Madrid when the girl is a teen, an abyss begins to open between her and her mother.

A while later, Antía leaves home for a “retreat” in the Pyrenees, and when Julieta goes to pick her up, she’s told her daughter no longer wants to see her. She discovered her life “lacked a spiritual dimension” and has found something she missed: faith.

I must confess that I’ve been very up and down about Almodóvar’s films over the years, but one of the pleasures of following his work is seeing how he continues to evolve. No film is just like any other. Of this one, he has said in the film's press notes: “I’ve contained myself very much in the visual composition, in the austerity of the supporting characters. No one sings songs. Nor do I introduce scenes from other films to explain the characters. There isn’t the slightest trace of humor, or any mixing of genres, or so I believe. From the outset I had in mind that ‘Julieta’ is a drama, not a melodrama, a genre to which I’m partial. A tough drama with a hint of mystery: someone who’s looking for someone without knowing why she left.”

That gives a concise picture of some of the qualities that set “Julieta” apart from others of his films, but “austerity” shouldn’t be taken to mean that he’s gone all Bressonian us. There’s a luxuriance to both the storytelling and the visual manner of the film, but it’s a luxuriance without flamboyance or cheekiness. Almodóvar stages scenes economically and elegantly, in such a precise way that they could indeed be used as classroom examples. Along with cinematographer Jean-Claude Larrieu and editor José Salcedo, his collaborators include composer Alberto Iglesias, whose haunting score I think is the best I’ve heard in a movie this year.

The two actresses who play Julieta deserve commendation, both for their individual excellence and for the way that Almodóvar blends their performances. Honestly, when watching the film, I couldn’t be sure whether I was seeing two women or one transformed by makeup and special effects. That almost uncanny seamlessness is a marvel in itself.

Almodóvar’s script was based on three stories by Alice Munro, and for a while he considered making it in her native Canada. That he ended up back in Spain is of course altogether fitting. He may share Catholic roots with Hitchcock and Bresson, but this film’s concern with guilt, transference, fate, mystery and (more obliquely) faith connects intricately with his native culture as well as the ideas expressed in his previous films. Building on his previous work while also charting a new course, it is suffused with the casual confidence of an established master. 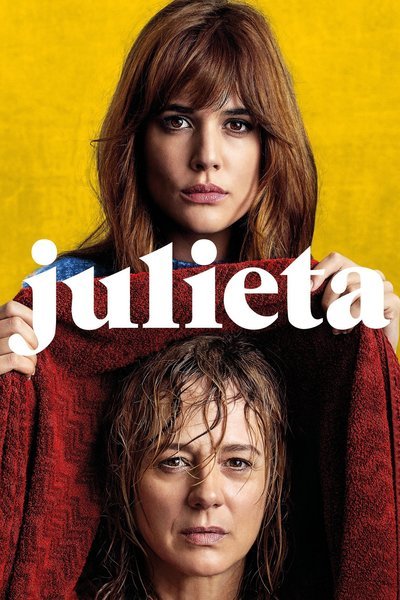