“You know what the difference is between you and me, Violet?”

This classic exchange between the lovestruck heroines in Lana and Lilly Wachowski’s deeply satisfying 1996 thriller, “Bound,” is more than just clever wordplay. The film was released long before its writer/directors, who previously identified as male siblings Larry and Andy, publicly came out as transgender women, a revelation that brought newfound meaning to their recurring exploration of identity and its inherent fluidity. Their polarizing 2012 opus, “Cloud Atlas,” may be the most radical statement ever made by a big-budget Hollywood film regarding the malleability of external features that have been used to define us. By casting well-known actors against type—inviting them to transcend their own physicality by playing different ages, races and genders—the Wachowskis crafted an indelible illustration of how our inner truth remains constant even as we continue to evolve on the outside. There is no difference between Lana and Larry or Lilly and Andy, apart from a change in appearance.

Among the most enlightening narratives now receiving increased visibility are those penned by artists identifying as non-binary. The singular gender-neutral pronouns—they, their, them—with which they prefer to be cited stand as a rebuke to conventional definitions of male and female selfhood. Currently breaking ground on television is Lachlan Watson, a superb actor who has been invited to steer the narrative of their non-binary character, Theo (previously Susie), on Netflix’s “Chilling Adventures of Sabrina.” Theo’s decision to come out as a transgender man during Part Two of the series’ first season made for such a compelling arc that there’s no question the character, and Watson, sorely deserve their own show. What I found most intriguing about Justin Kelly’s “J.T. LeRoy,” from the outset, was the fact that its widely publicized story was told from the perspective of its non-binary protagonist, Savannah Knoop. Not only is the film based on Knoop’s 2008 memoir, Girl Boy Girl: How I Became J.T. LeRoy, it was also co-written by them in collaboration with Kelly.

My only familiarity with the real-life story serving as the film’s foundation comes courtesy of Jeff Feuerzeig’s galvanizing 2016 documentary, “Author: The J.T. LeRoy Story,” which details the six-year-long scheme hatched by author Laura Albert to convince the world that her sister-in-law, Knoop, was the teenage boy secretly serving as her own literary persona. Imagine if Sia used Maddie Ziegler as not just an artistic doppelgänger, but an actual stand-in, therefore making it seem as if a teenager had written all her songs, and you’ll get a sense of the weirdness at play here. The picture is a fascinating dissection of Albert’s psychology, drawing clear connections from the abuse she experienced as a child to her need for a young male “avatar.” Shamed by her molester into feeling like a “bad girl,” because of the momentary pleasure his abuse instinctively triggered in her, Albert was comfortable recounting her memories over a suicide hotline only in the voice of a boy, who would go by the name of “Jeremiah” or “Terminator.” Thus, J.T. LeRoy was birthed by the author as a way to give voice to her wounds, the kind that have routinely labeled men as victims and women as loose. Though the work she wrote under LeRoy’s pseudonym earned global acclaim, his consistent failure to make public appearances threatened to upend the lucrative enterprise, thus necessitating the need for Knoop.

In order to shadow LeRoy at events, Albert inhabited the role of his British manager Speedie, a flamboyant persona spawned from the author’s stated desire to overcompensate for her weight pre-gastric-band surgery. Since Feuerzeig’s film is primarily interested in providing a platform for Albert to share her side of the story, a star-studded odyssey that resulted in outrage followed by a lawsuit, Knoop remains an enigma throughout, appearing briefly as a reluctant talking head only toward the end. That’s why the premise of Kelly’s movie is so enticing, allowing us to view this thoroughly unorthodox partnership through Knoop’s fidgety yet unwavering gaze. Expectations are quickly subverted once Knoop, as played by Kristen Stewart, doesn’t hesitate in referring to themselves as a girl, when first pitched the masquerade by Albert (Laura Dern). Unlike in “The Wife” and “Colette,” two recent films about brilliant women who agree to ghostwrite their husband’s books, the writer and the user in “J.T. LeRoy” are one and the same. It is largely to the credit of Dern’s excellent, richly textured performance that Albert doesn’t come off as a monster, though there’s no question Knoop paints her in a less sympathetic light than the documentary did. Glossing over the particulars of the abuse endured by Albert, Knoop’s chief interest lies in exposing the manipulative games that the author utilized to wield control over her avatar. A petty adolescent one minute, a loving maternal figure the next, Dern’s Albert is a textbook study in mixed signals.

Many of the biggest laughs arrive courtesy of Speedie, whom the actress has a ball playing to the hilt, such as when a photographer brings LeRoy’s favorite sweets to a shoot, and the cheery faux manager swipes them from his grasp, claiming, “I lahk them too!” Such scenes are very entertaining, yet little attempt is made to get at the deeper emotional scars that fueled this persona. More revealing are the glimmers of Albert’s humanity that emerge during Dern’s numerous potent monologues, especially one where she has a bout of déjà vu while visiting the film set of a LeRoy adaptation (which the author references in the Feuerzeig doc), and another delivered at a book signing where she echoes the experiences of the genderqueer community by observing, “There is no promise that we will be in sync with our designated body.” Considerably more villainous is Eva (Diane Kruger, evoking the icy monarch she portrayed in “Farewell, My Queen”), the celebrity opportunist who sweet-talked her way into snagging the movie rights for LeRoy’s The Heart Is Deceitful Above All Things. Eva’s real-life avatar is obviously Asia Argento, who was accused last year of rape by Jimmy Bennett, the underage actor who played young LeRoy in her film, a fact that makes Kruger’s infatuation with boy author Stewart all the queasier, no matter how much of it is manufactured.

Like many movies about literary figures, “J.T. LeRoy” flies too quickly through Albert’s prose, never lingering long enough for viewers unfamiliar with the text to grasp what makes it so powerful. Yet as Knoop reads one of the books, Stewart’s face subtly twitches with emotion, providing us with an intimate view of what the work meant to them. All the while, Dern speaks as LeRoy in a low, Southern drawl reminiscent of her narration for Anjelica Huston’s great “Bastard Out of Carolina,” another shattering portrait of child abuse. Though Feuerzeig’s picture remains the definitive chronicle of Albert’s creative process and the personal demons that informed it, Kelly’s film brings us at least a half-step closer to understanding Knoop’s motivation for keeping the ruse alive. Just as Kelly’s terrific debut feature, “I Am Michael,” recounted the fact-based tale of a man who went against his true nature in order to gain acceptance, this movie is also preoccupied with the consequences and rewards of living a lie. For Knoop, however, the truth that rises to the surface when cloaked in LeRoy’s thick glasses and Warhol-esque wig has nothing to do with deception. After removing her disguise in front of Eva, revealing her face in all its vulnerability and amorous desire, Stewart allows Knoop, for perhaps the first time, to appear comfortable in their skin.

What this film seems to suggest is that the experience of being LeRoy was as profound a journey of self-discovery for Knoop as it was for Albert, unearthing parts of themselves that had long been buried. At a time when the long-overdue rallying cry for representation has inadvertently limited the type of stories artists have the permission to tell, depending largely on their outward identity, the success of LeRoy’s work—and the countless lives it mirrored—stands as undeniable proof that art should never be constrained by the boundaries of one’s experience. Albert did not have to be a boy in order to channel one, and the same could be said of Knoop. While fielding questions from the press, LeRoy is cross-examined by a French journalist who has doubts regarding the author’s alleged gender, and the pitch-perfect response he gives is encapsulated by the line, “I can be whomever I want to be.” In that moment, can you tell the difference between Savannah Knoop and J.T. LeRoy? Me neither. 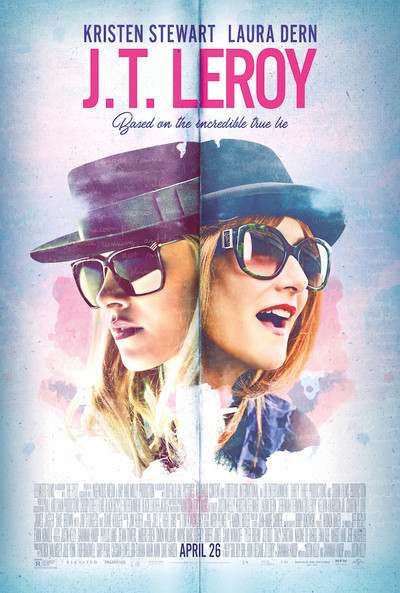