Raise your hand if you were waiting for another Rowan Atkinson movie about the bumbling British spy, Johnny English.

Yeah, me neither. But here we are. Johnny English is striking again, 15 years after the first movie, and seven years after the sequel. Through all of that time, there has been just one joke.

It’s a pretty good joke. It could probably work well as a sketch comedy bit. But it gets tired fast, even with lots of glamorous locations, elaborate slapstick, and Emma Thompson. The film runs out of ideas so quickly that Atkinson literally resorts to dropping his pants to get a laugh from his saggy bare bottom.

The joke is this: Johnny English (Atkinson) is a supremely confident and supremely incompetent spy. He is also thoughtless, clueless, and hapless, but somehow lucky when it comes to saving the day. In this episode, he has retired and is teaching at one of those boarding schools in a picturesque British countryside. There is a flicker of interest as we see him instructing his young pupils in spycraft, and for a moment we think there is some potential here with him as a sort of Dumbledore for a Hogwarts of spy kids. But no such luck. We are stuck with the bumbling but smug aging spy and his inexplicably devoted sidekick.

English is called back into service because a cyber-attack has exposed every agent in the field and most of the other retired agents are either “dead, having hip operations, or recovering from prostate surgery.” If you think that is hilarious, this movie is for you.

The G12 meeting of world leaders is about to take place and the Prime Minister (Thompson) is desperate. She becomes even more desperate after English accidentally dispatches all of the other retired spies (played by old pros Michael Gambon, James Fox, and Charles Dance). Because she has no other choice, she sends English to find out where the attacks are coming from.

As in all spy movies, we have to see him pick up his equipment. The Q equivalent tries to give him safety warnings and a hybrid car, but English is old school and will take nothing connected to the Internet, either to protect himself from cyber-espionage or because he has no idea how they work. Actually, both. English also picks up his sidekick, Bough (Ben Miller), who had been all but forgotten at a desk in what looks like a supply closet. They grab the vintage Aston Martin, pop in a mixtape cassette, and drive off to France. They have to go undercover as waiters, which for some reason they think means speaking English with French accents, and of course it ends up with a flambé dish going terribly, terribly wrong.

There is a funny bit when English and Bough use super-magnetic boots to climb up the side of a ship called the Dot Calm (get it?) and the chefs in the ship’s galley find their steel kitchen tools flying toward the hull. The ship belongs to a “Silicon Valley billionaire who once dated a Kardashian,” (Jake Lacey as Jason Volta), the very same person the Prime Minister wants to save England from the increasingly destructive and embarrassing cyber-attacks that are creating havoc with traffic lights and bank records.

The movie is just a series of overlong skits with the same premise: Johnny English remains unruffled and supremely confident as he creates chaos all around him. Sometimes that means cleverly choreographed stunts, as when a virtual reality briefing goes wrong. Sometimes it means he has to clunk around in a suit of armor for 20 minutes and then his pants fall down. There are a few laughs along the way, and there is the great pleasure Thompson’s furious bite on phrases like “that tsunami of tosspots we call the national press.” But Atkinson is much better in small doses, as in “Four Weddings and a Funeral” (the malapropism-prone clergyman) or “Love Actually” (the elaborate gift-wrapper). Let’s hope that this is the last strike for Johnny English. 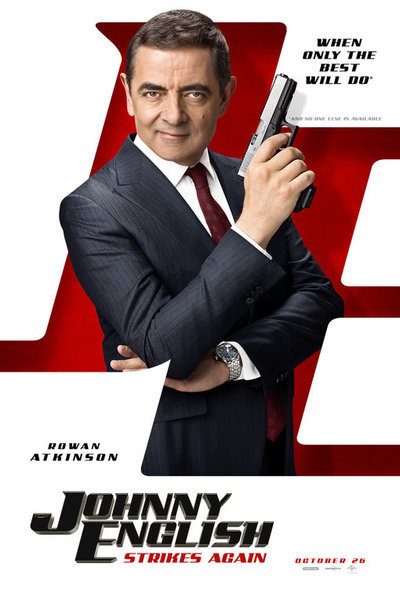