JFK Revisited: Through the Looking Glass

Oliver Stone has not left the assassination of John F. Kennedy behind. One of his best films, 1991’s “JFK” became a major event in the analysis of the death of one of the most popular world leaders in history, adding fuel to the fires already burning around The Warren Commission Report that, bluntly, a lot of people don’t believe. Three decades after that narrative feature that's as much about obsession as it is assassination, Stone has returned with a documentary that basically reiterates many of the details of the case with a heavy focus on what’s been learned via declassified reports, books by witnesses, and other analysis in the last 30 years.

Playing in theaters today and on Showtime's streaming app, and airing on Showtime on the anniversary of the assassination on November 22rd, “JFK Revisited: Through the Looking Glass” is an exhaustive and sometimes exhausting documentary, a film that can sometimes feel like it’s so packed with information and detail that Stone has lost the path through this dense forest of conspiracy theories. At its best, it reminds one how tightly Stone can assemble a film like this one as he makes a convincing case that some things about the assassination of JFK don’t add up. At its worst, it can be like a drunken conversation, moving wildly from point to point in a way that gives you no time to stop and ask some pertinent questions. One thing is true in both cases—it’s never boring. And our true crime-obsessed era seems primed to revisit one of the most famous crimes of all time.

Stone was smart to basically divide “JFK Revisited” into two hour-long chapters—it leads one to wonder if he wasn’t considering making this into a docuseries instead of a film. The first half, narrated by Stone and Whoopi Goldberg, focuses heavily on the evidence of that day in 1963—ballistics, exit wounds, reports from people who saw Kennedy’s body. Was the bullet entry wound in the back, as the Warren Commission asserted, or in the front, as several witnesses claimed after seeing the body? Why are the memories of the state of Kennedy's brain different than the photographs? And how does one possibly explain the retrieved bullet that reportedly went through Kennedy and hit John Connally looking practically pristine when it was recovered? Stone’s approach is to layer inconsistency on inconsistency. Some don’t add up to much—a witness is not going to be able to remember exactly how long it took her to descend the book depository stairs on a good day much less a historic one—but there is an unsettling sense that, at the very least, mistakes were made in the investigation. (Just the chain of custody of some of the evidence was clearly messed up.)

The second half of “JFK Revisited,” narrated by Donald Sutherland (who had a pivotal role in “JFK”), isn’t as strong because it feels more rushed and leans into some of the wilder ideas with less focus. In this half, Stone sets out to provide motives for an assassination and cover-up, basically pointing the finger at the CIA. He flies down the rabbit hole of history, compiling stories about Castro, Vietnam, and the Military-Industrial Complex in a manner that sometimes feels haphazard, and then he ends far too abruptly, suggesting that conspiracy and assassination destroys the fabric of society without really digging into what that means in 2021.

Stone can get a little too confident for his own good—“Conspiracy theories are now conspiracy facts,” he says in one such moment—but when one has devoted as much of his life to the death of Kennedy as the Oscar-winning director has then hesitancy isn’t an option. I was concerned going into the film that Stone’s obsession would lead to a documentary that only he could understand—conspiracy theorists have a habit of foregoing accessibility to those who haven’t read dozens of books on the subject—but I was reminded how expertly Stone can orchestrate a film like this one, even as the second half was spinning theory after theory. Most of all, I was left thinking that this isn’t so much Stone's final word on the subject as it is a hope to restart the conversation.

In limited theatrical release today and on the Showtime app. On Showtime on November 22nd. 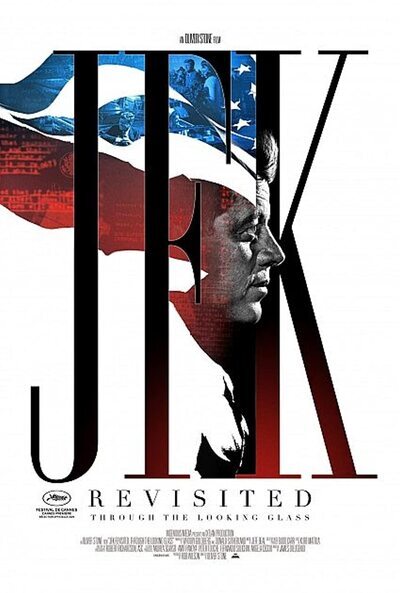 JFK Revisited: Through The Looking Glass (2021)

Oliver Stone as Self

David Mantik as Self

Cyril H. Wecht as Self