Oliver's Stone's "JFK" builds up an overwhelming head of urgency that all comes rushing out at the end of the film, in a tumbling, angry, almost piteous monologue - the whole obsessive weight of Jim Garrison's conviction that there was a conspiracy to assassinate John F. Kennedy. With the words come images, faces, names, snatches of dialogue, flashbacks to the evidence, all marshaled to support his conclusion that the murder of JFK was not the work of one man.

Well, do you know anyone who believes Lee Harvey Oswald acted all by himself in killing Kennedy? I don't. I've been reading the books and articles for the last 25 years, and I've not found a single convincing defense of the Warren Commission report, which arrived at that reassuring conclusion. It's impossible to believe the Warren report because the physical evidence makes its key conclusion impossible: One man with one rifle could not physically have caused what happened on Nov. 22, 1963, in Dallas. If one man could not have, then there must have been two. Therefore, there was a conspiracy.

Oliver Stone's new movie "JFK" has been attacked, in the weeks before its release, by those who believe Stone has backed the wrong horse in the Kennedy assassination sweepstakes - by those who believe the hero of this film, former New Orleans district attorney Jim Garrison, was a loose cannon who attracted crackpot conspiracy theories the way a dog draws fleas.

The important point to make about "JFK" is that Stone does not subscribe to all of Garrison's theories, and indeed rewrites history to supply his Garrison character with material he could not have possessed at the time of these events. He uses Garrison as the symbolic center of his film because Garrison, in all the United States in all the years since 1963, is the only man who has attempted to bring anyone into court in connection with the fishiest political murder of our time.

Stone's film is hypnotically watchable. Leaving aside all of its drama and emotion, it is a masterpiece of film assembly. The writing, the editing, the music, the photography, are all used here in a film of enormous complexity, to weave a persuasive tapestry out of an overwhelming mountain of evidence and testimony. Film students will examine this film in wonder in the years to come, astonished at how much information it contains, how many characters, how many interlocking flashbacks, what skillful interweaving of documentary and fictional footage. The film hurtles for 188 minutes through a sea of information and conjecture, and never falters and never confuses us.

That is not to say that we are quite sure, when it is over and we try to reconstruct the experience in our minds, exactly what Stone's conclusions are. "JFK" does not unmask the secrets of the Kennedy assassination. Instead, it uses the Garrison character as a seeker for truth who finds that the murder could not have happened according to the official version. Could not. Those faded and trembling images we are all so familiar with, the home movie Abraham Zapruder took of the shooting of Kennedy, have made it forever clear that the Oswald theory is impossible - and that at least one of the shots must have come from in front of Kennedy, not from the Texas Schoolbook Depository behind him.

Look at me, italicizing the word "must." The film stirs up that kind of urgency and anger. The CIA and FBI reports on the Kennedy assassination are sealed until after most of us will be long dead, and for what reason? Why can't we read the information our government gathered for us on the death of our president? If Garrison's investigation was so pitiful - and indeed it was flawed, underfunded and sabotaged - then where are the better investigations by Stone's attackers? A U.S. Senate select committee found in 1979 that Kennedy's assassination was probably a conspiracy. Why, 12 years later, has the case not been reopened? Stone's film shows, through documentary footage and reconstruction, most of the key elements of those 1963 events. The shooting. The flight of Air Force One to Washington. Jack Ruby's murder of Oswald. And it shows Garrison, in New Orleans, watching the same TV reports we watched, and then stumbling, hesitantly at first, into a morass of evidence suggesting that various fringe groups in New Orleans, pro and anti-Castro, may have somehow been mixed up the with CIA and various self-appointed soldiers of fortune in a conspiracy to kill JFK.

His investigation leads him to Clay Shaw, respected businessman, who is linked by various witnesses with Lee Harvey Oswald and other possible conspirators. Some of those witnesses die suspiciously. Eventually Garrison is able to bring Shaw to trial, and although he loses his case, there is the conviction that he was onto something. He feels Shaw perjured himself, and in 1979, five years after Shaw's death and 10 years after the trial, Richard Helms of the CIA admits that Shaw, despite his sworn denials, was indeed an employee of the CIA.

Most people today, I imagine, think of Garrison as an irresponsible, publicity-seeking hothead who destroyed the reputation of an innocent man. Few know Shaw perjured himself. Stone certainly gives Garrison a greater measure of credibility than he has had for years, but the point is not whether Garrison's theories are right or wrong - what the film supports is simply his seeking for a greater truth.

As Garrison, Kevin Costner gives a measured yet passionate performance. Like a man who has hold of an idea he cannot let go, he forges ahead, insisting that there is more to the assassination than meets the eye. Stone has surrounded him with an astonishing cast, able to give us the uncanny impression that we are seeing historical figures. There is Joe Pesci, squirming and hyperkenetic as David Ferrie, the alleged getaway pilot. Tommy Lee Jones as Clay Shaw, hiding behind an impenetrable wall of bemusement. Gary Oldman as Lee Harvey Oswald. Donald Sutherland as "X" (actually Fletcher Prouty), the high-placed Pentagon official who thinks he knows why JFK was killed. Sissy Spacek, in the somewhat thankless role of Garrison's wife, who fears for her family and marriage. And dozens of others, including Jack Lemmon, Ed Asner, Walter Matthau and Kevin Bacon in small, key roles, their faces vaguely familiar behind the facades of their characters.

Stone and his editors, Joe Hutshing and Pietro Scalia, have somehow triumphed over the tumult of material here and made it work - made it grip and disturb us. The achievement of the film is not that it answers the mystery of the Kennedy assassination, because it does not, or even that it vindicates Garrison, who is seen here as a man often whistling in the dark. Its achievement is that it tries to marshal the anger which ever since 1963 has been gnawing away on some dark shelf of the national psyche. John F. Kennedy was murdered. Lee Harvey Oswald could not have acted alone. Who acted with him? Who knew? 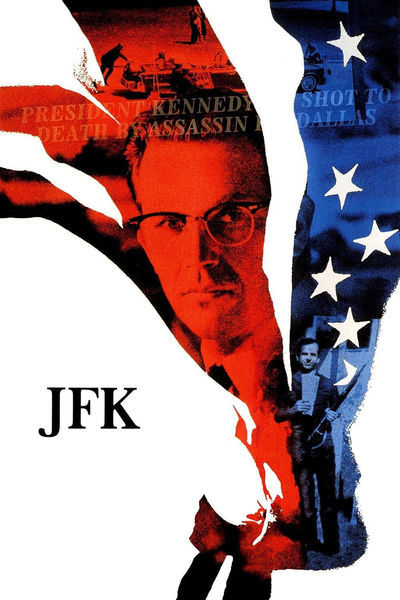