“Jay Myself” is the story of a guy who owns a six-floor, 35,000-square foot former bank building in NYC’s Bowery neighborhood, and has filled it mostly with junk. Hallways are adorned with random gadgets and tools, there’s a room filled with table legs, and the vault is packed with boxes of photographs. At the beginning of this documentary, it’s revealed that this owner has just sold the place for 55 million dollars, and thus begins the narrative process of watching him (and an army of movers) sort everything, pack it up, and move it on out. “Thank god he’s rich,” I kept thinking about this guy whose moving experience is considerably less hellish than the process was ever intended by Satan himself to be. Is it then charming enough that this owner, Jay Maisel, is a legendary photographer? Well … depends on how you look at it.

A key part to the hoarding of all this stuff is about perspective—Maisel likes to study something junky and see something anew; he speaks often about the difference between looking and seeing, and how color and light are changing qualities. There’s no grand scheme behind his collection—sometimes he takes pictures of his knickknacks—but mostly its just storage that he picks up and re-conceptualizes, while director Stephen Wilkes films him musing about it, accompanying the object with dreamy close-ups and a ponderous score. It’s all part of a tribute that Wilkes has ultimately constructed for Maisel and his work, but it’s just too whimsical of a narrative foundation.

Yet while “Jay Myself” will annoy anyone who pays too much in the city to live in a place that’s too small, photography students might find this documentary to be of use. Wilkes’ film also functions as a profile piece on Maisel, celebrating his career and many gorgeous snapshots of New Yorkers and their inner worlds, along with the many philosophies he has about the art form. It’s also interesting to hear from Maisel and his contemporaries talk about how Maisel brought his artistic eye to commercial work, and made big paydays without a sense of compromise—rarely has the tenuous mix of art and commerce felt like such a non-issue.

Wilkes has a personal connection to Maisel as well, having been a protege decades ago—from the beginning of this film, it becomes clear Wilkes isn’t going to test Maisel much beyond putting him on the other side of a camera. It also becomes clear that Wilkes loves Maisel's mess, and while Maisel made an incredible career of looking out at the world, Wilkes is occupied with endorsing, and not challenging, the bubble Maisel has made for himself.

The film has a grounded, jovial quality especially whenever we see images of Wilkes and Maisel from previous years; it's sometimes like a low-key comedy about one man's quirky mentor and buddy. And the pain of change within the passage of time is vivid as well, watching Maisel say goodbye to a home he’s had for 49 years. But any time "Jay Myself" ties that quaint sense of nostalgia to its spectacle of exorbitant bric a brac, it feels grotesque—it’s just damn near impossible to lament this man losing a building that he’s used mostly for mere curiosity, regardless of how many of his incredible photographs are on display inside.

There’s one brief moment in the documentary that feels like it doesn’t exist in Maisel’s bubble. It involves Wilkes on a crane across from Maisel's building, yelling at a worker in a reflective vest (and one of the doc’s very few non-white faces) on the street below. “I have the permit on me!” Wilkes screams down, camera in hand. “Whatever makes you happy, am I right?” the worker says back to him, before getting into his car, the abrasive scene ending.

This altercation is not explained, and it feels much more loaded than some Maisel-esque “slice of New York life” that Wilkes likely considered it to be. It looks like Wilkes barking at someone because his space, and his art, was in danger of being compromised. The inclusion of this episode—which does lead to Wilkes getting the poster’s shot of Maisel and his building—exemplifies the general tone-deaf approach this documentary has to the optics of privilege and space, all to extol someone whose hoarding is a form of privilege itself. Whether this is all for the sake of art or not, it can be too nauseating to peer into from the outside. 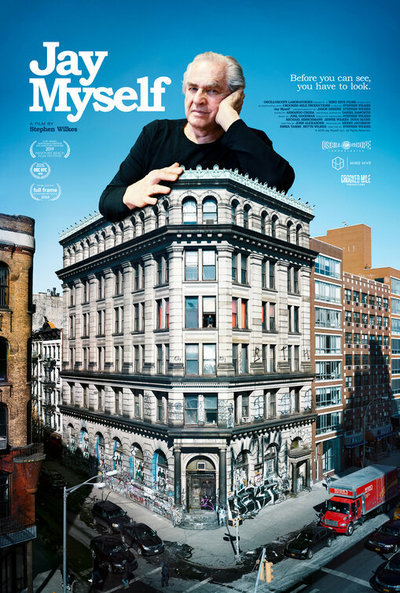 Jay Maisel as Himself