Gloom and doom rarely look as good as they do in “Jamie Marks Is Dead,” which was nominated for a Grand Jury Prize at Sundance earlier this year. With its eerie rendering of wintry landscapes in rural Upstate New York, this supernatural ghost story about a deceased high-school misfit who haunts a fellow student settles into a near-constant shivery clamminess that goes a long way to masquerade how little of dramatic import actually happens.

Fashion photographer turned filmmaker Carter Smith (who caused a ripple in the indie world with 2008’s gore-filled thriller “The Ruins”) knows how to build an unsettling, melancholy mood with shadowy corners, barren trees and overcast skies. The soundtrack trades off between starkly minimalist piano tinkling and an unnerving ambient throb whose volume shifts in accordance of what is occurring onscreen. And given how even the most hallowed halls of education today are too often beset with violence, both mentally and physically, Smith’s portrait of alienated youth in pain and craving acceptance is definitely in tune with the times.

But this not-quite-horror movie is so indulgently languorous—some might describe it as poetic and mournful while those who are less kind would dismiss it as plodding and downright depressing—it is likely to test the patience of many viewers. Those looking for cheap scares in an odd hybrid of “Donnie Darko,” “The Sixth Sense” and the restless-undead oeuvre of George Romero will be left unsated by this overtly sensitive wallow in adolescent angst.

Based on “One For Sorrow,” a much-praised 2007 young-adult novel  (which are being adapted at an alarming rate these days), the film opens with a teen rock collector named Gracie (Morgan Saylor) discovering the near-naked bespectacled corpse of Jamie Marks (Noah Silver) lying by the river near a bridge. Police suspect either a murder or suicide. A flashback shows track star Adam (Cameron Monaghan) in the locker room, witnessing his fellow jocks bullying Jamie in a bathroom stall. He is disturbed by what he sees, but fails to try to halt the abusive behavior.

Adam and Gracie meet at a makeshift shrine by the bridge. She invites him over to see her rock collection on display in her bedroom and he soon realizes that Jamie, still in his damp tighty-whities and visibly bruised, is hovering outside her window. While she is repelled by the vision, guilt-ridden Adam is drawn to it. Soon, Jamie is showing up in his closet and acting like his clingy best friend. It doesn’t take much imagination to realize that no good will come from having a soul mate who exists in a limbo-like netherworld as Adam increasingly withdraws from reality.

Other plot turns are equally disturbing and act as warning signs. Besides the fact that Adam’s older brother defines siblinghood at its cruelest and most callous, a parallel tragic event occurs when their single mother (and just when did Liv Tyler become old enough to play a character with two teen sons?) is left paralyzed after being hit head-on by a drunk driver.

As if Adam doesn’t have enough to deal with, his mom is now bosom buddies with the woman responsible for the accident (Judy Greer, in a role only slightly better than those Sprint ads where she has a hamster husband) that has left her in a wheelchair. The presence of Lucy, which he greets with seething resentment, obviously is supposed to echo his relationship with Jamie in some way, but that is as far as it goes.

There is also a statement about social class. Gracie, whose sexual aggression towards Adam is regularly subverted by an appearance by Jamie, lives in a mansion-like abode that is perpetually devoid of other family members. Meanwhile, Adam resides in a humble double-wide trailer home and must sniff the milk before pouring it on his cereal. The most ominous image found on the property is the gutted deer carcass that dangles from a free-standing basketball hoop.

The closest that “Jamie Marks Is Dead” comes to a fright-inducing scene involves a vengeful dead girl who goes after Adam after he commits a vicious act against her. Otherwise, whatever melodrama unfolds is primarily the responsibility of Silver and Monaghan, who do a fairly good job of making their strange connection a compelling one even if it is creepy in its intimacy. But if you are expecting an answer to the mystery of what exactly happened to Jamie Marks, you have come to the wrong film. 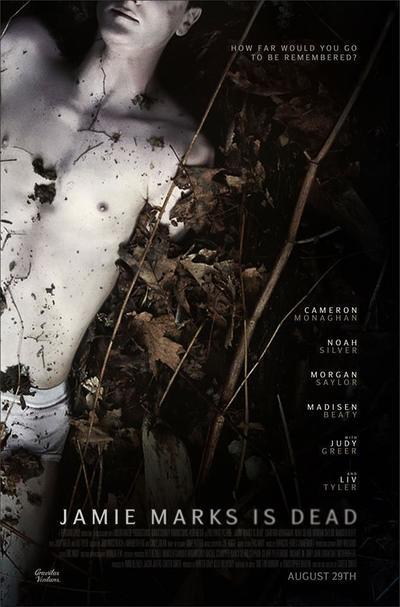