This movie left me reeling with turmoil and confusion, with feelings of sadness and despair. Those are the notes it strives for.

"Jacob's Ladder" enters into the hallucinations of a desperate mind, and lives there. It evokes a paranoid-schizophrenic state as effectively as any film I have ever seen. Despite an ending that is intended as victorious, the movie is a thoroughly painful and depressing experience - but, it must be said, one that has been powerfully written, directed and acted.

The story stars Tim Robbins, previously the pleasant young hero of such films as "Bull Durham," as an American soldier in Vietnam who undergoes a shocking battle experience. The actual nature of the experience is withheld until the end of the film - and even then, we cannot be completely sure we know the truth - but it appears to send him back into civilian life as a psychological time bomb.

Years pass. He gains a doctoral degree, but does not use it.

Instead, after a first marriage fails and a young son is killed in an accident, he goes to work for the U.S. Postal Service, and starts to live with a woman he meets there. Then terrible things begin to happen to him. He is nearly run down by a subway train. Almost run over in the streets. Faceless demons pursue him. His doctor is killed in an automobile explosion. So is a friend.

He begins to suspect that he and his Vietnam friends were victims of some kind of misbegotten Army experiment. That day of their bloody battlefield experience, they all grew dizzy and their heads began to spin, and then he cannot remember what happened next. He was wounded, yes, and airlifted to a hospital - and what then? Flashbacks throughout the film follow his emergency treatment. But what is the secret of what happened? He gathers a group of fellow veterans, and they talk to a lawyer about representing them, but then the veterans and the lawyer back out.

I ordinarily am more than a little impatient with movies that deal with hallucinations, with dream states and delusions, because I feel artificially manipulated; the filmmakers are jerking my chain, and often it's a lazy substitute for the bother of constructing an intelligent screenplay. "Jacob's Ladder" is so well made, however, that I didn't feel impatient this time, because I didn't have the opportunity. The movie lives right on the raw edge of insanity, and carries us along with it.

Coming out of the film, riding down in the elevator with some fellow critics, I got involved in a conversation about the underlying reality of the film. Was it all a flashback - or a flashforward? What was real, and what was only in the hero's mind? Are even the apparently "real" sequences the product of his imagination? More than this I should not say, because the film should have the opportunity to toy with you as it toyed with us.

Making a chart of the real and the imagined is not the point of "Jacob's Ladder," anyway. This movie is the portrait of a mental state, as Orson Welles' "The Trial" and Ken Russell's "Altered States" were. The screenplay is by Bruce Joel Rubin, who also wrote the completely different "Ghost," and I've read an essay by him in which he talks about his original ideas for the film, and the way they were translated into visuals by the director, Adrian Lyne.

Judging by the essay, Lyne has done a good job of determining what could be translated, and what could be safely left behind. Rubin's original material, with its visions of demons and heaven and hell, has been replaced by the more frightening notion that paradise and the inferno are all about us here on Earth, and that we participate in one or the other almost by choice.

The key performances in the film are by Robbins and Elizabeth Pena, who plays the woman he lives with. It's difficult to evaluate their work because the movie sets them the task of behaving in an utterly realistic, slice-of-life manner in many scenes (even some which are later revealed as hallucinations), and then coasting away into fearsome fantasy in other scenes. Pena achieves the difficult task here of creating a believable and even sympathetic woman while at the same time suggesting dimensions that the hero can only guess at.

Most films tell stories. "Jacob's Ladder" undoubtedly contains a story, which can be extracted with a certain amount of thought.

(Since the ending can be read in two different ways, however, the extraction process could result in two different stories). That isn't the point. What "Jacob's Ladder" really wants to do is to evoke the feeling of a psychological state in the audience. We are intended to feel what the hero feels.

A lesser film would have ended with some dumb denouement in a courtroom, or some shootout with government security guys. This is a film about no less than life and death, and Jacob seems to stand at the midpoint of a ladder that reaches in two directions. Up to heaven, like the ladder that God put down for the Biblical Jacob in Genesis. Or down to hell, in drug-induced hallucinations. This movie was not a pleasant experience, but it was exhilarating in the sense that I was able to observe filmmakers working at the edge of their abilities and inspirations. Not every movie has to be fun. 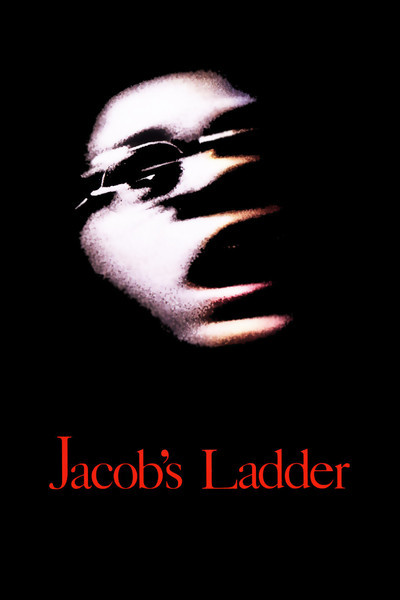