Most film lovers are savvy enough by now to realize that comparisons to Guy Ritchie, Quentin Tarantino, and the Coen brothers often lead to disappointment. For every "Lock, Stock, & Two Smoking Barrels" or "Pulp Fiction," there are dozens of films that try for that interlocking, crime-movie magic and fail miserably. And the more people try to mimic the style of QT or Joel Coen, the more apparent the high degree of difficulty in which those filmmakers succeed. It only looks easy, people. Which brings us to the latest darkly humorous blood bath with echoes of the icons—Magnus Martens’ "Jackpot." Based on a story by Norway’s leading crime writer, Jo Nesbø, "Jackpot" plays like an over-the-top story told by a drunken film fan at a bar: "Dude, I just saw this movie and it was CRAZY. You have to see it." Trust me, you don’t.

"Jackpot" opens with a car of guys running into a strip club/adult book store and getting promptly shot for their horniness. It turns out that they stumbled into a Mexican standoff, and their casting light into this always-dark establishment was the spark to light the match. When the bodies have cleared, only Oscar Svendsen (Kyrre Hellum) is alive, crawling out from under the body of a dead stripper, much to the surprise of hard-boiled detective Solør (Henrik Mestad). The cop takes Oscar into an interrogation room and the rest of the film plays like a version of Bryan Singer’s breakthrough, Oscar-winning flick "The Usual Suspects." I love films with unreliable narrators and just as we never knew what to believe in Verbal Kint’s account of the night before in "The Usual Suspects," the best elements of "Jackpot" force us to question if anything Oscar is saying is true.

Part of the reason for doubt is that the story the beaten Oscar recounts is an increasingly ridiculous one. As with so many cinematic bad days, it starts with a bet. Oscar and three of his ex-con buddies enter a soccer pool, betting on 12 games like a parlay bet, winning more based on the percentage they get right. Well, these lucky schmucks hit all 12, making them instantly wealthy. What happens when you throw the potential for immense wealth into a room with four morons with questionable moral compasses? Naturally, they start planning ways to pick each other off, deal with old debts, and try to avoid some of the even-more nefarious folks in their world. The body count piles up, the black humor is layered on thick, the blood flows.

Merely being violent and unpredictable does not make a film like "Jackpot" funny. Therein lies the biggest problem here: the laughs don’t come nearly to the degree required to make the complete lack of morality or interesting characters palatable. Watching bad people do bad things to each other requires a degree of wit that young filmmakers often lack. Being over-the-top does not necessarily make a film entertaining on its own. Crazy does not equal funny. And so as the bad behavior piles up in "Jackpot," the laughs simply don’t come and the whole thing becomes a remarkably tedious affair. There are performances here and there that strike the right tone (Mestad does seem to have walked out of a better film) and it’s easy to think that Nesbø’s unique voice worked in the source material (and works so much better in the superior "Headhunters," also based on one of his books) but by the time the inevitable final act twists are revealed, the sensation is not satisfaction but desire to watch one of the better films that led to the existence of this one. 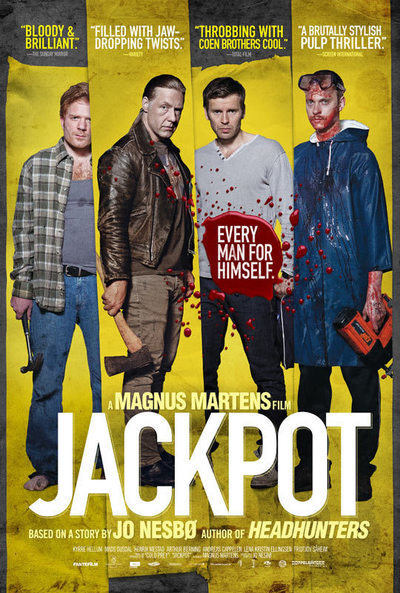