It's older than you think. In 1948, Allen Funt brought his radio program, "Candid Microphone" to that shiny new invention called television. Rechristened "Candid Camera," Funt's show specialized in playing tricks on regular people, from making their furniture do strange things to having former President Harry Truman walk up and ask them the time. His victims were always let off the hook with the show's catchphrase: "Smile, you're on Candid Camera!" The show ran, on and off, until 2004. Funt also directed an X-rated prank film called "What Do You Say to a Naked Lady?" which preceded the naughtiness and sexual humor of "Bad Grandpa" by 43 years.

The closing credit scenes of "Bad Grandpa" made me think of Funt's handiwork. I'm not a big fan of practical jokes, but I watched "Candid Camera" every week in the hopes that someone would punch Allen Funt in the face. It never happened, and "Bad Grandpa"'s post-credits outtakes told me why. When Johnny Knoxville and his partners in crime reveal their true intentions to people at strip clubs, diners, funeral parlors, convenience stores and beauty pageants, everyone is good-humored about it because they know they'll be in the movie. Fifteen minutes of fame is worth a lot more than a few seconds of hot-headed retaliation, no matter how embarrassing those 15 minutes may be.

Unlike the "Jackass" TV show or its resulting movies, "Bad Grandpa" combines Knoxville's penchant for crazy stunts with a scripted story about a dirty old man and his precocious kid. Knoxville plays Irving Zisman, the randy 86-year old grandfather of Billy (Jackson Nicholl). Irving's wife of 46 years has died, and as "Bad Grandpa" opens, he reacts with a laugh and proclamation of freedom. But at the funeral of Mrs. Zisman, Billy's Mom pawns him off on his granddad. The kid will cramp Irving's lothario style ("I may be too old to stir the gravy," he tells one woman, "but I can still lick the spoon."), so a standard issue movie road trip develops. Zisman will bring Billy to his father, then resume his quest to find the next "piece of tail."

"Bad Grandpa" follows in the footsteps of Sacha Baron Cohen's plot-driven interactions with the common man and woman, people who are completely oblivious that they're in a movie. While not as good as "Borat," 'Bad Grandpa" is more committed to developing the relationships between its actors. At its core is the realistic interplay between Billy and Irving. Knoxville immerses himself in the role, radiating affection and concern for his charge. He's completely convincing, even during the most bizarre moments in "Bad Grandpa." There's such a mischievous spark in his eyes as he seamlessly perpetrates the Jackass-style stunts that even when they didn't work, I felt more forgiving than I should have.

While the gross-out jokes and stunts will put people in seats, the real reason you should see "Bad Grandpa" is Jackson Nicholl. With roles in "The Fighter," the "Arthur" reboot and "Fun Size," Nicholl isn't a newcomer, but this is the first time I noticed his talent. He plays off Knoxville quite well, upstaging him at several points. Nicholl is even good enough to make you forget that this film's climactic prank is a direct lift from "Little Miss Sunshine." He singlehandedly, and hilariously, ruins Warrant's "Cherry Pie."

In the few moments where he's left to prank people on his own, "Bad Grandpa" doesn't treat him like the clichéd potty mouthed kid out for shock value. Instead, he uses his childlike innocence to make the adults more uncomfortable than his grandpa's raunchier shenanigans ever could.

Speaking of raunch, "Bad Grandpa" has plenty of it, both in its framework story and the stunts perpetrated within. Despite the trailer and commercials giving away practically every setup and/or payoff, I've tried to avoid saying too much about the money shots. I'd say they succeed about 65-70% of the time, and that, coupled with the performances of the two leads, push this up to recommended status.

I need to describe one joke to make a point, so stop reading here if you're spoiler averse.

The R-rated "Bad Grandpa" is just the latest example of the amusing ratings mathematics of the MPAA. Ten minutes in, an uber-horny Irving Zisman decides to sexually penetrate a soda machine. This results in numerous shots of his junk stuck in the machine. People around him respond with minimal surprise, taking pictures and video with their iPhones as he tries to free himself. It's obviously a fake penis in the footage, but I couldn't help but think that if the film had shown Irving Zisman plugging that thing in a more appropriate interface, "Bad Grandpa" would be rated NC-17. It would also have made for a funnier joke when he got stuck. 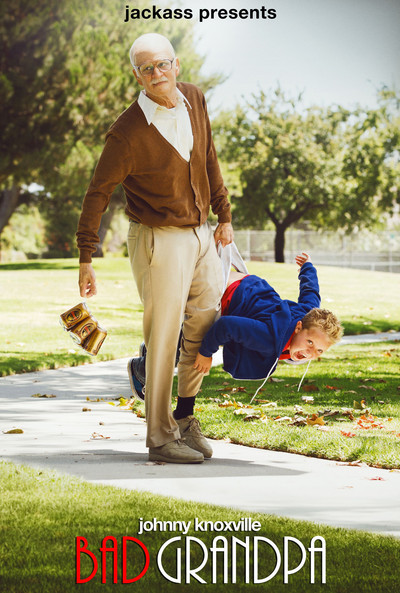 Bam Margera as Himself

Chris Pontius as Himself

Preston Lacy as Himself

Dave England as Himself

Ehren McGhehey as Himself