Jack Reacher (Tom Cruise) isn’t a talky fellow. He’s a loner with no middle name and no fixed address. He lives in fleabag motels, gets around by hitchhiking, and tends to communicate with his fists, though only after repeated warnings have failed. He is not, to put it mildly, father or husband material.

So of course “Jack Reacher: Never Go Back,” based on Lee Child’s novel, has the bright idea of outfitting Jack with a makeshift nuclear family consisting of a female Army major, Susan Turner (Cobie Smulders), who’s had a bloody conspiracy wrongly pinned on her, and a teenage girl named Samantha Dayton (Danika Yarosh), who might or might not be Jack’s daughter by a previous dalliance. This is the kind of setup that Clint Eastwood might’ve handled with aplomb back in the day—in fact, Eastwood’s early masterpiece “The Outlaw Josey Wales,” tells a thematically similar story about a loner who acquires a "family"—and although Cruise is diminutive compared to Eastwood, he does a credible version of Clint’s squint and hair-trigger lethality. His performance tries to delve deeper than the film will allow. We get a sense, more from watching Cruise than from any of the forgettable dialogue the character’s been given, that Jack inflicts violence because it’s the only thing he’s really good at; that it may in fact be his only form of cowardice—a means of running away from adult responsibilities—and that he has no idea what to say to a romantic partner or a child during quiet moments.

It’s a pity that “Jack Reacher: Never Go Back” fails to support Cruise and his co-stars, all of whom are acting as if their lives depended on it. There’s a great movie buried somewhere in here—a strange but beguiling family comedy and a meditation on nature vs. nurture, with a bit of shooting and punching thrown in—but the filmmakers never figure out how to excavate it. There’s a touch of 1980s Hong Kong action cinema in the way that director Edward Zwick and his co-writer Marshall Herskovitz (rewriting Richard Wenk’s script) juxtapose bone-breaking fisticuffs with deadpan-goofy scenes where Jack and Susan—who’s basically a female Jack, with the same anger-flexing jawline—struggle to protect and half-assedly parent Samantha as the trio runs from city to city, fending off assassins and trying to clear Susan’s name. But Zwick doesn’t have the Hong Kong wildness required to pull off that kind of film. He’s an intelligent director, but too earnest and careful for material like this.

There are a handful of genuinely funny moments in which Jack, Susan and Samantha—a street-tough kid whose mom was a prostitute and drug addict—fall into the familiar “Father Knows Best” patterns even though they’re holed up in a New Orleans hotel while trying to get to the bottom of an Afghanistan-based arms smuggling operation run by a Halliburton-type military contractor. None of them have experience behaving within a traditional mother-father-child configuration, so they’re a bit like actors who’ve been thrown into a play without benefit of having read the script and are forced to improvise, badly. Susan and Samantha’s version of mother-daughter bonding includes a tutorial on how to wrench a gun from a man’s hands and kick him in the testicles. When Samantha sneaks out without permission one night, Jack and Susan confront her when she returns, and Jack half-sputters, “Where were you?”

The sight of two skull-cracking soldiers failing to control a teenage girl is a good joke, and remarkably, it never gets old. Unfortunately, it never becomes something other than a joke, or an undeveloped notion. The movie is filled with undeveloped notions, as well as scenes that might’ve been dazzling, or at least clever, if Zwick and Herskovitz had been able to settle on a tone and a vision and develop them. Instead they march along with mild enthusiasm but no gusto, alternating dry-but-not-dry-enough comedy with action scenes that are competently executed but nowhere near as inventive and stirringly perverse as the best stuff in the original “Jack Reacher,” a likewise pretty-good military conspiracy thriller enlivened by Cruise’s junkyard dog sourness, a campy villain performance by Werner Herzog (who has no equivalent here, alas), and a couple of brilliantly staged, close-quarters fights.

Zwick (who has told many military-themed stories, including “Courage Under Fire” and “Glory”) and Herskovitz (who teamed with Zwick on a series of great domestic dramas for TV, the best of which was “My So-Called Life”) can’t seem to decide if they want to lightly parody the subgenre of “burned-out killer rejuvenated by love” or embrace it without apology, even if it means alienating fanboys who are uncomfortable with any display of emotion that doesn’t involve Cap and Bucky. This confusion manifests itself in the film’s penultimate scene, a fated goodbye between Jack and Samantha that might’ve been heartbreaking had the filmmakers ended it thirty seconds earlier.

Cruise does some of his career-best acting in this scene; you can see Jack struggling to make his face and voice do what any natural father’s would do automatically, and failing miserably, because he’s either not wired that way or lacks the life experience required to fake it. There are moments where Cruise’s work here evokes Kurt Russell in “Soldier,” which is one of the best lead performances I’ve seen in a movie that was just barely OK. There’s fine supporting work by Aldis Hodge as a military police officer, Holt McCallany as an officer who’s up to no good, and Patrick Heusinger as an assassin who’s known only as The Hunter, and whose black trenchcoats and hipster facial hair suggest a Eurotrash cousin of Ryan Gosling. Smulders has a number of strong moments, too—and she drives home the idea of Susan as a female Jack by delivering stinging rebukes in a very Cruise-y “A Few Good Men” cadence—but she, too, is left to wander between the winds. There is nothing terrible about this film, yet it fails everyone involved with it. That’s the kind of magic trick that you don’t want to see. 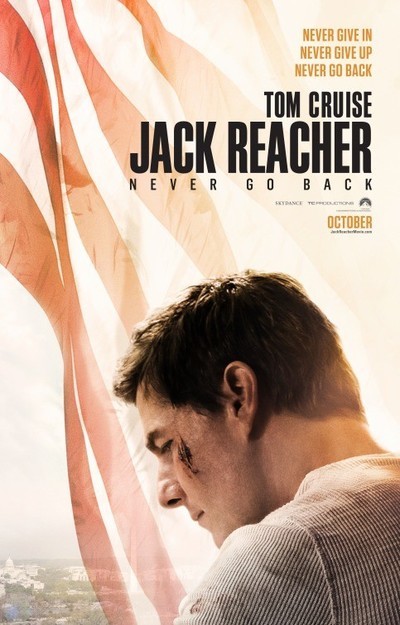 Rated PG-13 for sequences of violence and action, some bloody images, language and thematic elements

Patrick Heusinger as The Hunter