Loss of innocence is surely one of the fabled "seven stories" that get told over and over again, and with good reason: everyone goes through it and can relate. Eliza Hittman's debut feature, "It Felt Like Love", is an unsettling female-centered take on the experience. Gina Piersanti plays Lila, a virginal Brooklyn teenager who spends a lot of time in the company of her best friend, Chiara (Giovanna Salimeni), who has some experience but carries herself as if she's had a lot.

Lila is simultaneously fascinated and terrified by the prospect of having sex for the first time. As it happens, Chiara knows a boy who'll have sex with anyone, or maybe anything: Sammy (Ronen Rubinstein), a college student who's a little bit more sensitive than a lot of the sinewy dudebros he runs with, but only a little bit. There's not too much plot beyond this simple goal, and while it takes Lila a while to achieve it, journey, destination, etc.

The journey isn't pretty. Hittman and her cinematographer Sean Porter shoot probably four-fifths of the movie in a very shallow plane of focus. This blurs most of the frame and directs our attention to the heroine's crisply outlined face or skinny body, to the back of her head as she observes Chiara's flirtations and hookups, or to the preening of Sammy and his testosterone-addled pals, including Patrick (Jesse Cordasco), Chiara's boyfriend. This visual technique will thrill some viewers and irritate others, but it's effective at conveying the self-centeredness and myopia of the teenage point-of-view. This movie is about Lila, but it's also about the adolescent's belief that everything is about them.

This dovetails with the movie's grasp of 21st century young urban manhood, which is reductive and unpleasant but feels true, at least from the heroine's perspective. Sammy, Patrick, and pretty much every other boy in this movie are only a couple of steps removed from being mouth-breathing thugs. They crave release: the adrenaline release of video games and horseplay, but also other kinds. Their fear and loathing of women is palpable. Several scenes in which Lila hangs out with Sammy and his buddies in a man-cave are mortifying. She is clearly an interloper, and they treat her like one, and somehow their snickering indifference and dimwit innuendo are part of the male-female dance in this world. Lila's closed-off expressions suggest that she if not welcomes, at least expects to be treated with contempt. These rec room scenes rank with the most pessimistic depictions of teen sexuality in recent cinema.

Yet however heartfelt and keenly observed this pessimism is, it becomes monotonous. Hittman's screenwriting has been favorably compared to Catherine Breillat ("Fat Girl", "A Real Young Girl") and Lynne Ramsay ("Ratcatcher," "Movern Callar"). But its single-minded bleakness sometimes reminded me more of Larry Clark ("Kids", "Ken Park") and Harmony Korine (who scripted both those films). Clark and Korine's work, whatever their other virtues, often seem to take place in a universe of users and abusers that's devoid of real love, indeed any possibility of anything but a fleeting connection.

With few exceptions, that's the dominant mode here, too. Piersanti gives an affecting blank-slate performance. But that's all she is here. The director treats her almost as a living sculpture, a foreground object mediating between the hormonally supercharged world and the camera's eye (which roves over men's bodies the way most films rove over women's). Through the heroine's eyes, every motivation is primal: lust, fear, the desire for acceptance. The girls loathe themselves. The boys have been so emptied out by masculine codes that they exploit that loathing. Every sexually charged conversation, or potential sexual encounter, seems to teeter on the edge of rape. The restricted visuals, the super-tight close-ups that break the actors' bodies into cubist chunks of limb, torso and face, and the wobbly, roving camerawork, all combine, enveloping the movie like a tarp. "It Felt Like Love" doesn't just unreel before your eyes, it weighs on you.

This is a tremendously accomplished film. Its objectives are clear, and they are achieved with precision. The actors, a couple of whom are professional dancers, act with their bodies and their eyes. The parties, the anxious breakfast table exchanges between the heroine and her father (Kevin Anthony Ryan) and her young neighbor, Nate (Case Prime), have a documentary-like, at times anthropological feel. But is it churlish to ask for a bit more than anxiety, shame, disgust, and in the end, degradation? If this were a short film, or even a featurette, I wouldn't ask such questions. But it feels as though we travel quite a long psychological road trip to arrive at the film's final destination: a closeup of the heroine staring right at us, as if daring us to make what happened to her make sense.

I don't like to use one movie as a club with which to beat another, but I want to steer viewers towards another female coming-of-age story, the 2012 Chilean film "Young and Wild", by Marialy Rivas, which covered similar terrain in a much richer, less schematic way. The heroine of that movie, Daniela, was a teenager blogging about her sexual experiences, and the story was fascinating in large part because there is obviously a big gap between the blasé, wise-beyond-her-years façade that she presented to the world on her sex blog and the young woman that we actually saw on screen. As she navigated her own hormone-fogged environment, in shallow focus close-ups similar to those in Hittman's film, we felt Gabriela's ache to become experienced, and the anxiety of getting in over her head. But the movie was also funny, and the sex was presented as complicated, sometimes fraught with psychological issues. The characters made each other laugh. They had fun. The movie wasn't a dirge. And we got the sense of a world beyond the one the heroine saw and described—that the "truth" about men, women and sex could be found somewhere between her need to impose a neat narrative on her experience, and the world's tendency to thwart that impulse. 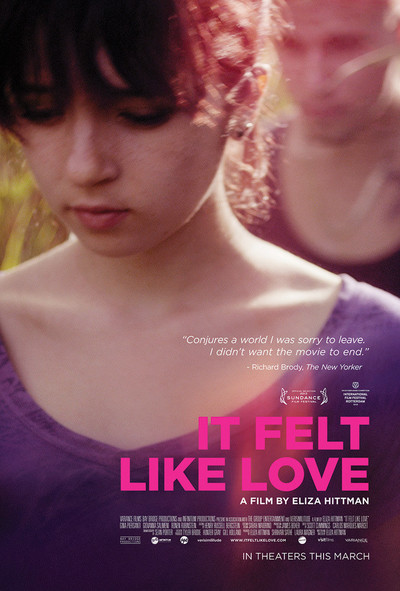