“Isn’t It Romantic” tries to have its red velvet cupcake and eat it too, and though it’s tasty and enjoyable while you’re watching it, you’ll realize how hungry you are for something heartier soon after you’ve come down from your sugar high.

It's as high a high concept as you can imagine: A woman who hates romantic comedies finds herself stuck inside one. You could give the entire elevator pitch in the time it takes to press the button for the floor you want. But the brassy Aussie Rebel Wilson, consistently charming and game as always for everything that comes her way, finds subtlety and sweetness within this broad premise with her trademark sly, deadpan delivery. She’s raunchy but tender and easy to root for—so much so, that you’ll wish “Isn’t It Romantic” had taken even more chances and allowed her the opportunity to do the same.

The film from director Todd Strauss-Schulson (“A Very Harold & Kumar Christmas”) and screenwriters Erin Cardillo and Dana Fox & Katie Silberman places Wilson at the center of a tricky balancing act. “Isn’t It Romantic” simultaneously ridicules and embraces the many, many clichés of the rom-com genre. It knows these movies are pure formula, and it makes fun of that formula in myriad and amusing ways, including overt references to such predecessors as “Pretty Woman,” “Notting Hill” and “13 Going on 30.” But by the end, it’s also pretty much delivered that exact same formula with sincere enthusiasm, which makes the whole exercise feel like a bit of pointless wheel-spinning.

It’s a tough feat to pull off, regardless of the genre. Edgar Wright managed it beautifully with his Three Flavours Cornetto trilogy of “Shaun of the Dead,” “Hot Fuzz” and “The World’s End.” “Isn’t It Romantic” mostly coasts on Wilson’s likability and the power of recognition: a particularly overused song, some hackneyed character traits, a well-worn narrative device or a tidy way of wrapping things up to achieve a happy ending, etc. But every once in a while, it has something to say about what’s problematic about these familiar film tropes. Why must the heroine always have a flamboyantly gay BFF, and why does he have no life of his own outside of hers? Why must she have a female office rival who hates her for no apparent reason, when they should be working together to topple the patriarchy?

Some food for thought here and there, but “Isn’t It Romantic” mostly serves pleasing, bite-sized nibbles.

Wilson gives it her all, though, as Natalie, a young, single woman living in a dingy New York apartment and working as an architect at a firm where no one appreciates her. That is, except for her work pal Josh (Wilson’s playful “Pitch Perfect” co-star Adam Devine), who clearly has a crush on her while dwelling in the friend zone. One day on the way home from work, she gets mugged on a subway platform, bonks her head and wakes up in the hospital. Suddenly, the world around her has transformed. It’s a wonderland of flattering lighting and flirty doctors. Flowers and cupcakes are everywhere. The bustling NYC streets smell like lavender and the tinkling piano of Vanessa Carlton’s catchy “A Thousand Miles” follows her wherever she goes. Her surly neighbor from across the hall is now a stereotypically wisecracking gay man who loves makeover montages (Brandon Scott Jones, who gets plenty of zingers). And in one of the sharpest insights, Natalie now lives in an impossibly spacious, chic apartment with insane amounts of closet space for her vast shoe collection—the kind of real estate very few people could realistically afford.

Yes, she now lives in the very kind of romantic comedy she’s long despised. (And yes, for those of you keeping score at home, that’s two movies in as many weeks in which our heroine suffers a head injury and wakes up to a different life, between this and “What Men Want.”)

Natalie’s task is to figure out what life lesson she must learn in order to return to her regular life. But she still takes time to enjoy the fantasy, including a whirlwind romance with a wealthy, hunky real estate developer (an earnest and goofy Liam Hemsworth) that includes a candlelight dinner on his yacht and a helicopter trip to the Hamptons. (Their dramatic first kiss in the rain—in the middle of the street where the Empire State Building and the Chrysler Building appear to be only about a block away from each other—is good for a chuckle.) Meanwhile, Josh gets to enjoy his own out-of-this-world love affair with Priyanka Chopra’s impossibly gorgeous and glamorous swimsuit model/yoga ambassador—the kind of passionate relationship that naturally opens Natalie’s eyes to what she’d been missing all along.

Of course, it all concludes with a mad dash to make some last-minute, very public proclamations of love, followed by a second dance number when the first exuberant one alone would have been just fine. By the end, it all feels like overkill, and the movie barely lasts 90 minutes (and couldn’t have sustained its central gimmick much longer). But your face will hurt from smiling so hard—and you may even have a toothache afterward. 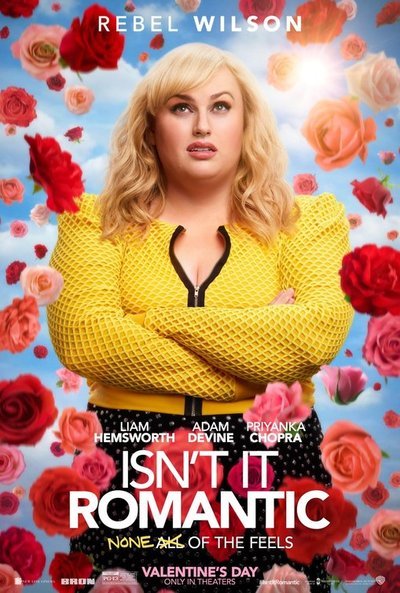 Rated PG-13 for language, some sexual material, and a brief drug reference.