“IO” has some good and bad news about the Earth. The good news is that all of those in-depth news reports about Earth soon becoming uninhabitable were indeed not wrong. The very bad news is that Mother Nature finally brought out the Raid can on human kind and sent us fleeing the planet to a floating colony outside of Jupiter’s moon, IO. There, humans seek to find a new way to live, rationalizing that our trashing of the Earth was simply inevitable.

Such is the setting for Jonathan Helpert's “IO,” which tells of a young woman back on Earth named Sam (Margaret Qualley). She has not lost hope, using extensive science to see if there is a new way to live on a planet that forces her to walk around the city in an oxygen mask, and casts an eternal smog over the art museum she loves to steal away to. Back at her countryside lair, Sam sends messages back and forth with her lover Elon, who is on the colony and begs her to take one of the few shuttles out of Earth left, which would mean that Sam was accepting that that Earth can no longer sustain human life. In various moody passages, which effectively establish the scope of her isolation and the specific world she's made for herself, we see the life she has sustained, while surrounded by her scientific equations and notebooks. Through a fair share of voiceover, Sam speaks in detail about her progress with different elements and lifeforms, and “IO” loads up on its science jargon as if trying to weed out any Netflix viewers who don’t desire gardening, beekeeping, and Nowak’s evolvability equation to be the primary weapons for a hero’s fight for survival.

Anthony Mackie, playing a man named Micah, arrives on a hot air balloon about 25 minutes into the film. He wants to meet her famous scientist father (Danny Huston), whose voice we hear whenever she plays his tapes as a type of soothing mechanism, or protocol. Feeling less like his own mysterious being than a screenwriting tool, Micah helps hammer home what Sam’s father told her—“Don’t underestimate the power of human connection"—and talks whimsically about the time of "Before." Nonetheless, his arrival comes with suspicious timing: the last Exodus shuttle off of Earth is leaving within a few days, and soon enough he shares that he wants to take her on his balloon with him to the shuttle launch site, at any cost. But she doesn't tell him the truth about her father and he doesn't tell her why he actually is here.

In the passages that follow, “IO” does not grow a remotely compelling story out of the dry seriousness it started with. And as capable as the film’s duo might be, they cannot make their characters’ elusive backstories curious or their pensive gazes magnetic. Qualley and Mackie struggle to find chemistry as two slightly less lonely people in the world, conversing with monotone line-readings while guarding their private denials. They most of all help the movie supplant the notion of having its own interesting ideas by reciting the likes of Yeats, Eliot, and Plato.

However pure its intentions, “IO” is genre minimalism to a fault. It rhetorically asks questions like, “What if the only immediate narrative tension involved getting two people to a launch site?”, “What if these two characters always have secrets from each other?”, and more specifically, “What would it look like if a dystopian film was based on science, and had someone cryptically quoting Yeats through their oxygen mask?” Broad themes like staunch hope, and vital human connection, become cheap sentiments, vanishing into air. “IO” isn’t science fiction storytelling distilled so much as it is vaporized. 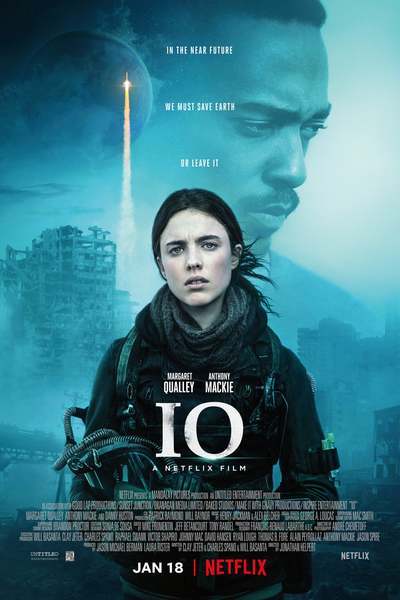