Over the years, I have found that quiet post-apocalyptic scenarios, which focus more on characters trying to survive in their new circumstances, are usually more interesting than those interested in hardware and spectacle. I'm thinking about films like “Testament” (1983), a powerful drama in which Jane Alexander played a suburban mom trying to keep her family together in the wake of a nuclear attack; “Miracle Mile” (1988), a wonderful thriller about a man who inadvertently receives a phone call claiming that a nuclear war has been launched and his city will be hit in just over an hour; and “Seeking a Friend for the End of the World” (2012), a quirky and sadly underrated comedy-drama about people dealing with love and loss in the last few days before an asteroid hits Earth and destroys all life. The similarly low-key Canadian import “Into the Forest” may not quite hit the heights of those examples, but this story of a pair of mismatched sisters forced to face the unthinkable is, at least for most of its running time, a strong, smart and moving end-of-the-world drama that is further bolstered by strong performances from co-stars Ellen Page and Evan Rachel Wood.

Based on a novel by Jean Hegland and set in the not-too-distant future, the film introduces us to Nell (Page) and Eva (Wood), two sisters living in a house hidden away in the woods of Northern California with their recently widowed father (Callum Keith Rennie). Although the distance from the nearest town inspires them to keep plenty of provisions on hand, the sisters are hardly the survivalist type—Nell is online all the time studying for her exams while Eva is relentlessly preparing for an upcoming dance recital. All of that changes one day when the power mysteriously goes out. At first, this seems to be just a minor annoyance, but not only does it never come back on, there is talk that the entire country—possibly even the world—is still in the dark. Although the loss of power puts a crimp in their immediate plans, Nell and Eva are in a slightly better position than others in the area—as we realize during a creepy visit to the nearby town for what provisions still remain—thanks to the resourcefulness of their father. When that lifeline is soon cruelly cut off, the two are forced to face an uncertain future in which they have to figure out how to survive on their own. They face dangers ranging from starvation to illness to inhumanity within other people.

“Into the Forest” was written and directed by Canadian filmmaker Patricia Rozema, whose previous efforts have included the charming comedy-drama “I’ve Heard the Mermaids Singing” and a very good adaptation of Jane Austen’s “Mansfield Park.” Instead of framing the story as an us-against-them narrative with the sisters coming together to fight off the outside dangers, Rozema is more interested in watching two people who have little in common beyond shared genetic material trying to coexist at a time when even the smallest and most seemingly innocuous things—a visit from Nell’s boyfriend (Max Minghella), watching a home movie with a generator that uses precious gasoline or a hoarded piece of candy—can have serious consequences. Instead of making Nell and Eva into instant saints, she allows them to have the moments of anger, prickliness and selfishness that any of us would most likely succumb to given the circumstances. While all of this is going on, she also creates a quiet but palpable sense of menace regarding the world outside the house, where even the slightest odd noise can be the harbinger of some potential horror from which they cannot easily escape.

Adding to the power of the story are the performances from Page and Wood. At first glance, the casting might seem to be a bit questionable—both actresses are clearly a few crucial years older than the characters they're playing and they don’t exactly look much like sisters, either. And yet, while they may not resemble siblings that much, that aspect is quickly forgotten because of how deftly they create the idea of long-standing family ties—the kind that occasionally choke as well as bind, and find themselves being both tested and strengthened under extreme circumstances. At first, the two are clearly playing to their strengths—Page is the more outwardly strong and pragmatic Nell while Wood is the dreamier and more ethereal Eva—but as the story progresses and circumstances change, they find new dimensions to the characters as well. Page brings an unexpected vulnerability to Nell without sacrificing her basic strength while Wood, in the best role she has had in quite a while, gives Eva the kind of nerve and determination one would hardly expect her to possess based on our initial glimpses of her. Callum Keith Rennie and Max Minghella are also good in their smaller roles, and there is another memorable supporting turn from Michael Eklund as a local who figures in the film’s most harrowing moment, one that Rozema thankfully does not milk for cheap thrills or empty heroics.

The one major problem with “Into the Forest,” the one that keeps it from making that final leap of good movie to a potentially great one, is that the final third is just not quite as strong as the stuff that precedes it. Rozema doesn’t seem to have as sturdy of a grip on this section, and while the ingredients are certainly there for a satisfying conclusion, they just don’t quite come together in an entirely satisfying manner. (Of course, one could argue that by giving viewers an uncertain conclusion, Rozema is attempting to put viewers in the footsteps of her protagonists.) That problem aside, “Into the Forest” is an undeniably interesting, oftentimes affecting and, yes, unapologetically feminist take on the post-apocalyptic narrative. Unfortunately, by coming out in the middle of the summer opposite blockbuster banalities like “Jason Bourne,” there is a good chance it will come and go from theaters. But find a way to see "Into the Forest," for it is the kind of film that will not only stick with you, it will even make you think. 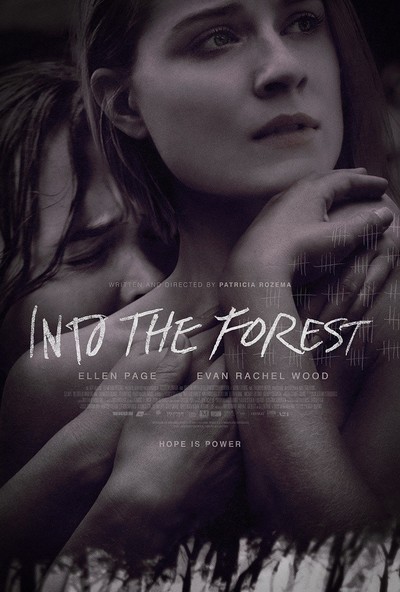 Rated R for a scene of violence involving rape, language and some sexuality/nudity.