Into the Dark: Pooka!

“Timecrimes” and “Colossal” director Nacho Vigalondo does not care about the traditional rules of genre, and he’s incredibly willing to push back against audience expectations. A lot of filmmakers would have thrown up their hands at the very concept of “Colossal,” but he dives into the deep end. Now, that doesn’t mean all of his risk-taking pays off—it’s inherent in the very idea that some risks don’t turn into quality art. But it would be nice to see more filmmakers and studios willing to embrace the risky projects that seem to draw Vigalondo.

Which brings us to “Into the Dark: Pooka!,” the third installment in Hulu and Blumhouse’s monthly series of holiday-themed horror films. The first two, “The Body” and “Flesh & Blood” were mediocre-to-bad. The first had the kind of idea that worked better as a short film, and I’ll be honest that I completely wiped the second from my mind. I know November was a very long month for most of the world, but it’s a problem when your film is that forgettable. I certainly won’t forget “Pooka!,” easily the best of this series to date, even if all the aforementioned risks don’t bring holiday Christmas cheer.

An out-of-work actor named Wilson (Nyasha Hatendi) goes to an audition, practicing his monologue from “A Christmas Carol” on the way there. He doesn’t know it yet, but the audition is actually for the giant version of the Pooka. He’ll be the guy in the suit at the one store that sells the toy, repeating what kids say and doing the creepy Pooka dance. Of course, Wilson gets the job, and his success gives him the confidence to talk to a pretty realtor he sees at a Christmas tree lot. Or does he? “Pooka!” starts off a little creepy and weird, and then Vigalondo and his team slowly turn up that aspect of the film, forcing to question if anything we’re watching is even real.

At first, it seems like “Pooka!” may just be another “Dr. Jekyll and Mr. Hyde” tale as the costumed version of the character appears to get more and more malevolent. Is Wilson letting out his dark side behind the mask? Then it looks like the Pooka may be an entirely different creature, existing alongside Wilson. And then, well, the holiday theme comes into play as “Pooka!” riffs on “Christmas Carol” in more than just audition monologue form. It’s a structurally crazy piece of screenwriting by Gerald Olson that somehow melds Dickens with Vigalondo’s out-there style, throwing in just enough blood and guts to keep the Blumhouse brand strong.

While I admire its ambition, “Pooka!” kind of wears out its welcome before it’s over. It’s been the problem with every “Into the Dark” so far, a series that has made me miss Showtime’s “Masters of Horror” more with each passing episode. That fantastic series forced filmmakers to stick to 60-minute run times and the results were tense and taut. All three of the “Into the Dark” films so far feel like the opposite—60-minute ideas stretched to 80-plus. And the worst thing you can do to a genre that relies so heavily on tension is to stretch it out.

Still, there’s artistry at work in “Pooka!” that was lacking in the first two films, and the series is heading in the right direction, earning a half-star more from me with each release. At this rate, they’ll be making masterpieces by Easter. 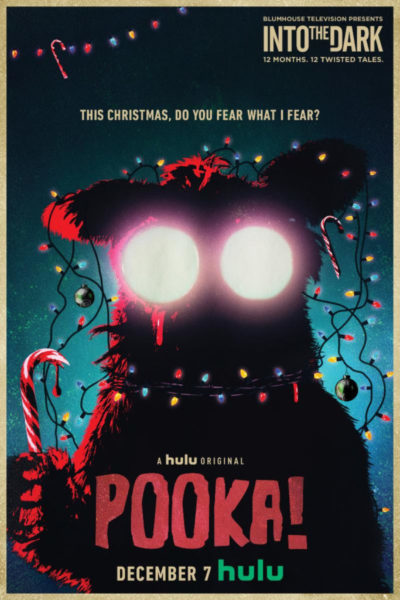