I steeled myself while anticipating the harrowing moment that was hinted at in the trailer.

As Tris, the free-thinking fugitive hero of the clumsily titled “The Divergent Series: Insurgent,” Shailene Woodley picks up what looks like a pair of gardening shears and manages to somehow transform her lengthy locks into a chic pixie cut worthy of Vidal Sassoon. No mirror or comb needed apparently.

Of all the misleading tropes in the history of cinema, chopping off one’s own hair without having it look as if Freddy Krueger was your stylist probably gets on my nerves more than most. That means you, too, Amazing Amy in “Gone Girl.” Yes, I know it is a metaphor for change, new beginnings and all that, but such an irresponsible act of DIY should not be encouraged.

However, I can fully relate to the reason behind Tris wanting to simplify her beauty regimen, especially since she spends so much of her time on the run in this sequel to last year’s “Divergent.” As she explains her new ‘do to boyfriend and protector Four (Theo James, whose maturity and manliness nicely offsets the plot’s more ridiculous turns), “I wanted something different.”

I wanted something different, too. Instead, “Insurgent” now and then falls into the same trap as most scripts based on the middle book of a trilogy. As the grimmer YA-literary cousin to “The Hunger Games” that also pits young people against each other in mortal combat, this dystopian fable set in a post-apocalyptic Chicago treads much of the same ground as the first film with a modest amount of new information and characters. There is still a lot of jumping on and off of trains, plenty of hand-to-hand combat, much gun violence, some dangling from heights, more than a few fatalities, lots of fancy-schmancy “Matrix”-like effects and a whole bunch of chatter about the unsettled state of the social order.

“The Hunger Games” with its TV reality-show showbiz trappings at least leavens its gruesome bloodsport elements with outlandish costumes, pageantry and valuable input from colorful supporting characters in the form of Stanley Tucci, Elizabeth Banks and Woody Harrelson. But humorous is not the “Divergent” franchise’s natural state. Any sort of relief from the deadly seriousness of what is at stake comes courtesy of the cheeky interjections provided by Miles Teller, whose opportunistic Peter shifts his allegiances back-and-forth so many times that it’s enough to give his character whiplash (minus the drums).

That “Insurgent” and its predecessor prove to be at least halfway decent diversions is primarily thanks to leading lady Woodley’s ability to fully commit to her character’s internal journey as she eventually evolves into a self-sacrificing savior figure after being riddled with guilt and grief while summoning the sympathies of the audience. If Woodley is anything, besides being believably kick-ass, she is a world-class weeper (a skill she first displayed by wailing at the bottom of a pool as George Clooney’s daughter in “The Descendants”). Here, she nails both the single-tear trickle and full-out downpour splendidly.

The action once again takes place in a community that is divided into five factions defined by personality traits, with Abnegation left much depleted after an attempted genocide in the first outing. The now in-charge Erudite is once more led by the coolly cruel Jeanine (played by an over-qualified Kate Winslet), initially glimpsed as a giant image spewing propaganda like some sort of Big Sister. Meanwhile, Tris and Four—both faction-defying Divergents and therefore deemed dangerous—are joined by her seemingly timid Erudite brother Caleb (Ansel Elgort) and onetime Dauntless member Peter as they find refuge with the peace, love and outdoorsy Amity tribe, overseen by Octavia Spencer’s earth mama Johanna.

It seems that Jeanine needs to recruit a Divergent to unlock a mysterious golden box she snatched from Tris’ late mother (Ashley Judd, seen in flashbacks) so she unleashes her watchdogs to sniff them out. One chase scene later and they find themselves falling in with Factionless, a group of unaligned outliers whose queen bee is none other than Four’s mother, Evelyn, who faked her own death years before. She’s played by a brunette Naomi Watts, who leaves just enough of an impression to let us know she is not to be trusted. Eventually, Tris and Four reunite with their old Dauntless mates before the climatic faceoff inside Erudite headquarters.

Directed by action specialist Robert Schwentke (“Red,” “Flightplan”), “Insurgent” surges along with capable set pieces but less meaningful human interaction than in “Divergent.” But at least two sequences deserve applause. The first is when the Candor faction is finally introduced, with Daniel Dae Kim of TV’s “Lost” and “Hawaii Five-0” as their chief justice. One nice touch: The members are all dressed in black and white, since there is no gray area when honesty is involved, natch. The tension palpably builds when Tris and Four are put on trial and injected with truth serum, forcing them to answer some difficult questions and allowing the actors to actually act.

The other noteworthy scene arrives at the end when Tris has to undergo a series of five “sims”—hallucinatory simulations that test her ability to puzzle her way out of tight situations and test our ability to know what is real and what is fake onscreen. The most memorable is when Tris must engage in a struggle with herself, which ultimately allows her to achieve self-forgiveness.

In the end, the stage is set for Tris to lead the charge and save the world as the third book, “Allegiant,” is split into two films. Much like Woodley herself almost singlehandedly saves these films from being just another overwrought dystopian nightmare. 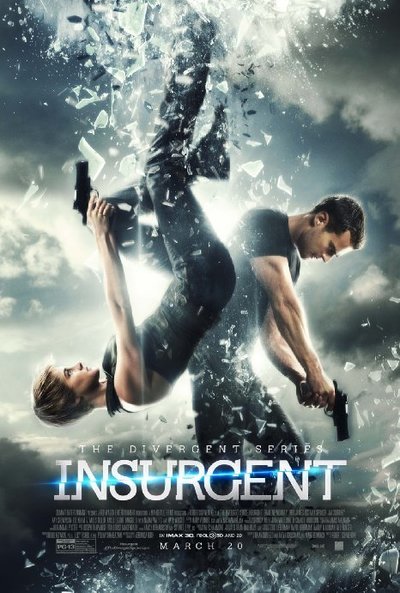 Shailene Woodley as Beatrice 'Tris' Prior