Hartnett plays Kip Conley, who lives in Appalachia, where he and his sister Josie (Margarita Levieva) are drug dealers, selling opioids to the residents of their small community. They also have a younger brother named Boots (Owen Teague) who has been kept out of the business so far, but who is eager to prove himself.

The film's first scene tells us what we are in for. Josie's customer, a woman who got hooked on painkillers after she was injured on the job, explains three times in two minutes that life does not always turn out the way you plan. Then, as if we might not fully understand this already-obvious point, she buys the pills and immediately overdoses in the bathroom of the local bar. Life may surprise you, but this movie will not, as the characters trudge through its predictable descent through corruption, betrayal, and most of the deadly sins.

Each of the siblings has a vulnerability that moves the story forward. Kip has a pregnant girlfriend, the kind-hearted Eve (Valorie Curry), who works at the local beauty salon. Josie takes increasingly risky and desperate steps to try to keep the business going and makes an enemy of someone who may be even more desperate. And Boots has a bad combination of impatience and inexperience. When Kip and Josie try to dissuade him from getting involved, he and a friend try to set up their own drug deal and it goes disastrously wrong.

One of Hartnett's strengths as an actor is his ability to convey an essential blankness, skillfully deployed under the direction of Anthony Jerjen in his first feature. Such an understated quality allows the audience to project a range of thoughts and emotions. It draws us into the story by making us lean in a little bit to see what Kip is capable of. We see—or think we see—an increasing understanding of Kip's calm and determination.

Kip is not easily rattled, even in the direst situations. Not signaling every reaction adds some suspense as we are not sure what he is thinking and whether he can find a way out. That works well with Kip as the center, between his impetuous younger brother and the sister who has given up on everything but her own ability to fix whatever goes wrong for as long as she can.

It is also a welcome contrast to the dialogue, which is painfully expository-heavy, clomping along like snow boots through the storyline. There are poorly written discussions of what makes a hero and who gets to decide who is a hero. Bruce Dern, as the owner of the bar, gets to tell a story about a snake to make a point about survival. Characters make threats, statements of grim resolve, and existential commentary about the lack of choices, even as choices are being made.

Other than the brief appearance of Josie's customer and a homeless veteran Kip takes pity on, there is little attempt to provide context for the opiod dependence, its origins or impact, which makes it more difficult to accept the idea that the siblings have no other options. There are glimpses of more intriguing stories and characters than the three siblings, including Josie's customer and her devastated husband, Kip's girlfriend, Dern's crusty bar owner, and especially the decent but compromised cop played by Dash Mihok. These bright spots just remind us of how much more is possible than this movie delivers. 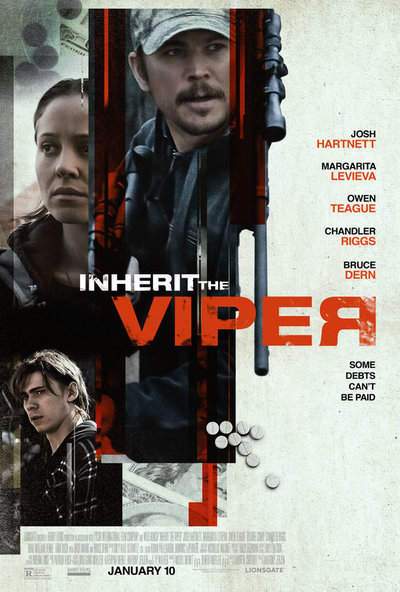