"In a World…" contemplates both the power of the male voice and the empowering of its female counterpart. Writer-director-star Lake Bell uses the world of voiceover to slyly explore how society has shaped our ears to accept stereotypical gender roles. She accomplishes this not by preaching, but by observing the personal relationships she has created for her actors. This is not just the story of a daughter challenging her father on the voiceover turf that made him a legend, it's also about how the use of conversation and voice craft our identities. The speaker has the floor, and whether you listen has a lot to do with what you are conditioned to hear. This is a very good movie and perfect summer counterprogramming.

Voiceover is an integral part of the sale when it comes to commercials, movie trailers and television show announcements, and the more memorable the better. But did you ever notice that most of these announcements are made by men? "In A World…" evokes this notion with its title, a phrase made famous by the late, great voiceover artist Don LaFontaine. His is a voice you don't forget, employed effectively over trailers for movies great and terrible. When I think of memorable voiceover announcers, my brain always retrieves LaFontaine, Don Cornelius, Ernie Anderson, and Adolph Caesar. Cornelius was the host of Soul Train. Caesar, the fine actor who played Old Mr. in "The Color Purple" and Sgt. Waters in "A Soldier's Story," was the Blaxploitation trailer's Don LaFontaine. And Anderson was the voice of the ABC of my childhood. I can still hear him imploring me to watch "The LUUUUUUUV Boat."

The question "In a World…" wants to consider is: Why didn't I immediately think of any women?

Bell presents the voiceover universe as a man's world. Sam Sotto (Fred Malamed) is this year's recipient of the lifetime achievement awards at the Golden Trailers. Under Sotto's wing is Gustav (Ken Marino), a rising voiceover talent to whom Sotto is passing the torch. Sotto sees Gustav as the son he never had, trading conquest stories as if this were a parody of "Mad Men." Bell's camera ogles both men in several steamroom scenes, making it abundantly clear that the elder is getting women based on the power of his voice. Sotto's latest trophy girlfriend Jamie (Alexandria Holden) is closer in age to his daughters Carol (Bell) and Dani (Michaela Watkins).

While Dani opts for the less cutthroat world of being a concierge, the underachieving Carol longs to follow in Dad's footsteps. As a dialogue coach specializing in accents, Carol has some voice talent, but Sotto constantly dissuades her. "Stick with the accents," he tells her, "voiceover is a man's world." Dani supports Carol with sisterly comfort, occasionally ignoring when Carol not-so-secretly follows the hotel's foreign clientele around while recording their accents. Neither of them has a good relationship with their famous dad. Sotto ignores anything his daughters say, talking over them whenever possible. When he does listen, his responses are condescending. To him, the male voice is always right, whether in conversation or to advertise the latest blockbuster.

So when the producers of a "Hunger Games"–like quadrilogy want to bring back LaFontaine's retired "In a world…" phrasing, Sotto grooms Gustav for the part. When his daughter, through hard work of her own, becomes the frontrunner for the gig, Sotto is so offended that he betrays his protégé and guns for the job himself. We've seen plenty of movies where fathers and sons compete; a father-daughter competition is a refreshing change of pace.

"In A World…" is too good a film to merely focus on this one plot element, or to present its male characters as one-note villains. These are complex people, funny one moment and infuriating the next. Carol is no better than her father at listening to those with something important to say. She's so used to being drowned out that her desire to be heard trumps all others. Her sound booth man Louis (Demetri Martin) is clearly infatuated, becoming tongue-tied whenever he talks to her. Carol bulldozes him in conversation, to the point where, in a wonderfully lensed back-and-forth, Louis unleashes a ridiculous bout of physicality to get her to pay attention to his words. This leads to a very sweet, quirky understated workplace romance between the two. Martin is very good here, embracing Louis' idiosyncrasies and polishing them to an irresistible character actor's glow.

Playing out in parallel to Carol's relationship and competition is a subplot involving Dani's marriage to Moe (Rob Corddry). Their relationship hits a snag when Dani proves what film advertisers believe: a sexy, forceful man's voice can be very convincing and persuasive. "In a World…" is most impressive when it weaves this thread into its fabric. It seems extraneous, but ultimately makes a major point about the power of words. Watkins gives a show-stopping, emotional speech that Bell gently elevates from both sides of the camera.

Bell is wise to temper her upbeat ending with a harsh note of reality provided by Geena Davis in a cameo role. She also benefits from casting the former voice of The NFL Today as her dad. Malamed has a great voice and the acting chops required to play Sotto with both swagger and repentance. As the lead, Bell has a warm, funny presence that carries us through the story. Despite accusing Jamie of being suckered in by her father's voice and reputation, Carol makes the same mistake with Gustav. After one of the most awkward seductions ever filmed, Bell acknowledges Carol's hypocrisy by having her say to Dani "guess who's a slutty whore?!!"

"In A World…" reminded me how unusual it is in Hollywood to have a woman perform triple threat duty on a film, which leads me back to my question of why no female announcers crossed my mind when I thought of voiceover work. Is this film, and marketing in general, correct about the perceived importance of a male voice? If so, why? Are both sexes conditioned to hear authority in male tones? Is it the deeper sound? If so, would someone like the brilliant contralto Cassandra Wilson be as effective over a trailer?

As I thought about this, I remembered the two places it was common to hear a female voiceover: Female products ads and political attack ads. The former makes sense—would you want James Earl Jones telling you about your period? The latter is far more sinister, with the nasty, snide, stereotypical cattiness of the voiceover overshadowing every spoken syllable. I wonder what Carol's voiceover could have done with Peyton Place Political ads. I smell a sequel. 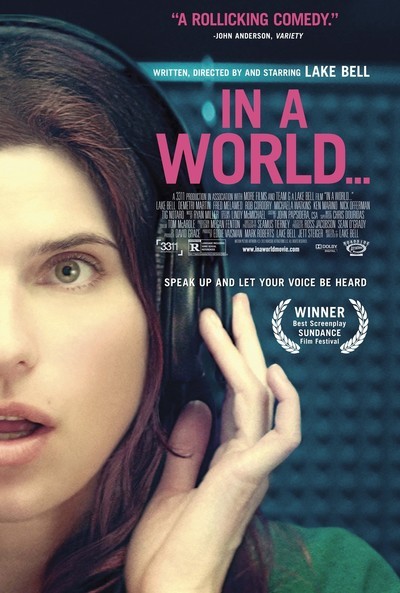