“Imperium” is a film that offers moviegoers the sight of Daniel Radcliffe as a young FBI agent who infiltrates a white supremacist organization, occasionally being forced to spew racist invective. As premises go, it's an undeniably odd one—cynics might even suggest that such eyebrow-raising casting could be a tactic to distract from a shaky screenplay. On the other hand, optimists might say the filmmakers wouldn’t have pursued this strange casting if it didn’t actually work in the long run. As it turns out, the cynics are right again as “Imperium” proves to be a depressingly familiar (when it isn’t just depressing) thriller and the casting of Radcliffe only contributes further to its failings.

When several barrels of a dangerous chemical go missing, the FBI, fearing a possible dirty bomb terrorist attack, begins to investigate, focusing most of its resources on pursuing the usual leads involving Muslims. However, agent Angela Zamparo (Toni Collette, who appears to be going through an entire pack of Nicorette in every single one of her scenes) is convinced they should really be targeting a white-power organization located in the Washington, D.C. area. Despite being pooh-poohed by her colleagues, Zamparo forges ahead and to get the goods on them, she recruits nerdy-but-eager FBI Agent Nate Foster (Radcliffe) to shave his head and go undercover as Nathan, an ex-Marine who has returned from Iraq with a plethora of grudges and some very specific ideas of who is responsible for them. Sure, he may not seem like the typical neo-Nazi at first glance but, with the exception of the occasional henchman whose suspicions are instantly rejected, he is welcomed into the shadowy world with surprising ease.

Nate’s search for information takes him on a tour of several different aspects of the modern white-power movement. The lowest rung of the pecking order is inhabited by the skinheads most eager to get messed up and instigate fights at the drop of the hat but who are far too reckless and undisciplined to be entrusted with anything important. A step up from them are the brownshirt types who are a little more organized than the skinheads but a glimpse of them at their compound in the woods makes them look more like overgrown kids at a decidedly sinister summer camp than anything else. Then there's Dallas Wolf (Tracy Letts, continuing his quest to be this summer’s Most Hated Supporting Indie Film Player following his turns in “Wiener-Dog” and “Indignation”), a secretive radio show host of the Alex Jones variety who has fired them up with his broadcasts and books such as “Genocide: The Murder of White America.” Finally there is Gerry (Sam Trammell), a well-off member of the organization who comes across as the most reasonable of a decidedly unreasonable lot—he and his picture-perfect family host barbecues to bring the various factions together, he's a vegetarian and not only does he listen to and wax ecstatic about classical music, he even admits that the recordings by Leonard Bernstein are his favorite. (“Jews listen to Wagner, don’t they?”). See if you can guess which of the above turns out to be the ultimate bad guy of the bunch—I suspect you will be pleasantly surprised.

“Imperium” will no doubt seem familiar to anyone who has ever seen more than a couple of thrillers involving cops going undercover in dangerous situations and trying to maintain their cover while bearing witness to any number of atrocities. Two that immediately leapt to mind were “Betrayed,” the ugly 1988 Costa-Gavras film with Debra Winger as an FBI agent who infiltrates a white supremacist community and inadvertently falls in love with one of them, and the recent “The Infiltrator,” in which Bryan Cranston played a government agent who attempted to bring down Pablo Escobar’s drug empire from within. The film sits somewhere in the middle of those—it lacks the truly distasteful mixture of soap-opera sloppiness and utter sadism that marred “Betrayal” but it also lacks the kind of strong central performance that could help overcome the other shortcomings in the way that Cranston’s work did for “The Infiltrator.” If you can think of a cliché that could be attributed to this particular sub-genre—ranging from the stuff at the seemingly idyllic barbecue where Mom passes around cupcakes with swastikas and adorable little kids talk about the upcoming race war to the moment where Nate is out in public with his new associates and an African-American acquaintance sees him to the moment where Nate has to think fast to save an interracial couple from being attacked without blowing his cover—it's here. And while I suppose such stuff is inevitable in a film like this, it's used so ham-handedly by writer/director Daniel Ragussis that they feel more like rituals to go through—the Stations of the Iron Cross, if you will—than moments of actual tension or suspense.

Another problem with the film, quite frankly, is the inevitably distracting presence of Daniel Radcliffe as Nate. From a performance standpoint, everything he does is fine and again shows his willingness to use the international fame he gained from his signature role to try new and adventurous things. (This summer alone, he has already appeared as a gassy corpse in “Swiss Army Man” and appeared in the gassy corpse that was “Now You See Me 2.”) However, his mere presence unfortunately brought up a couple of things that, fairly or not, I quickly found to be distracting. For one, while I don’t have a problem with him playing an FBI agent going undercover in the white power movement, a key part of his alter ego’s background is that he is supposed to be a hard and tough Marine capable of intimidating those around him, an aspect so wildly unconvincing that it winds up undermining more than a few scenes. My other problem is that I couldn’t help but wonder throughout if actual white power groups might take the scenes from the film in which he, as his alter ego, is railing against Jews and “mud people” and cut them into a video designed to bring younger children into the movement. (“Sure, Harry Potter hates Voldemort but do you want to know who he really hates?”) I assume that it was Radcliffe's casting that helped get this film financed in the first place, but I have a feeling that it might have been better off with an unknown in the role with no prior cinematic associations that might be distracting.

“Imperium” is not an exploitation films by any means and I am sure that everyone involved had the noblest of intentions to make a film that would lay bare an insidious subculture that continues to thrive. Great, but if you are going to do that, why not really make an effort to present a challenging story along those lines, instead of simply making what could have been an extended episode of any garden-variety police procedural series? Considering the inherent dramatic power of this particular narrative material, to see it wasted in such an unproductive and unedifying manner as with “Imperium” is kind of a bummer. 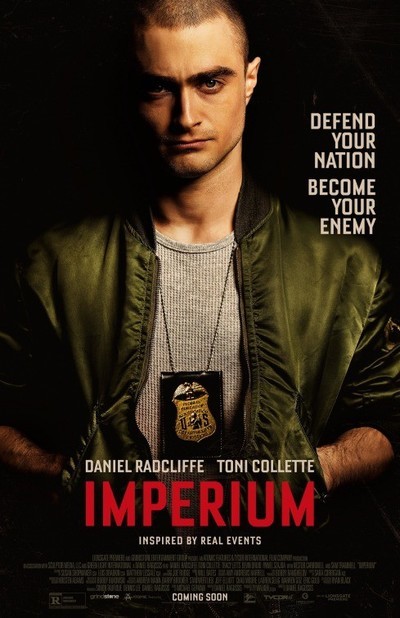