“Indignation,” the directing debut of the longtime independent film producer and executive James Schamus, is a movie so insistently out of step with contemporary American cinema as to be considered practically defiant. Adapted from a novel by Philip Roth (his 2008 book of the same name and his penultimate novel if we are to believe that he is now finally done with writing) “Indignation” is, like much of Roth’s late work, concerned with, or perhaps the better phrase is “consumed by” mortality and its inevitability.

Marcus Messner is a young man of great promise in Roth’s Newark, New Jersey—the author’s own Yoknapatawpha County, it turned out—first seen, or at least presumably first seen, attending the funeral of one of his high-school buddies, who’s been killed in the early years of the Korean War. The movie actually opens with a scene of single-soldier battle overseas, with framings that recall the work of Samuel Fuller. In any event, that conflict is one thing that Marcus needn’t worry about. The son of a butcher, Marcus has a scholarship to the Ohio college of Winesburg, and a draft deferment to match. Marcus is a devoted son and an exceptional student. He behaves well and holds himself to what he considers a high ethical standard. His only real issue, beyond his increasingly overprotective-to-the-point-of-frantic father, is his attachment to his intellectual independence, a pronounced disinclination to “go along to get along.” That and his rather understandable sexual naiveté. We are talking about 1951.

At Winesburg (the allusion to Sherwood Anderson is deliberate, as is the depiction of the place as an ideal place from which to leave), Marcus balks at joining a Jewish fraternity and fervently pursues his studies, but becomes enamored of a coed named Olivia (Sarah Gadon), a beguiling and brilliant young woman who chastises Marcus: “You are not a simple soul and you have no business being here.” She does not know how tragically right she turns out to be. And not just about Marcus. An episode of amorous generosity on Olivia’s part throws Marcus into a tizzy, and his inability to process it sets in motion a series of events that … well, as Marcus himself informs the viewer in voice-over narration early on, his own death will be the finish of them.

The title “Indignation” refers not only to Marcus’ state as he’s forced to justify himself to everyone around him, including a pious sophist dean of students (Tracy Letts), but also to the work’s own attitude. The novel’s measured prose carries a subtext of absolute rage at the arbitrary unfairness of fate. Schamus, who also wrote the screenplay to this film, is very concerned, or one might say consumed by, the idea of carrying this over to the screen. So he has constructed his film of Roth’s book in a style that is measured to the point of near solemnity. The movie moves very slowly. Much of its action—and the action largely consists of two, sometimes more, people engaging in impassioned and ever deepening conversation—is captured in long takes, carefully composed medium shots in which the actors are free to breathe and move but which still constrain them somewhat. A film scholar before he became a filmmaker, Schamus has written beautifully about the work of the Danish director Carl Theodor Dreyer, and his method here harks back to the stark plainness of a work like “Ordet” and sometimes even recalls the overt theatricality of the director’s last film “Gertrud.” Drawing superb performances from each and every one of his actors, Schamus meticulously makes every shot, and every gesture contained within that shot, count. Slowly, he accrues irony after irony in the details. The two Jewish upperclassmen Marcus first rooms with seem interesting enough fellows at first, with ideas of their own; eventually they are revealed as conventional hypocrites, and as one of them shows his true colors, the frame reveals, for the first time, a dinky little reproduction of Caspar David Friedrich’s “Wanderer above the Sea of Fog” the fellow has taped to the wall by his bunk.

Schamus’ commitment to a style, and to the material, yields potent results. The cast cannot be commended enough: Logan Lerman keeps a distinct and uncallow likeability even when Marcus is deliberately being insufferable. As Olivia, Sarah Gadon is spectacular, depicting a young woman who knows her own mind but can’t control it from taking her to terribly dark places. The playwright and actor Tracy Letts displays masterful control as the dean, a fellow who really is insufferable, through and through, but is also a man of his time, and for his time and for all that was awful of his time. As the movie draws to its inexorable conclusion, Schamus reveals one overt narrative trick he had up his sleeve the whole time, and if you’ve keyed in to the movie’s rhythms, it’s quite a devastating one. It brings home all the indignation of Roth’s work, and adds some fresh fuel to that fire. 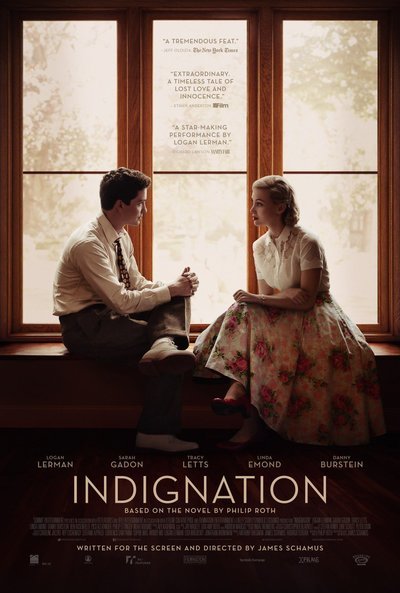