There will hardly be a single review of “The Infiltrator” that does not make reference to its Bryan Cranston irony—he became famous for playing the brains behind a powerful drug ring on “Breaking Bad," and now portrays a real-life federal agent who went undercover to bring down the narcotics empire of infamous kingpin Pablo Escobar. It is both an intriguing hook and an impressive performance, but not enough to overcome the familiarity of the material. Considering that this is a story of a man in a situation where even the most benign situations are fraught with intense peril bubbling just beneath the surface, it is a little disappointing that the film itself never quite demonstrates a similar degree of danger.

When we first see federal agent Robert Mazur (Cranston) in 1986, he is working undercover on a drug bust that almost goes sideways when the wire he is wearing begins to burn a hole in his chest. Although the injuries that he sustains from that excursion are enough to earn him an early retirement to spend with his wife, Evelyn (Juliet Aubrey), and their two kids, he still wants to stay on and eventually hits upon a genius move in the war on drugs. In the past, the cops and feds have been going after the drugs themselves, and while halting the shipment of a few hundred pounds of cocaine may look good for the cameras, the ugly reality is that there's much our there that anything seized can be replaced on the streets in no time at all. Mazur’s idea is to instead focus on going after the money itself, on the basis that if he can tap into how the dealers are laundering the insane amounts of cash being generated, he could possibly follow that trail all the way up to the kingpins like Escobar and use that information to build a case. To this end, he reinvents himself as Bob Musella, a seemingly upright businessman with the ability to launder hundreds of millions in drug money by funneling it into a labyrinth of business investments.

Sure enough, with his glad-handing manner and patina of success, Mazur/Musella is able to make contact with a couple of low-level members of Escobar’s infamous Medellin cartel and they are suitably impressed enough to help him work his way up through the ranks, eventually meeting and befriending trusted Escobar lieutenant Roberto Alcaino (Benjamin Bratt). As he quietly and methodically builds his case while playing the part of Musella to the hilt, Mazur is constantly aware that his performance has to be spot-on and that even the slightest slip can have unintended consequences. Early on in his infiltration, for example, Mazur, in an attempt to remain loyal to his real wife, begs off having sex with a stripper provided by one of his unsuspecting contacts by claiming that he has a fiancee to whom he wants to be faithful. Eventually, this hastily conceived ruse results in Mazur being given his own federally issued fiancée in Kathy Ertz (Diane Kruger), another undercover agent—on her first mission in the field, no less—whose life depends on his ability to convince others that he is something other than what he actually is. Even as Mazur gets closer and closer to the final big bust, there is still the possibility that everything could blow up in an instant—Escobar money manager Javier Ospina (Yul Vasquez), for one, doesn’t trust the newcomer from the first moment he sees him, and his skepticism hangs in the air like the blade of a guillotine.

The basic problem with “The Infiltrator” is that even though it is based on a true story, there is still nevertheless a been-there, done-that quality to a lot of the events depicted. Ellen Brown Furman’s screenplay too often plays like an amalgamation of “Scarface,” “Donnie Brasco,” “The Departed” and any number of episodes of “Miami Vice,” and when it seems to begin moving into somewhat more uncharted waters—such as a scene in which Mazur’s real and ersatz wives wind up meeting—nothing comes of it. For his part, director Brad Furman, whose previous credits include the forgettable likes of “The Lincoln Lawyer” and “Runner, Runner,” handles the material in a slick but impersonal style that gets the job done, I suppose, but never quite conveys the constant state of danger that presumably defined Mazur‘s life undercover. Of course, considering that the film is based on Mazur’s own memoir, his fate is clearly not in doubt to anyone privy to that information going in. But, even factoring that in, there is too often a distinct lack of tension to the material, especially when one compares it to something like “Donnie Brasco,” which told a similar real-life story of an undercover agent in constant danger of being revealed but which still managed to maintain a level of suspense throughout.

What does work in “The Infiltrator” is the impressive lead performance by Bryan Cranston as Mazur. It's a tricky character to pull off because for large chunks of the film, he is essentially delivering two performances at the same time—besides playing Mazur, he is also playing Mazur playing Musella—and for the film to have any chance of working, he has to be completely believable in both roles. As it turns out, the years he spent playing Walter White, a mild-mannered family man who transforms himself into a vicious criminal, pay off further dividends here as Cranston is able to skillfully shift between the personas he is embodying without calling undue attention to them. In the single best scene in the film, his quicksilver ability to go from affable to nasty is beautifully displayed when Mazur is caught with his real wife by one of Escobar’s colleagues and forced to create a violent scene with a waiter in order to get out of the situation before too many questions are asked. It is a showy scene that might have been implausible in the wrong hands, but Cranston shifts gears from the mild to the murderous so subtly and yet so violently that it takes your breath away to watch him do it.

Since “The Infiltrator” is one of the few serious-minded and adult-oriented major films to come out in a summer filled with the usual array of silly junk aimed at kids on summer break, I almost hesitate to come down against it. Again, it does have its worthwhile aspects, such as the strong performance from Cranston and a well-played turn from the perennially underrated Diane Kruger as the phony fiancée. And yet, the film as a whole just never quite overcomes the inherent familiarity of its premise to become its own unique thing. Those looking for a story equal to Cranston’s contributions to it are liable to come away from it feeling slightly disappointed. 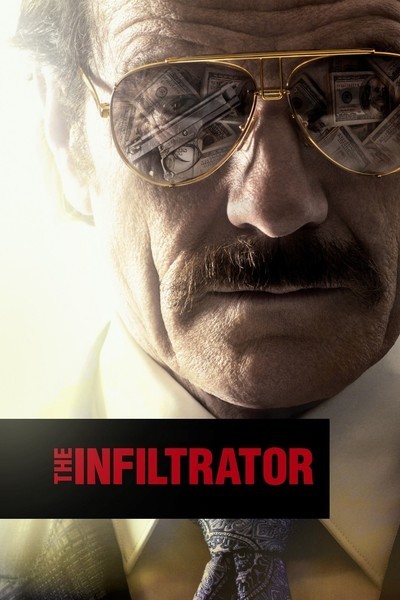 Rated R for strong violence, language throughout, some sexual content and drug material.

Writer (based on the book on)