I’m thinking of reviewing things. Well, just one thing I guess, a new Netflix film called “I’m Thinking of Ending Things” that either requires a great deal of thinking, or maybe none at all.

I’m thinking it’s a film that defies simple classification. It’s a work with a tone that’s best conveyed by mentioning the other work of its director, Charlie Kaufman. Like Kaufman’s “Being John Malkovich,” “Eternal Sunshine of the Spotless Mind,” and “Synecdoche, New York,” this adaptation of Iain Reid’s acclaimed novel takes a surreal approach to its analysis of the human condition. What’s it about? Well, it’s the simple story of a woman who goes to meet her new boyfriend’s parents on a snowy day that turns into a dangerous night because of the weather. That’s it really on the surface. But no Kaufman movie thrives on the surface.

The trip to a remote farmhouse is just the narrative skeleton on which Kaufman hangs arguably his most challenging film to date, a piece that verges on Lynchian in its surreal register, moving back and forth between reality and a dreamlike commentary on connection, although there may be even less of the former than it first appears. In a sense, all of Kaufman’s films have been about connection, but this one feels different in that it doesn’t have people pushing through this world in an effort to connect as much as realizing that they just can’t. There’s a line early in the film that haunted me throughout the next nearly two hours: “Other animals live in the present. Humans cannot. So they invented hope.” “I’m Thinking of Ending Things” is about human constructions like hope, happiness, connection, and even time. I’m thinking that description probably doesn’t help you.

I’m thinking I should start at the beginning. The great Jessie Buckley (“Wild Rose”) plays a woman whose name changes multiple times throughout the film. She may be Yvonne. She may be Lucy. She may not even be there? Over time, more aspects of her biography seem to shift and be rewritten, including her background and profession. She quotes poetry as if she wrote it and even lifts part of a Pauline Kael review wholesale when arguing a film's quality. Whoever she is, she narrates the story and begins that narration, which is pretty loyal to the book, by repeating the title multiple times. What exactly she means by “ending” isn’t clear. Is it suicide? Kaufman peppers in references that fuel this reading, including a conversation about David Foster Wallace, who committed suicide, and the aforementioned Kael-scripted argument over the quality of “A Woman Under the Influence,” in which the title character attempts suicide. Or could it be another kind of ending? Maybe an ending to the relationship with Jake (Jesse Plemons), with whom she is traveling to meet his parents? Maybe an ending to the way she sees the world? Maybe an ending to the way you do?

The opening scenes of “I’m Thinking of Ending Things” feel relatively straightforward, but even there Kaufman peppers in disorienting film techniques. While the woman narrates the story, which at first seems to be blending both her inner monologue with what’s happening, the film cuts to a high school janitor who seems to have no connection to our young couple. Why? Does she know him? How is he involved?

A sense of anxiety over the trip begins to rise, amplified by a tight 4:3 aspect ratio courtesy of Lukasz Zal ("Cold War") that forces the viewer to pay more attention to what's in frame and even to consider what's missing. Kaufman is playing with space and time before it’s even obvious. He regularly films scenes in the car between Jake and his girlfriend from the outside, blurring their faces with snow and filling the sound mix with wind. Something is just off as these people become less clear instead of more. Plemons and Buckley are both absolutely phenomenal here, finding relatable character beats within a script that would have stymied other performers, conveying a growing anxiety without resorting to cheap tricks to highlight it.

The feeling of an active panic attack amplifies at Jake’s family home. First, his parents take so long to come downstairs that the woman wonders if they even knew they were coming. When they do, played by Toni Collette and David Thewlis, they seem friendly enough, honestly eager to hear stories of how these two young lovebirds met, but Jake is consistently uncomfortable, almost antagonistic. And then things get truly surreal as mom and dad seem to shift through different phases of their lives in subsequent scenes, going from young to old and back again, as if we are witnessing highlights of their entire partnership on one snowy night. Jake and the woman end up leaving, but let’s just say they have trouble making it home on a night that’s repeatedly called “treacherous.”

“I’m Thinking of Ending Things” feels like a movie that could be hurt by the Netflix model. It’s not something that should be watched while being distracted by your phone. It demands attention to allow its mood to find its way under your skin or it really won’t work. It has a remarkable cumulative power, even as it narratively seems to make less and less sense. You have to give yourself over to it, and you'll be moved by some of its later imagery even if you have no idea how to explain why. Kaufman is trying to find a storytelling approach that goes beyond simple plot, conveying the loneliness and relative stasis of human existence. It’s a movie in which the two leads spend most of the film in a moving car and yet it feels like they can’t get anywhere. One says, “you slide into the onslaught of identical days,” which doesn’t just have added meaning in 2020 but seems essential to Kaufman’s approach. Yes, of course, all days are identical, because we are the ones who bring meaning to them, sometimes falsely and sometimes because we have to in order to survive these identical days. The title starts to turn in on itself. You can’t end things. Nothing ends. It just goes on. And even thinking of ending things could actually break the world in front of you.

I’m thinking I probably lost you right around here. “I’m Thinking of Ending Things” is a movie I’m obviously still rolling around in my mind. Roger Ebert notoriously wrote that he had to see “Synecdoche, New York” multiple times to fully appreciate it, and I’m eager to see this one again, away from trying to wrap my brain around how to review it even as it unfolded. It’s a movie that is undeniably complex in terms of symbolism and a more surreal final act than most people will be expecting, but it’s also one that I think works on a foundation of very relatable human emotion. All of Kaufman’s films do in the end. They’re about love, connection, aging, identity—things that haunt us all. Things philosophers and artists have been pondering for generations. Things we all think about. I'm thinking that Kaufman's film may in part even be about the futility of trying to dissect works of art like this one. Let them wash over you. I’m thinking I should stop thinking things. If only. 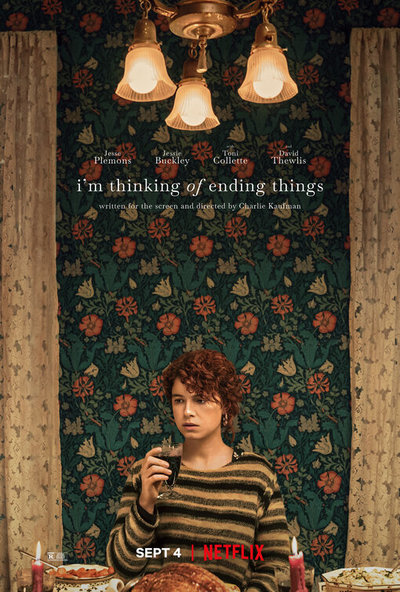