It’s the stuff of classic country tunes, this tale of heartache, honky-tonkin’ and hard-won redemption. It’s also the stuff of every movie about an underdog who dreams of music stardom, with its hardscrabble origins, a raw talent, inner demons and a final triumph upon a glittering stage.

But “Wild Rose” trashes those tropes and repeatedly upends your expectations of how a film like this is supposed to play out -- how it should look, how it should sound. It also has the benefit of an electrifying, star-making performance in Irish actress Jessie Buckley. As the title character, she is truly wild in all the best and worst possible ways: unfiltered and unpredictable, manic and magnetic, a charmer and a child. But while director Tom Harper gives Buckley the opportunity to take over the screen and mesmerize us, he also knows well enough to sit back and watch and listen during the quiet moments. When Buckley’s Rose allows herself to be vulnerable, to expose herself to the uncomfortable revelations that come with introspection, it can be as powerful as when she’s belting out a song from the heart.

From the start, “Wild Rose” has an unexpected premise: It’s about a young Scottish woman who aspires to be a country singer. (In an amusing running bit, she rolls her eyes and exasperatedly corrects anyone who refers to the genre as “Country & Western.”) Rose was raised in a working-class section of Glasgow, the only child of a longtime bakery attendant (a subtly no-nonsense Julie Walters, providing tough love). But she believes she should have been born in America, and that she belongs in Nashville.

When we first see Rose, she’s getting out of prison after a year behind bars on a drug charge, strutting away in a white-fringed leather jacket and matching cowboy boots that provide a stark contrast amid the gray Scottish skies and reflect her isolation. It’s telling that the first stop she makes is for a quick romp with her boyfriend (to whom she sings Patsy Cline’s “Walkin’ After Midnight” instead of ringing the doorbell) rather than to her mother’s house, where her two young children await. They carry the country legend names of Wynonna (Daisy Littlefield) and Lyle (Adam Mitchell). They are 8 and 5. They barely know her -- and she has no clue how to get to know them. As compelling as the flashy musical numbers can be in “Wild Rose,” seeing Rose struggle awkwardly to connect with her children during more intimate moments packs an even greater punch.

Despite being a single mother of two in her early 20s, Rose is still totally selfish at this point. A brash loner who says whatever’s on her mind -- usually in the most profane way possible, which is both shocking and adorable -- she has a tendency to undermine whatever progress she makes toward becoming responsible and reliable. She’s got swagger for days, but she can’t help getting in her own way. The great tension of “Wild Rose” comes not from wondering whether she’ll ever make it to Nashville to live her Grand Ole Opry dreams but rather whether she and her children will ever share a hug.

And yet for all her failures and frustrations, Rose comes alive when she sings. This is true both on stage at the local bar where they offer country line dancing lessons and in her own bubble of blissful oblivion, vacuuming with her ever-present headphones on while working as a housekeeper for a wealthy family. Sophie Okonedo brings a welcome sense of warmth and a different kind of maternal energy as the posh wife and mom who starts out as Rose’s employer but becomes a fan and maybe even a friend.

But just when you think you know where that relationship -- and Rose’s trajectory -- are headed, “Wild Rose” switches things up on you, the screenplay from Nicole Taylor offering consistent surprises. Something else that sets the film apart: its soundtrack of country music tunes from a who’s-who of powerhouse female artists, from Wynonna Judd to Bonnie Raitt to Trisha Yearwood to Kacey Musgraves in the quickest of cameos for those who are paying attention. “Wild Rose” may sound like a familiar tune, but you’ve never heard it performed quite like this. 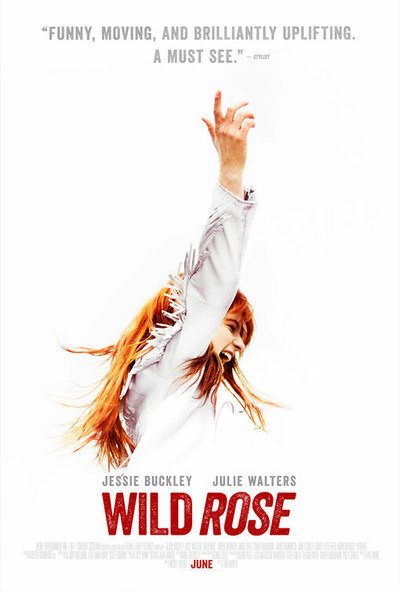