I Trapped the Devil

In 1960, Charles Beaumont adapted his short story “The Howling Man” for the second season of Rod Serling’s “The Twilight Zone.” In this clever chapter of arguably the most influential TV show of all time, a man is wandering through post-WWI Europe when he comes upon a castle occupied by a religious order. Surprisingly, they first refuse to allow him in, but they relent as a storm is coming. The man learns why they didn’t want a visitor when he hears howling and comes upon a man in a cell. The man professes his innocence and claims that the Brothers are insane. The Brothers respond by claiming that the man is literally the Devil. I thought of this episode often while watching Josh Lobo’s “I Trapped the Devil,” as it was clearly an inspiration for this clever-but-frustrating one-set piece about a man who believes he has captured evil.

Matt (AJ Bowen) and Karen (Susan Burke) have decided to visit Matt’s estranged brother Steve (Scott Poythress) over the holidays. No one has seen Steve in a long time, and there’s reason to worry about his sanity. The worry multiplies exponentially when Matt and Karen arrive. They are told they can’t stay, and Steve appears to be living on the edge of disarray. “I Trapped the Devil” is the kind of movie in which a ringing phone is quickly glared at like it’s haunted; everything is designed to imbue the piece with dread. Something very bad is happening at Steve’s house, and the instinct is to tell Matt & Karen to run as far and as fast as possible.

Of course, they don’t, and Steve eventually drops that he has trapped the literal devil in his basement, behind a heavy door with multiple locks. Karen and Matt go down there and sense something beyond how it appears on the surface: like their loved one has totally snapped and kidnapped an innocent man. A deep, booming voice that doesn’t sound so much like it’s coming from behind the door but from within their heads professes innocence. Has Steve finally snapped? When he outlines the reasons for his certainty to his brother, complete with a room filled with a complex display of how evil works and could be impacted by keeping the devil locked up, Matt starts to believe.

The set-up for “I Trapped the Devil” is strong and clever. The problem is that the 1960 version was a tight and compact 30 minutes of entertainment, whereas writer/director Lobo struggles to expand his version of “The Howling Man” to film length. "I Trapped the Devil" cracks in the middle as the dread gives way to slack storytelling. A movie like this needs to hum, but Lobo goes for a slow burn approach that doesn’t really suit the material, and requires every action and line to be over-written and directed. This mannered approach doesn’t so much add style as drain realism—I began to wonder if “I Trapped the Devil” didn’t start life as a play, where its three-character intensity could have been felt more urgently on the stage than it is conveyed on film.

Ultimately, “I Trapped the Devil” is a promising debut despite its flaws. It’s more ambitious than a lot of indie horror, even if the dread created by its opening act slips through its fingers by the final one. I’m still curious to see what Lobo does next, especially if it’s another semi-homage to my favorite TV show of all time. 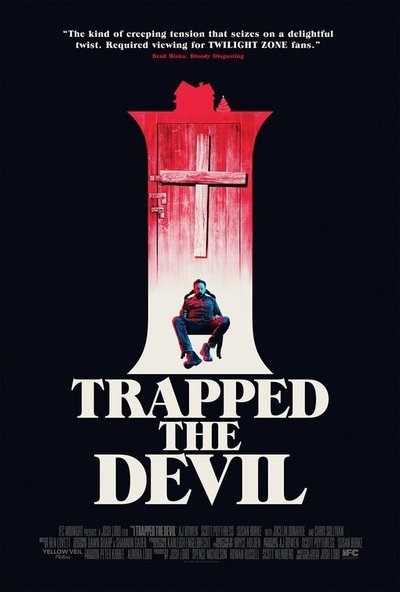