First, it's a funny, sharply observed feature-length autobiographical film about what it's like for a disabled man with cerebral palsy to move through a world whose architects barely acknowledge his existence, and whose inhabitants treat him with contempt or condescension when they notice him at all. "The people who gawk at me on the streets remind me of the profound ignorance in the world," he told PBS News Hour. "And I don’t mean to sound preachy, but it really affects my life, and, in turn, I’m sure, affects many other people with disabilities."

Second—and of equal, or possibly greater importance—"I Didn't See You There" is an experimental movie of great beauty. It's filled with images of ordinary objects and situations that have been filmed in such surprising and revealing ways by Davenport that when you encounter them again in your own life, you will see them differently, and think of Davenport's work.

There are moments when Davenport makes a point to show us how challenging life can be for him. He gets stuck on a commercial jetliner after it's landed. He tries to cross a downtown street where drivers ignore crosswalk lines. In his apartment, he listens to answering machine messages while pouring himself a drink with a shaky hand. (The last message is from the Internal Revenue Service.)

But for the most part, Davenport simply observes the world around him and reports back, as a poet or painter or street photographer might. He sees things that others don't, and he seems to have his creative antennae constantly extended because he believes there is beauty happening everywhere and he doesn't want to miss any of it.

Davenport thinks about freak shows and the monetization of difference when a traveling carnival sets up near his apartment. The freak show is no longer much of a presence in modern life, but it still sums up much of the world's attitude toward disability. One of the most striking things about Davenport's filmmaking is the way it pushes against that mentality, not just with spoken or written statements but images and sounds. It insists that Davenport be appreciated as an artist as well as a journalist-advocate.

The movie begins with a lateral tracking shot, taken from a small camera affixed to the arm of Davenport's wheelchair, showing a subway train at rest in a station as the filmmaker wheels along its length. Davenport's voice-over narration describes how, when a train starts to accelerate and pull away from the station after his wheelchair is moving in the same direction, there's a brief moment when both chair and train are moving at the same speed. Then we see the moment—one that a person without any mobility restrictions would probably never notice—and it lodges in the mind, like an evocative line of poetry that seems tossed-off, yet strikes us in a deep place.

Some of the more adventurous extended sections of the movie link back to early experimental and essay films ("Man With a Movie Camera" and Stan Brakhage's experimental Super 8mm home movies spring to mind at various points) as well as established, artistically-minded filmmakers like Michael Mann, Terence Davies, and Terrence Malick.

Davenport, too, is the kind of artist who will pause or suspend his narrative to let us admire a shot of a beam of light cutting through an otherwise dark room, or fixate on a reflection in a puddle, or point the camera up at the sky as the cameraperson glides and spins, transforming power lines, treetops, and clouds into elements in a moving collage of colors and shapes. A long traveling shot focuses on an iron fence whooshing by as Davenport's wheelchair traverses a city sidewalk. The black bars strobe-flash across the screen, and briefly seem to roll backwards.Another sequence consists mainly of closeups of of the pavement whizzing by underneath Davenport's wheelchair, scored with the sort of percussion track that you'd expect to hear in a film where George Clooney breaks into a vault. The borders of cobblestones and sidewalk stones, the grids of metal grates, the lettering on manhole covers, and the bright yellow, Lego-like plastic protrusions on rubber sidewalks flicker and blur, creating a modest little abstract-experimental film-within-the-film.

Even the title is multilayered. "I Didn't See You There" describes how the world and most of its inhabitants interact with the disabled. But it also describes what it's like to watch and listen to this movie, which is—on top of all its other achievements—a personal statement on the experience of modern urban life, with its distinct perils, aggravations, and unexpected moments of grace that you would never think to notice unless they happened to you personally. There isn't much narration because Davenport lets the images speak for him. 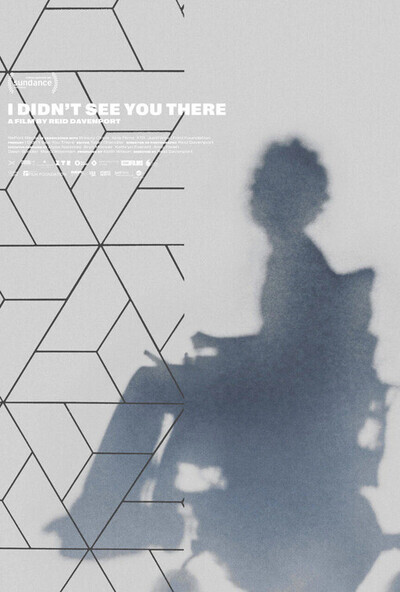