1970s feminist icon songbird Helen Reddy is mostly known for her 1972 hit “I Am Woman” where she declares in the rousing call-and-response chorus:

"I am strong (strong!)
I am invincible (invincible!)
I am woman!"

It was the anthem the era—and the ERA (Equal Rights Amendment)—needed. But "Leave Me Alone," the lead single off Reddy's followup album Long Hard Climb, goes harder. The chorus:

Just in case you don't get the message, please leave this woman alone. Music critic Lester Bangs called "Leave Me Alone" a "masterpiece" in his very funny review of Long Hard Climb ("I don’t blame Helen and the rest of womankind for being mad. All men but me are puds.") Reddy's heyday was the 1970s. She was about as successful in her career as it is possible to be. Three of her songs reached #1. She had multiple hits in both the Top 10 and the Top 40. Her fame did not travel into the 1980s, when feminism re-introduced itself, only this time wearing a cone-shaped bra and a "Boy Toy" belt. No shade on Madonna, but where could Reddy fit in in the 1980s? Short answer: she didn't. "I Am Woman," the new Reddy biopic, directed by Unjoo Moon, and written by Emma Jensen, is an attempt to tell Reddy's story, but despite a strong central performance by Tilda Cobham-Hervey, the film falls into the typical biopic trap, showing far more interest in Reddy's marriage problems than in the reason why we all care in the first place: Reddy's music, Reddy's voice.

"I Am Woman" starts with Reddy's arrival in New York City, fresh off of winning a singing contest in Australia. After a disheartening meeting with an executive at Mercury who calls her "sweetheart," she is back at square one. Living with her daughter in a furnished apartment, Reddy sings in nightclubs and tries to get her career off the ground. She makes an important friend in music journalist Lillian Roxon (Danielle Macdonald), who introduces her to Jeff Wald (Evan Peters), a hungry young agent. Wald decides to manage Reddy's career. They get married, and almost immediately Jeff stops promoting her and starts complaining about how messy the house is. Eventually, through sheer force of will power, she comes out with an album, and "I Am Woman" puts her over the edge and into the zeitgeist. It was the right song for the right moment.

Reddy, not a flashy performer, wasn't easily market-able. It's not apparent how huge her voice is until she lets loose, and then you wonder where she was hiding all that power. It's a disappointment that Reddy's actual voice wasn't used for "I Am Woman," but Australian pop singer Chelsea Cullen does an amazing job of approximating Reddy's tone and phrasing.

There are huge time leaps in "I Am Woman," the most baffling being the jump from 1974 to 1983. We see her become a star and then we flash forward almost 10 years, to where she's playing Vegas and her marriage is on the rocks. "I Am Woman" skips over Reddy's success years! Another time-leap brings us another decade forward, where she reminds her daughter she is "retired." But why? When did she make that decision? We can put the pieces together, but "I Am Woman" takes too much for granted. How can you tell Reddy's story and skip 1974 to 1983? That makes no sense.

To give just one example of Reddy's stature: Imagine you wanted to create a new music awards show, one to rival the Grammy's. How will you get millions of viewers to tune in to this brand new show? You'd need a famous host, right? If possible, you'd try to attract one of the biggest stars in the industry. In 2020 terms, that means you'd need an Adele, a Taylor Swift, a Beyonce. In 1973, Dick Clark created the American Music Awards for ABC, after ABC lost the contract for the Grammy's. And who was the host for the first three years of this new awards show's existence? Helen Reddy (alongside different co-hosts). All together, Reddy hosted the AMAs four times in the 1970s. Even if you're not aware of her discography, this AMA story is testament alone to her fame. She wasn't some "niche" songstress, or a one-hit wonder. She was an international superstar. This is the thing that "I Am Woman" fails to convey. "I Am Woman" made me yearn for an in-depth documentary about Reddy along the lines of "Linda Ronstadt: The Sound of My Voice."

So many biopics short-change the "art" part of the artist's journey. A recent example is "I Saw the Light," with Tom Hiddleston playing country-and-western icon Hank Williams. The film was so fascinated by Williams' drug addiction that it forgot to answer (or even ask) the most important questions: Why is Hank Williams important? What was going on in the music around him that made him stand out? Judging by "I Saw the Light," you would think that Williams' only legacy was dying of an overdose. "Get On Up," the James Brown biopic, featuring an explosive performance from the late Chadwick Boseman, fell into a similar trap. People's personal lives are interesting and scandalous, but the reason we care about James Brown is because of the music James Brown made. Some biopics, like "What's Love Got to Do With It?", get the mix right. Films like “8 Mile” and “The Rose” aren't strictly biopics, but by lightly fictionalizing the central figures of Eminem and Janis Joplin, the films are then freed up to examine the specific environments and psychologies of these artists. Some of the best recent biopics have gone a totally unconventional route: "Love & Mercy" and “I’m Not There" free themselves from all constraints, and in so doing they have their cake and eat it too. The life of the artist is important but the art is the most important. What was special about this person? Why do they matter?

"I Am Woman" is a start in the right direction. However, based on this film you might think that the most interesting thing about Reddy is that she married her manager who then got addicted to cocaine. It's a frustratingly shallow approach to a singer who deserves better.

Now in theaters and on digital platforms. 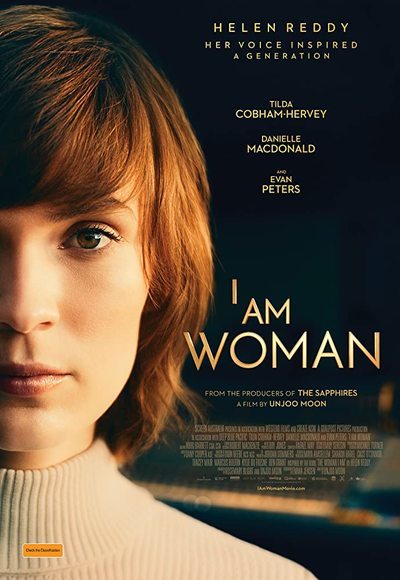