Linda Ronstadt: The Sound of My Voice

“Linda Ronstadt: The Sound of My Voice” is a disappointingly conventional documentary. There are too many clips of talking heads telling us how great Ronstadt is and how important she is while we wait for the next archival clip that actually shows us.

There is a montage showing her photograph on dozens of magazine covers and archival clips with a small sample of the many awards she received. Kevin Kline says he wept when he first heard her sing the aria from “Pirates of Penzance,” famously one of the most challenging pieces ever written. Dolly Parton says Ronstadt could sing anything and was a perfectionist in the recording studio, while also making one of the documentary’s few specific insights when she compares her intuitive approach to singing to Ronstadt’s more analytic style. It would be great to hear more about that, but the commentary in this film has more affection than insight.

There is some entertainment value in hearing from a couple of the commentators, especially a repeatedly befuddled recording industry executive who underestimates Ronstadt’s talent, her fans, and her priorities when she decided to switch genres from rock and pop and country to the American Songbook, operetta, and traditional Mexican folk songs. But none of it has the vitality and excitement of Ronstadt herself during the performances we get to hear in frustratingly brief footage.

Ronstadt grew up in Tucson, near the Mexican border, which meant that the radio she calls her “best friend” played stations from both countries. Her grandfather was a successful inventor who spent all his money trying to find a cure for his wife’s Parkinson’s disease. Two generations later, the same disease would end the career of his granddaughter. Ronstadt’s family loved music, and they sang together constantly. Her father sang the Mexican songs of his heritage and her mother loved Gilbert and Sullivan and Frank Sinatra. From the beginning, she was a musical polymath, and for her there were no lines between genres. “People would think that I was trying to re-invent myself. But I never invented myself,” she says. “I just popped out into the world.”

She loved to sing, no matter what kind of songs they were. Her heart was in the emotion of the ballads. What mattered to her was whether the songs meant something. She says, “Every song that I sing has a face I sing it to.”

Ronstadt first sang professionally as a teenager with her sister and brother in Tucson, and then followed their guitarist, Bobby Kimmel, to Los Angeles at age 18. It was 1964, when she could rent a place in Malibu for $80 a month, and the culture was shifting from Elvis and Sinatra to the Kingston Trio and the Beatles. She quickly became part of a community of musicians including Neil Young (she sang back-up on “Heart of Gold”), the Eagles (founders Glenn Frey and Don Henley first worked together when Ronstadt hired them for her band and she made their song “Desperado” a success), and J.D. Souther (he was her boyfriend, produced her Don’t Cry Now album, and wrote some of her early hits).

After she performed at the legendary Troubador as a part of a trio called the Stone Poneys, the response from a record label was immediate: “I don’t know about you two boys,” Kimmel recalls being told, “but we want the girl singer.”

That was not what Ronstadt had in mind. “I was a harmony singer on my own,” she says. She never had a commitment to a genre, but she did have a commitment to partnership with other musicians, and nothing made her happier than harmonizing. One of the most revealing comments she makes in the film is her reaction to hearing Emmylou Harris for the first time: “I could be jealous or I could be a slobbering fan” and maybe get the chance to collaborate with her. She did, along with another singer she admired, Dolly Parton, on the Grammy-winning 1987 album Trio, followed by Trio II in 1999. And her collaboration with Sinatra arranger/conductor Nelson Riddle on American Songbook standards, as she said, “taking the songs out of the elevator,” was a tribute to her late mother, who loved those songs, and among her best-selling albums.

This is not the usual “sex, drugs, and rock and roll,” “Behind the Music”-style story. Ronstadt abused diet pills for a while and had some high-profile romances, but she was always completely devoted to her singing. Fans and critics often make a binary distinction: Musician or rock star? Ronstadt was, above all, a singer.

Asked why she sings, she says, it’s for the same reasons birds sing: “They sing for a mate, to claim their territory, or simply to give voice to the delight of being alive in the midst of a beautiful day, so the subsequent generations won’t forget what the current generation endured or dreamed or delighted in.” No one exemplified all of that better than Linda Ronstadt, and if this film inspires people to rediscover her music, it is worth seeing. 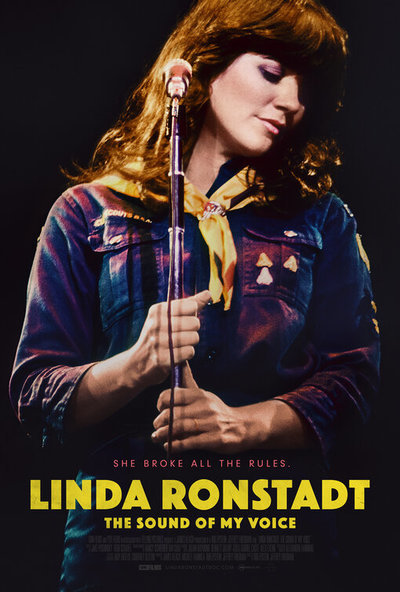 Linda Ronstadt as Herself

Dolly Parton as Herself

Emmylou Harris as Herself

Bonnie Raitt as Herself

Jackson Browne as Himself

Don Henley as Himself

David Geffen as Himself

Cameron Crowe as Himself

Aaron Neville as Himself

Johnny Carson as Himself (archive footage)

Johnny Cash as Himself (archive footage)

Glenn Frey as Himself (archive footage)

Ringo Starr as Himself (archive footage)