I Am Big Bird: The Caroll Spinney Story

When Caroll Spinney was a kid, he showed an interest in puppets, and was teased in school about it. His father was a stern man with a bad temper, but his mother encouraged Spinney's interest and actually built a puppet theatre for him. As Caroll Spinney reminisces in the wonderful documentary, "I Am Big Bird," "She didn't realize she was giving me my career."

"I Am Big Bird" documents Caroll Spinney's forty-plus years playing the big yellow bird (and the greasy grouch Oscar in the trash can - maybe one of the best dual roles in history) on "Sesame Street". Who is this man? How did he create Big Bird, an icon known the world over? What went into that creation? Directed by Dave LaMattina and Chad N. Walker, "I Am Big Bird" features lengthy interviews with Spinney, his wife and manager Debra, Frank Oz, the cast members of "Sesame Street" ("Bob," "Luis," "Maria," "Susan"), as well as the producers and head writers of the show. It is a warm and enthusiastic celebration of Spinney as a man and a performer.

In an essay on 1985's "Sesame Street Presents: Follow That Bird," for Movie Mezzanine, RogerEbert.com contributor Odie Henderson observes "...one swears that there really is something going on behind those fake Muppet eyes, something alive and relatable. Such is the genius of Jim Henson’s creations. I have always accepted them as sentient beings." I have too. Those puppets are alive. Pulling back the curtain to see how Carrol Spinney "does it" is not only a revelation of technique but a reminder of just how brilliant he is as a puppeteer and as an actor.

Spinney walks us through what is involved in playing Big Bird. He is inside the huge Big Bird suit, and his right arm is lifted up into Big Bird's head to make the mouth move. With his pinky finger, he manipulates Big Bird's eyelids and eyeballs with a little lever up in the head. Spinney's left arm is down in Big Bird's left arm, and the right arm is attached by a triangle of invisible fishing wire, so it moves in response on its own. Spinney cannot see out of the suit, so strapped to his torso is a tiny monitor showing him the outer world (only in reverse). And taped in front of his eyes, on the interior of the suit, is the script, with his lines circled meticulously. The term right brain/left brain does not even begin to cover the demands of the character. One thinks of Charlie Chaplin on the assembly line in "Modern Times" (before it gets away from him, that is). There is so much technical stuff that needs to be managed, just to make the bird walk and talk, and then when you put on top of that the voice, and the amount of emotion and thought and personality that is in the performance ... anybody else might short-out having to keep all of those balls in the air, but Spinney was set free.

As a craft, puppeteering goes back to ancient times, and in the Middle Ages or the Renaissance, Spinney would have traveled around in a theatre troupe, but he came up at a very specific moment when television and puppeteering were being revolutionized, due to the genius of Jim Henson, and the pioneering children's show "Sesame Street." Jim Henson first saw Caroll Spinney at a puppeteer festival. Spinney had worked on an act that involved puppets acting in front of video footage projected on a screen behind them. But the spotlights shining at the stage had blurred out the projection screen, essentially ruining Spinney's act. When Spinney realized the snafu, there was nothing to do but walk behind the projection screen and start pulling at his hair in an exaggerated manner (causing the baffled audience to erupt into laughter at his silhouette). The act was a bust, but Henson came to see Spinney backstage. "I liked what you were trying to do," said Henson. He invited Spinney to join him and his team in New York to create a new television show for children called "Sesame Street".

Spinney at first didn't want to do it and he found the work so difficult at first that he almost quit. Frank Oz remembers, "He didn't fit in and he knew it." The other puppeteers were all clustered together beneath the screen, so there was a camaraderie amongst then that Spinney, isolated in the bird suit, did not share. (It is interesting that Spinney's two "Sesame Street" characters, Big Bird and Oscar, are both isolated - one by a bird-suit, and one by a trash can. Spinney recalls that everything he did as a child was "solo" too. Jim Henson was no dummy: he sensed that in Spinney.)

Big Bird was first conceived of as a "country yokel", but something was missing in that interpretation, something essential. Finally Spinney landed upon the idea that Big Bird was, essentially, a 6-year-old kid who also happened to be a gigantic fluffy yellow bird. The other Muppets on the block, Bert and Ernie, Grover, Kermit, The Count, were of more indeterminate age and experience. Bert and Ernie were independent enough to have their own apartment. Kermit had a job as a roving reporter. The Count clearly had centuries of experience behind his counting mania. But Big Bird was different. Big Bird needed to be cared for. He was the audience. (With the rise of Elmo, that dynamic changed. 5 and 6 year-olds related to Big Bird. Elmo is geared more at the 2-year-old set. Spinney treats the change philosophically. At 81 years old, the rigors of playing Big Bird impact him more, and having a little bit of time off seems okay to him.)

Luis Delgado (who played Luis on the show) remembers some friction on the set between director/head writer Jon Stone and Spinney. They were both difficult men, and there were times when things got tense. One time Stone yelled at Spinney, and Delgado remembers yelling at Stone to cut it out. Delgado laughs at the memory, saying, "I could have lost my job. But Luis is very protective of Big Bird." It's a simple interview moment, but indicative of the larger power of what Spinney created. Even Spinney's kids, who talk in the documentary about missing their dad a lot when they were growing up since he traveled so much, say that all they had to do was turn on "Sesame Street" and they could "visit" their dad. Big Bird and their Dad was the same thing. No separation between character and part.

Big Bird's presence on the show (along with all of the educational counting and spelling games built into the show's structure) allowed "Sesame Street" to tackle many difficult topics through his character's perception of events. In one of the most famous "Sesame Street" episodes ever aired, the grown-ups on the block have to explain to Big Bird that Mr. Hooper, who owned the corner store, had died and was not coming back. (Will Lee, the actor who played Mr. Hooper, had actually died, and instead of pretending Mr. Hooper was on vacation in Bermuda, the creators of the show decided to address the issue head-on.) No one who has seen that episode will ever forget it. (Molly Eichel wrote a wonderful article at the A.V. Club about the episode.) Spinney remembers filming that episode, with tears soaking his face inside the suit at the end of it.

Similarly, when Jim Henson died, shocking everyone (interview subjects tear up when they talk about his passing in 1990), Big Bird sang "It's Not That Easy Being Green" at Henson's funeral, a farewell to Kermit the Frog that is a heart-rending piece of footage. The miracle is that Spinney was able to get through it. In acting classes, it is common for teachers to tell students that during sad scenes, perhaps the best choice is to hold back the tears, because that leaves room for the audience to cry. At Henson's funeral, Spinney shows the eternal truth of such advice. He, the actor, had to hold back his own tears in order to make it through that song. He wept later, by himself. Spinney's understanding of what was needed in that moment, that the moment was bigger than his own personal loss, and the catharsis he would provide for others, is near transcendent.

There are many interesting elements of the journey shown in the documentary: Big Bird's groundbreaking 1983 trip to China for the Sesame Workshop special "Big Bird in China", where he was treated like Mick Jagger, with throngs of people flooding after him through the streets. In 1986, NASA approached Spinney to go into space on the space shuttle Challenger, but Spinney's participation was canceled at the last minute because there wasn't room for the Big Bird suit on board. More recently, Mitt Romney put Big Bird at the forefront of the national conversation by joking, after promising to cut funding to PBS, "I like Big Bird!" Spinney ended up appearing on Saturday Night Live's Weekend Update to "comment" on the controversy, and "anchorman" Seth Meyers seemed honestly in awe of the fact that it was actually Big Bird sitting there in the chair next to him.

Spinney states that he wants to play Big Bird as long as he can. He has an apprentice, Matt Vogel, who steps in and acts as Big Bird's "double" at times when Spinney needs a break. Vogel is honest about the challenges of such a job (he's been doing it for 15 years now), and he knows that "imitating" Caroll Spinney is not an option. His Big Bird will have to be his Big Bird, although hopefully maintaining the integrity of the character.

"I Am Big Bird" is a loving personal profile of Spinney, with memories and anecdotes shared by his wife, his children, his co-workers and friends. His supportive wife observes that Spinney speaks of past events with an immediacy that is child-like: "Even if it happened sixty years ago, it's like it's happening now." Spinney opens up about his loneliness as a child, his fear of his father, his devastation at the dissolution of his first marriage. All is fresh for him, all is raw, tears come up in Spinney's eyes when he speaks of events that happened to him in the first grade. It is this same accessibility to emotion, this unselfconsciousness about his own vulnerability that helps make him who he is as a performer, that helps make Big Bird what he is. 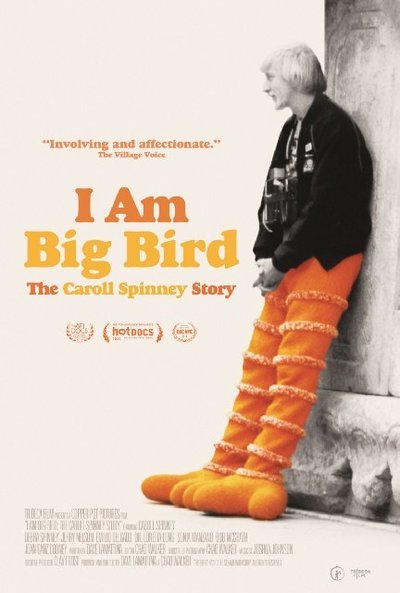 Caroll Spinney as Big Bird / Oscar the Grouch / Himself