A smart, ironic documentary named “Hype!” charts the rise of grunge and its enormous impact on the Seattle scene (at the height of the phenomenon, Spin magazine was gushing, “Seattle is to the rock 'n' roll world what Bethlehem is to Christianity”). Local types are more sardonic. Art Chantry, who designed grunge posters and album covers, observes: “A lot of occult stuff takes place here. The first flying saucers were sighted in the Pacific Northwest. This is the serial killer capital of the world. The Manson family used to vacation up this way.” What grunge did in the mid-'80s was take heavy metal, punk and old time rock 'n' roll and put it together into a sound that was looser and more fun than a lot of the music on the national scene. A local label named Sub Pop, realistically observing that none of the Seattle bands was known outside of town, promoted its label instead of its bands. Sub Pop flew a British journalist into town, he toured the clubs and wrote an influential article for the UK music magazine Melody Maker. Soon, the movie says, “bands that had never played live professionally were being signed up by labels.” “Hype!” doesn't put down the music; it likes grunge but is amused by the way publicity and image took over, turning a local movement into a commodity. Bands like Pearl Jam, Soundgarden, Mudhoney and Nirvana are seen performing, but there's also early video footage of obscure club bands, including one where a drummer falls onto a guitarist and the band keeps playing. Nothing stopped a performance, photographer Charles Peterson remembers; audiences and band members would drink together, often during a performance, and fans came to party, not criticize (he contrasts Seattle crowds with sniffy New Yorkers saying “I think they just missed a note”).

By the end, in the early 1990s, “Pearl Jam” was the answer to a question on “Jeopardy,” and Kurt Cobain's Nirvana was one of the hottest bands in the country. Then Cobain, who had a history of drug problems, killed himself. In such cases it is always said that the publicity and the pressure got to him, but actually, of course, the drugs got to him. There is touching footage of a candlelight vigil at the Space Needle in his honor--and in a way his story is still playing out through his wife, Courtney Love, who got her own act together, emerged as a powerful actress in “The People vs. Larry Flynt” and may prove to be the most important figure produced by the period, if not by the music.

Pearl Jam's Eddie Vedder is probably the key musical figure from grunge, and in “Hype!” he comes across as intelligent and thoughtful. While acknowledging that the grunge phenomenon was dissipated by its fame (it was most at home in small local clubs), he sounds like the survivor of a war or a shipwreck: “It will be a tragedy if we don't do something with this.” But, of course, they did.

“Hype!” has been directed by Doug Pray and photographed by Robert Bennett, who give you a real sense of the music and its excitement, while at the same time keeping a certain distance as journalists. They find funny, articulate local observers--producers, journalists, musicians, fans, publicists--who lived through the scene and kept it in perspective. Producer Steve Fisk says the whole thing reminds him of Baby Huey, waddling around making delightful discoveries: The record labels waddled to Austin, Texas, and Athens, Ga., and then they waddled to Seattle and waddled on to Minneapolis: “We were just like part of that process.” 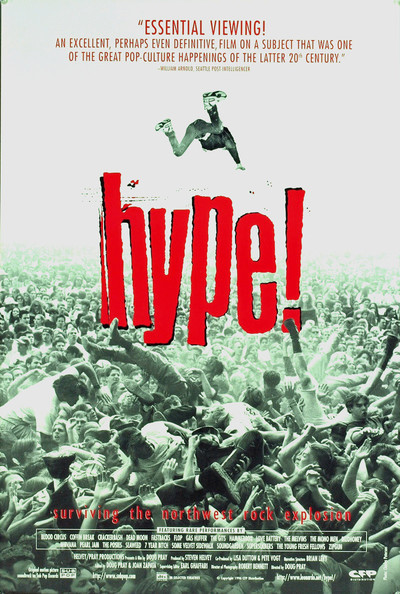