Pitts had no plans to play the lead in his own film, and I learn from Variety that he "was forced to take on the main role when his leading actor proved unreliable." He hardly feels like a replacement. He has an uncanny presence. With his severe, tense face beneath a dark brow, he suggests Daniel Day-Lewis. In early scenes, he shares the happiness of his wife and little daughter (Mitra Hajjar and Saba Yaghoobi), but then he comes home to an empty apartment and learns only after a long and frustrating wait that they have been identified as victims caught in a crossfire between insurgents and police.

They were not participants in whatever was happening. They were in the wrong place. When Ali learns the news, there's no emotional outburst. He remains contained and almost ominously silent as he identifies his wife's body but cannot identify a little girl in the morgue. He visits the scene of their deaths, with chalk body outlines still on the pavement, one smaller than the other. He parks for days outside his daughter's school, as if she would come smiling down the stairs.

Before this happened, sometimes he would take a hunting rifle into a forest outside Tehran. Now he returns to a vantage point overlooking an expressway and fires at a police car. How he is identified as the shooter is unclear, but he is, and the second half of the film involves a police manhunt that comes down to him being led in handcuffs through the trees by an unhappy rookie cop and his bullying superior.

You are left free to determine what their long time in the woods represents. Or the personality conflict between the two cops. When they become lost while trying to bring their prisoner in, their three fates become linked. This dilemma won't develop as you may expect, and the more you consider what happens, the more labyrinthine and suggestive are the political undertones. As I followed step by step the unfolding of the ending, I could see how the plot makes perfect sense in a sinister way that adds one brilliant additional twist.

Ali, the hunter, has only a handful of words in the last half of the movie, and not many more before his family disappears. His existence supplies his dialogue. He is a man whose family's fate is not of much significance to the police bureaucracy, and whose life itself has no meaning except in his anguished actions. There is a deep irony in the scenes involving the police. And many long silences in which we're free to imagine his thoughts.

"A Separation," another recent film from Iran, also centers on a married couple and their daughter. They have many thoughts and many words to express them. The solitary hunter here has been pushed outside his society's courts of appeal. His action itself, when he fires on the highway, takes lives of people unknown to him. By the same token, no one targeted his wife and daughter. They died as a result of the nature of their society. Nothing can be said. 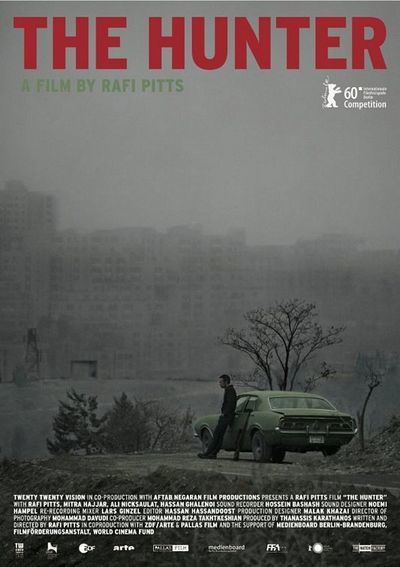