“The company of wolves is better than that of men.” So says a woman to her son in the effective prologue to “Hunted,” the latest original horror film to land on Shudder today. One of the best streaming services in the world, Shudder endeavors to elevate genre films that might otherwise get lost in the increasingly large shuffle of never-ending content. Highlights include "Blood Quantum," "Z," and "Anything for Jackson." I can’t wait to see what they do in 2021, but “Hunted” is a misstep.

That early line is key to understanding the approach to survival horror taken here by director Vincent Paronnaud, in a much different gear than his Oscar-nominated co-directorial work on “Persepolis.” With echoes of vengeance films like “Revenge” or “I Spit on Your Grave,” “Hunted” is the relatively simple story of a woman forced to fight for her life after being kidnapped by a couple of sociopaths. Paronnaud and co-writer Léa Pernollet attempt to elevate their narrative by framing it all in the context of mythology and fables. The red outfit worn by the heroine here is not accidental, and there are wolves of both the animal and human nature.

Eve (Lucie Debay), the only character in “Hunted” with a name, is working on a construction project in an unnamed country, but she seems like an outsider in early scenes. The work isn’t going well, and neither is a relationship. She decides to blow off steam by going to a bar, where she’s hit on by a true asshole within minutes. A man (Arieh Worthalter) rushes her to rescue and the two hit it off. They dance. They kiss. They go to the man’s car. And then things go very wrong. An accomplice (Ciaran O’Brien) gets in the front seat and begins driving. Eve is being kidnapped, and she’s in for the worst night of her life.

After a truly surreal car accident involving a kiss and a wild boar, Eve finds herself freed from her captors and fleeing through the woods. The bulk of “Hunted” consists of the increasingly terrified Eve trying to evade being captured again, but Paronnaud spends a truly unusual amount of time with his villains instead of his hero. “Hunted” falters because of this POV. Paronnaud seems enraptured by his sociopath as he watches recordings of his previous crimes and pokes his finger in the bloody wound of his partner in awfulness. Worthalter gives an unhinged, broad performance, which is fine, but it sometimes feels like it’s from a different movie than the one that Debay is in. She’s going for gritty survivalism—everyone else is doing a bad riff on Quentin Tarantino or Eli Roth. It creates a disconnect in the storytelling that pervades the whole piece, keeping it from finding a consistent tone. "Hunted" may look better than a lot of “hunting horror” movies—a genre often typified by cheap filmmaking since it doesn’t require much more than a cast, camera, and nearby woods—but it’s ultimately no smarter. And even its clever twists, like with the opening story and the Red Riding Hood allusions, start to feel like window dressing for a shallow piece of filmmaking.

“Hunted” kind of comes together in its final scenes as it unleashes Eve on her tormentor, providing that catharsis this genre typically reaches. And Debay is solid throughout, selling the believability of Eve’s nightmare in a way that the rest of the film often fights against. There’s a better version of “Hunted” that either leans more into its surreal flights of fancy or settles into gritty, tense realism. “Hunted” gets caught in the middle. 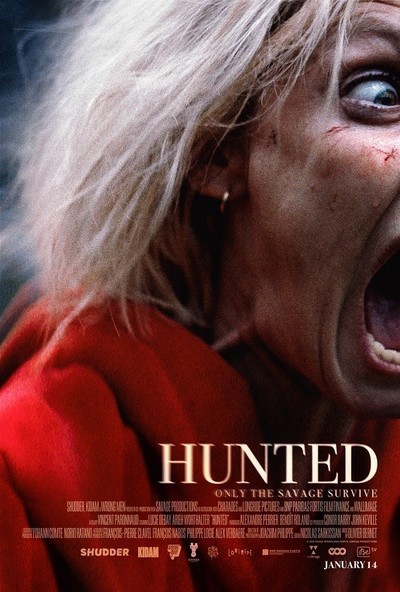 Arieh Worthalter as The Handsome Guy

Gilles Vandeweerd as The Husband

Ciaran O'Brien as The Accomplice

Christian Bronchart as The Foreman