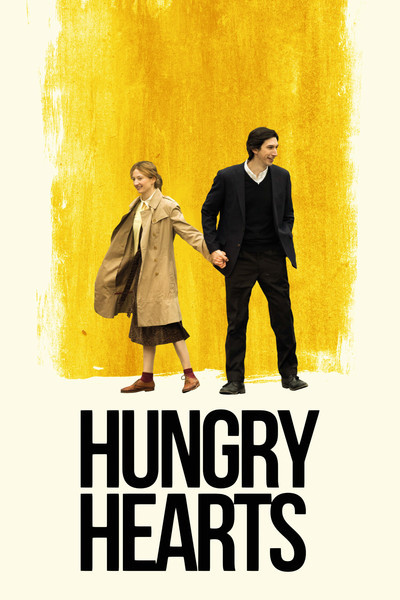 The title “Hungry Hearts” is redolent of longing, and of course of Bruce Springsteen, who wrote a similarly-titled song years ago (the object organ was singular, not plural), offered it to The Ramones, got turned down, and made it into a chart hit for himself instead. Catchy tune. That this movie should use a variation on its title strikes me as false advertising. A better name for this movie would maybe be “The Ghastly Ones.”

Directed by Saverio Costanzo, the movie operates at a much higher level of craft than the Andy Milligan cheapie horror picture from which I lifted my suggested title. But it is an equally painful cinematic experience, and it is painful in a completely unrewarding way. It is earnest and tortured and pointless, in a very self-serious suffer-for/with-art fashion. It opens with its lead characters Jude (Adam Driver) and Mina (Alba Rohrwacher) stuck in the bathroom of a Chinese restaurant together. The meet-cute-in-the-era-of-“Girls” dialogue is de rigueur icky/frank, with Jude apologizing for the unpleasant odor of his recent deposit to Mina prior to their rescue. Their awkward shared moment over, they fall into bed with each other, she discovers she’s pregnant, the couple rush to be wed, and at their Coney Island wedding reception scene, the viewer is treated to a shot of a dead deer on the boardwalk outside their hipster-chintzy celebration venue. Symbolism, people.

Because Mina and Jude then move into a dreary walk-up on the Upper West Side of Manhattan, just a few blocks from the Dakota, some folks who’ve written about this film have likened it to “Rosemary’s Baby.” This is off-base for several reasons, not the least of which is that you kind of like poor Rosemary in that movie. No, what “Hungry Hearts” most resembles is a nightmare enactment of “Knocked Up”: a couple that barely knows each other decide to embark on child-rearing together. Mina’s eccentricities in these matters are hinted at when she enthusiastically informs Jude that a psychic has deemed their yet-to-be-born baby an “indigo child” (it’s kinda like when a psychic tells you, a person who has already been born, that you have a “blue” aura). Seems harmless enough. Only once the baby’s born, Mina puts it on a weird vegan regimen. Jude doesn’t have the intestinal fortitude to resist this nonsense with any conviction, so he starts taking the kid to a church where he surreptitiously slips him (the kid is never referred to by name) some ham (no, I’m not making this up). Mina retaliates by force-feeding the child some kind of anti-nutrient oil. At this point, you may look at your watch. Imagine your surprise when you learn there’s still about an hour’s worth of movie still to come.

This really is the sort of movie which, when you describe it to a relative who’s asking you what you’ve reviewed lately (presuming you’re a movie reviewer), they would say, “Who would want to see a movie like that?” If the movie were actually a good one—which I think in this case would be impossible, not because the material is so inherently intransigent, but because the specifics of the materials are contrived in such bad faith—you’d be left stammering impotently. But because the movie is this very bad one, you just say, “Right?” Adam Driver’s a good actor, and Alba Rohrwacher’s maybe a too-good one, because I can’t even input her name without feeling the absolute idiot hatefulness of the character she plays here, and Roberta Maxwell, who plays Jude’s mother and takes a decisive hand in the final quarter of the movie, is fine as well. But the film, which I think aspires to be about different varieties of love and how they can pull us in contradictory directions, is such a determined miserabilist slog that it only ever registers as a high-handed exercise in sadism.