Suppose the news got out that the world was going to be destroyed by an oncoming meteor, but by the time that the proverbial hour was nigh you had long since gotten most of the fear about the apocalypse out of your system. The question—when that last day finally arrived, how would you approach it? Would you go out rioting, rampaging, and pillaging, secure in the knowledge that you would most likely not have to later try to explain to a judge or congressional inquiry that it either didn’t happen or was meant simply out of love? On the other hand, would you be more accepting of the inevitable and go about that day with a far-more chill and laid-back attitude? The mildly apocalyptic indie comedy-drama “How It Ends” utilizes the latter approach, and while it's the one that I like to think I would embrace in such a situation, I can only hope that it would prove to be funnier and more incisive than the one depicted here.

Set in Los Angeles on a bright and sunny day that seems utterly ordinary—assuming you overlook the lack of people or traffic on the streets, or the occasional look at the arc of the oncoming meteor against the brilliant blue sky—the film focuses on Liza (Zoe Lister-Jones, who also co-wrote and co-directed the film with Daryl Wein). She faces the last day of her existence with money in the bank from having designed a wildly successful app, memories of a number of relationships that ended badly, and the constant presence of her teenaged self (Cailee Spaeny), who struggles to keep her from making more of the bad choices that have marred her life so far. (The conceit is that while such younger selves are normally seen only by their older versions, the dynamic of the last day of existence has made them visible to everyone.)

After tucking into a breakfast of pancakes and wine and hitting the local weed shop, Liza’s only real plan for her last day is to attend an apocalypse party being thrown by a friend (Whitney Cummings) who promises that “Pauly Shore’s coming”—possibly as a way of making her guests feel somewhat better about their upcoming annihilation. With the counsel of her younger self, she eventually decides to spend the day leading up to the party looking up certain people from her past and attempting to get closure with them at last. This plan becomes slightly more complicated when her car is stolen, forcing the Lizas to head out on foot to make their rounds. (Alas, there is no scene in which they attempt to book an Uber.) This might be a major inconvenience for them, but it does give them the opportunity to run into any number of oddballs along the way.

And oh, what a collection of oddballs that Lister-Jones and Wein have managed to assemble here. There's Nick Kroll as a guy who has just cleaned out the pot store before Liza arrives, and is planning on riding things out alone in a tent, unless Liza would like to stay with him, of course. Logan Marshall-Green is the nice guy she let get away. Bradley Whitford and Helen Hunt are her spectacularly self-absorbed divorced parents. Olivia Wilde plays a former friend that Liza abandoned when she tried warning Liza that the guy she was seeing was a sleaze. Lamorne Morris is that sleazy ex, who is being inundated by a litany of exes seeking closure. Rob Huebel and Paul Scheer are neighbors who aren’t letting the impending apocalypse interrupt their argument about recycling protocol. Singer Sharon Van Etten even pops up as a street singer to do a couple of songs. How to explain the presence of all these people (and I have deliberately left out mention of a couple of others)? Well, the film was shot last summer during the height of COVID—perhaps they were all eager to just get out of the house for a few minutes.

It certainly wasn’t because of the material they were working with. While I like the laid-back attitude the filmmakers apply to the theoretically devastating situation, it quickly becomes apparent that attitude is the only thing the film really has to offer to viewers. Although there are a few amusing moments here and there, the comedic situations are too droll for their own good and too often seem to waste potentially interesting ideas. (The notion of people being accompanied by their younger selves is promising but with one single exception—which proves to be the funnest scene in the film—nothing is done with it.) Likewise, the more serious-minded moments fail to stick because they are too thinly drawn to provide either Liza or those of us in the audience with the kind of cathartic emotional payoff that they are trying to achieve. And the film's entire structure—a revue-like format where a new famous friend pops up to riff for a few minutes—is so rigid, despite its otherwise chill nature, that it soon grows monotonous. Even at a relatively brief 82 minutes, many viewers may find themselves checking their watches and wondering what could possibly be keeping that meteor.

I first saw “How It Ends” at this year’s South by Southwest Film Festival and found it to be a tedious exercise in half-baked whimsy that just didn’t work for me. Before writing this review, I decided to watch it again, to experience it without being inundated with other festival screenings, only to find my feelings unchanged. Of course, I'm fully aware that humor is highly subjective and that what struck me as being kind of a drag might come across as both hilarious and insightful to others. Therefore, while I cannot recommend the film, I would say that if the conceit sounds interesting/amusing to you, you might get more out of it than I did.

For everyone else, perhaps I could recommend a couple of other movies that have employed a similr concept in a more effective manner. For example, Richard Lester’s cult favorite “The Bed Sitting Room” (1969) brought together some of Britain’s greatest comedic talents (including Dudley Moore, Peter Cook, Spike Milligan and Marty Feldman) to show a handful of survivors of nuclear apocalypse waiting out the eventual end of everything, amidst such bizarre sights as the BBC going from house to house to deliver the news to Ralph Richardson mutating into the titular creation. “This Is the End” (2013) was a noisy and often gross comedy about a group of celebrity pals facing the apocalypse that nevertheless managed to present moments of actual insight amidst the crudity. Perhaps most applicable is Don McKellar’s “Last Night” (1998), a lovely and observant Canadian film about a group of people (including Sandra Oh, Sarah Polley and Genevieve Bujold) facing the last six hours of humanity in ways both funny and poignant. (David Cronenberg even turns up as a gas company employee charged with informing customers that their service will continue right up to the end of everything.) All of these film do a much better job of mining the end of everything for both comedy and drama than “How It Ends” ever manages to accomplish. 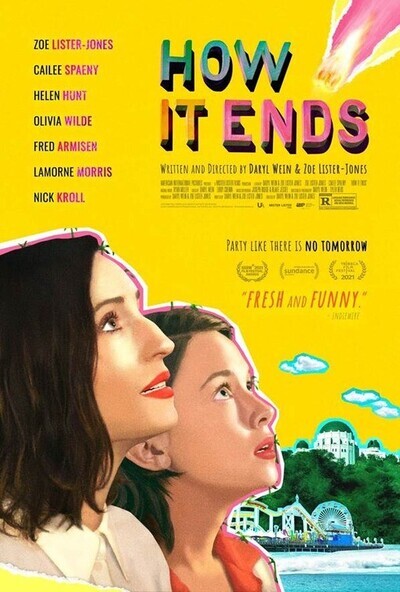 Rated R for language throughout, sexual references and drug material.

Pauly Shore as Himself