The interminable slog of Netflix’s “How It Ends” had me thinking about endings in general. How it felt like the close of this film would never come. How we so commonly return in cinema, especially lately, to visions of the end of the world. How the actual ending of this film is an atrocious cheat. Trust me, you’re better off not even beginning.

The cheesy pitch for “How It Ends” could be “Meet the Parents” meets “The Rover.” It’s an apocalyptic road trip movie between a man (Theo James) and his future father-in-law (Forest Whitaker) from Chicago to Seattle as the world is ending. It opens with relatively stale domestic drama as James’ Will flies to the Windy City to meet with Whitaker’s Tom, the father of the woman that Will loves, Samantha (Kat Graham). Sam is pregnant, and Will wants to ask Tom for her hand in marriage to start a family. Will is a buttoned-up millennial who has moved Tom’s baby girl across the country and even once crashed his boat; Tom is a former Marine, who maintains a lot of that old-fashioned decorum (he yells at Will for swearing in front of his wife). Wouldn’t it be dramatic if these two were forced into an emergency?

Not really. And yet that’s what happens when Will is speaking with Sam on the phone and is abruptly cut off. All cell service to the West Coast goes down. And then things get even more ominous as the power goes out in Chicago and panic sets in. Knowing that transportation will go down shortly and that the roads are their best route west, Will and Tom jump in the car and head to Seattle to save Sam. They don’t know exactly what’s happened or if Sam is even in real danger, but these men are coming to save her!

What unfolds is a bleak, dull slog across the country that consists primarily of Will trusting people he shouldn’t trust. Brooks McLaren’s once-Blacklist script is a hodge podge of clichés about what would happen after the lights went out. Two days into this vision of national crisis and people are shooting each other for gasoline and basically taking the law into their own hands. It’s all stuff you’ve seen before, done better, and what’s most disappointing is how completely McLaren and director David M. Rosenthal completely waste even the minimal opportunity to say anything interesting about macho men trying to save their damsel in distress. There’s an interesting concept buried deep in “How It Ends” that would comment on two very different dudes from very different backgrounds bonding in their macho need to be White Knights. That movie never takes shape.

Of course, Will and Tom bond along the way, but it’s mostly because Will learns how to use a gun and talks about how much he loves Tom’s daughter. These are two of the least interesting characters to headline an end-of-the-world movie in years—there had to be more intriguing people to follow into the apocalypse. And James and Whitaker do the film no favors, sleepwalking through their roles. (Only Grace Dove, as a Native American who joins them for part of the journey, puts any effort into it. Her performance and a reasonably strong visual language from cinematographer from Peter Flinckenberg are the only things that get it even to its one-star rating.)

Netflix has escalated their war with the studios with each passing month, clearly trying to offer every genre and type of movie possible to compete. So, this means they have high-brow Oscar fare like “Mudbound” and low-brow mainstream fare like “Bright,” and everything in between. It also apparently means they have once-straight-to-video fare that used to get buried on the bottom shelf of a Blockbuster, rented 2-3 times by dissatisfied customers. 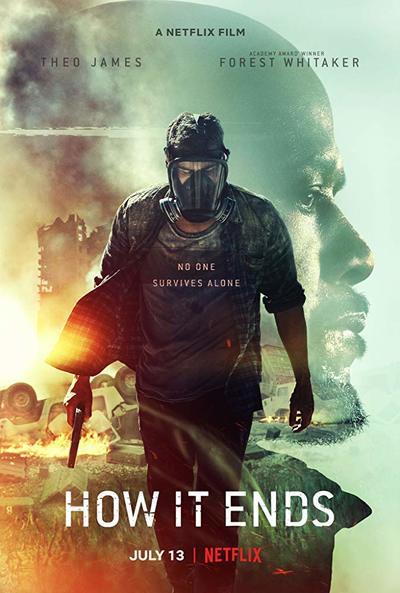 Theo James as Will