“Hotel Artemis” is based around a plot conceit so similar to one in the action hit “John Wick” that some may see this film as part of an extended John Wick Universe. Rest assured, to describe it merely as a knockoff of that movie is to do it a bit of a disservice because it borrows from a number of different sources, ranging from “The Purge” to large chunks of the filmographies of John Carpenter and Walter Hill to, oddly enough, “Grand Hotel.” While originality may not exactly be in great supply here, these familiar elements have been mixed with enough wit and style to make for some sleazy, insanely violent, and reasonably entertaining B-movie trash.

In “John Wick,” one of the cleverest plot devices was a hotel that catered exclusively to the discerning criminal element, all of whom agreed to follow the establishments strict policy against killing on the premises, even if your target was a fellow guest. In this film, the title establishment is an underground medical facility hidden away in a heavily fortified old hotel in downtown Los Angeles, whose patients are all criminals who pay a membership fee in order to get off-the-books medical treatment when a simple trip to the emergency room will not do. There are a long list of rules for members—no guns, no killing the other patients and such—that are all strictly enforced by the person in charge, a 70-something hard-drinking agoraphobe known only as The Nurse (Jodie Foster). If anyone even thinks of violating any of them, they have to deal with The Nurse’s sole assistant, Everest (Dave Bautista), whose nickname is perhaps the only example of understatement on display in this film.

Set over the course of one long night in 2028, the film starts off with tensions in the streets between police and protestors over a corporation’s recent decision to privatize the city’s water supply boiling over into a full-fledged riot. Inside Hotel Artemis, The Nurse and Everest are catering to a nearly full roster of guests, all of whom are known only by the names the “suites” where they recuperating. Waikiki (Sterling K. Brown) is a bank robber who turns up with his gravely wounded brother Honolulu (Brian Tyree Henry) following a job that has gone sideways following the latter’s latest screw-up. Acapulco (Charlie Day) is an arms dealer of such supreme obnoxiousness that most people will find him eminently deserving of his array of injuries. Nice (Sofia Boutella) is a French assassin whose injury turns out to be self-inflicted—she claims she just needs a rest but there is reason to suspect that she has other business in mind.

Between the guests and the riots wreaking havoc with the power, The Nurse is barely hanging on as it is but things are complicated further by two additional arrivals. The first is a gravely wounded cop (Jenny Slate) whose admittance would break one of the most sacred rules—no cops allowed—but who has a connection to The Nurse’s well-concealed past that is not so easily turned away. The other is The Wolf King (Jeff Goldblum), the city’s top crime boss who is the financial backer of Hotel Artemis who also has a past connection with The Nurse and who now shows up with a bad wound and an entourage led by his hot-headed youngest son (Zachary Quinto), whose desire to prove himself to the old man could prove to be the final straw.

Watching “Hotel Artemis” (presumably named because calling it Hotel Terminus no doubt seemed a little too on-the-nose), I found myself thinking of those weirdo Seventies-era exploitation movies like “Terminal Island” and “Death Race 2000,” which took outrageous premises and threw enough sex, violence, dark humor and bits of social commentary into the mix to elevate them above the usual grindhouse fare. Making his directorial debut, screenwriter Drew Pearce is clearly paying homage to that style of filmmaking and pulls it off with entertaining, if sometimes awkward results. The screenplay does a nice job of quickly and efficiently establishing the premise and the characters, especially regarding the unexpected connections that pop up between them, and demonstrates a nice sense of wit that helps keep it from being just another relentless gorefest. But there are large chunks that don’t quite work. The riot is introduced at the top and then pretty much abandoned for the most part except for when it can be used simply as a plot device. Similarly, the stuff with the Jenny Slate character is little more than a device to feed us background on The Nurse that might have been introduced in a more artful manner. However, Pearce keeps things hopping along quickly enough that one hardly registers these stumbles until long after the movie has ended.

The film is also helped in no small measure by the absurdly high level of casting on display. Considering that she doesn’t work a lot these days, I am not entirely certain what it was that inspired Jodie Foster to sign on to a project like this but it proved to be the correct instinct—once you get past the makeup used to make her look older and haggard, she invests her character with just the right amount of intensity and determination mixed with a nice streak of dark humor. The actors playing the guests are entertaining to watch as well—it could be argued that Boutella playing a sexy and exotic killer is not exactly a stretch for her but she is so much fun here. Best of all is Jeff Goldblum, who arrives fairly late in the proceedings but proves to be worth the wait as a crime kingpin who's dangerous and droll in equal measure—his delivery of his final line of dialogue is pretty much worth the price of admission by itself.

Look, there happen to be a number of very good movies in release right now, ranging from Paul Schrader’s intense drama “First Reformed” to the knockout scare show “Hereditary” to the delightfully slick goofiness that is “Ocean’s 8.” By comparison, “Hotel Artemis” is sillier and sicker than any of those films and I cannot say that I would recommend it over any of those aforementioned titles. However, I found myself unexpectedly engaged and entertained by it. This is a film that may not be for everyone—it is really violent throughout—but those who aren’t afraid of the grungier aspects of popular culture should have a blast watching it. 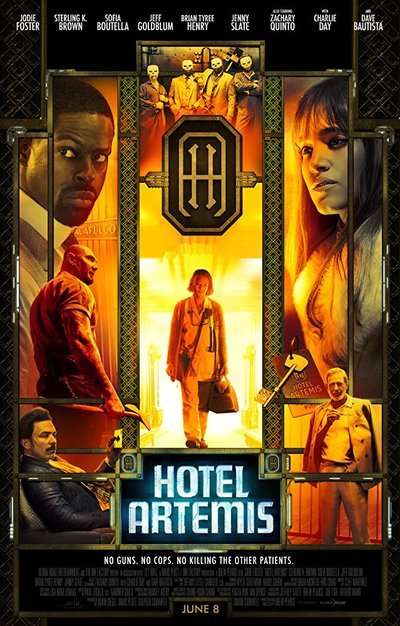