As a movie, “Hot Pursuit” can barely be said to exist. It is slackly constructed, unattractively shot, indifferently edited; its action scenes are very poorly staged; its storyline—a kind of hybrid of “The Gauntlet” and “Thelma and Louise” with scraps from several very lesser movies thrown in (“Due Date,” anyone?) is so rote that it even seems bored with itself. But as a delivery system for a newly minted and reasonably engaging if not always laugh-out-loud comedy team—Reese Witherspoon and Sophie Vergara—“Hot Pursuit” works, arguably, as well as it has to for much of its brisk hour-and-a-half.

In other words, if you key in to the often manic comic chemistry that Witherspoon and Vergara spark off, you won’t mind, for instance, the I’m-almost-certain-inadvertently-funny ineptitude of the take-down-the-bad-guy (is that a spoiler? Is that possible for a movie like this?) won’t bother you all that much. And you’ll also deserve congratulation, I suppose for being a very easygoing movie viewer. In any event: here Witherspoon plays Cooper (the fact that nobody ever refers to her by her first name is kind of a “character point”) a perky and ultra by-the-book goody-two-shoes cop who gets what she thinks is a dream assignment when she’s told to escort a witness in a drug-lord case to her Grand Jury appointment. That witness is Vergara’s Daniella, who’s very Vergara: brash, blinged-out, super confident and a potential fount of English-language malapropism, although the film doesn’t, for better or worse, exploit that last bit of comic potential much.

Rather, after a scene in which both another witness and a bonafide Federal Marshall are killed—you’ll notice that by opening with a double murder, you get the comic tone set and fixed right there—Witherspoon and Vergara’s characters spend a lot of energy and time insulting each others personal appearances, pausing only to outwit the bad guys who wanna kill them via an outpouring of guilt power. The funniest bit is the most biologically graphic, in which the duo convince their potential assassins to grant them a bathroom break by describing human female menstruation in detail to the grossed-out Evil Bros. Powerful Sisterhood, however, consistently eludes Cooper and Daniella, as the script’s too-busy and eventually utterly beside-the-point plot twists compel Vergara’s redeemable Bad Girl to keep stabbing Cooper in the back. Okay, maybe that’s too strong. More like she kicks her in the shins and runs. Literally. And over and over again.

The energy, commitment, and good will displayed by the lead performers is pretty much the movie’s only redeeming quality. I’ve seen one critic compare their interaction to that of Bob Hope and Bing Crosby, old-school comic performers who starred in a series of “Road” movies back in the day. Those films were not terribly substantial, but at least their makers had some sense of story carpentry, even when the story served no purpose except to let the top dogs riff. They would not, for instance, kick off the action of their scenarios with a scene of a cop getting murdered. They’d find another way to get their characters into a fix. I’m not saying this because I found the set up of “Hot Pursuit” to be actually offensive. Just lazy. Really, really lazy. 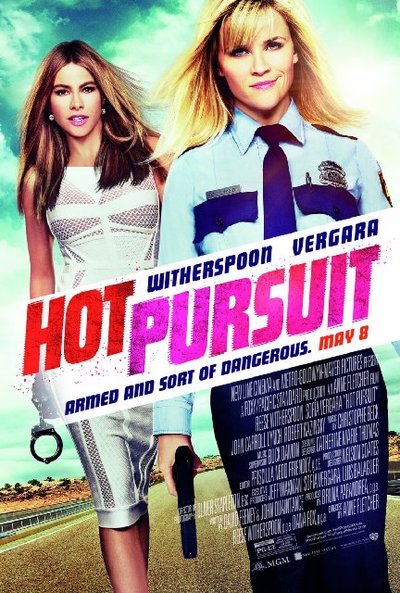