About four years ago, I attended an exhibition at the Hirshhorn Museum in Washington D.C. It featured the work of Ai Weiwei, the controversial Chinese artist and activist whose courageous muckraking was memorably chronicled in Alison Klayman’s great 2012 documentary, “Ai Weiwei: Never Sorry.” One of the artworks on display was so wrenching that I still choke up when recalling it. The names of schoolchildren killed in the 2008 Sichuan earthquake were sprawled along a wall as the recorded voices of Chinese citizens recited them. Since the government refused to investigate the schools’ faulty construction or even bother to release the names of the victims, Ai Weiwei collected them one by one. At the time, I wrote that there was perhaps “no greater champion of individuality and its inherent power,” though now that I’ve seen Nanfu Wang’s “Hooligan Sparrow,” I am convinced that I have found his equal.

Her name is Ye Haiyan (a.k.a. Hooligan Sparrow), a women’s rights activist who has fearlessly exposed the tyranny of China’s government, which appears to be comprised largely of bullying chauvinists. In order to raise awareness for HIV prevention, Ye lived the illegal life of a sex worker, distributing free condoms while claiming that they were government subsidies. Of course, the government does not approve, and does everything in its power to obstruct her efforts to shed light on what is, without question, an act of irredeemable evil. In the Hainan province, six schoolgirls aged between 11 and 14 are raped at a hotel by their principal, Chen Zaipeng. When the news breaks, the principal argues that he paid the girls for sex and that they should be prosecuted for child prostitution. This monstrous crime is merely the latest instance of young girls being offered up as bribes and human sex toys for Chinese officials. When the victims’ parents respond in outrage, sharing pictures of their daughters’ bloodied underwear, they are browbeaten into silence.

Sexual abuse perpetuating the transference of blame onto the victims can be found in every country, including our own (look no further than Bonni Cohen and Jon Shenk’s equally blistering “Audrie & Daisy” for sufficient proof). When Ye and her devoted group of fellow activists refuse to let their cries for justice be stifled, their words resonate on a global level. After picketing outside of the girls’ school, calling for the principal’s arrest, Ye goes online and shares a picture of herself holding a sign that reads, “Hey, principal, get a room with me—leave the children alone!” It’s not long before men break into Ye’s home, beat her and then charge her with assault. The Internet’s response to Ye's subsequent arrest leads her to be released after 13 days, though it’s clear that she remains imprisoned in a nation ruled by forces that want her to vanish as soon as possible. Celebrated human rights lawyer Wang Yu, who also participated in Ye’s protests, points out that the activists (herself included) could disappear at any time, which is especially chilling, considering that she is currently serving a life sentence without trial.

All of this is observed through the lens of Nanfu Wang, a Chinese American filmmaker helming her feature debut. It’s miraculous that the film exists at all, since the footage was constantly in danger of being detained during production, requiring it to eventually be smuggled out of the country. Clocking in at a brisk 84 minutes, the film plays like a gripping thriller, fueled by an ever-present threat. Wang never resorts to cheap gimmickry in order to heighten the tension. She knows the footage is strong enough to stand on its own, and what’s amazing is how many stylistic staples of the thriller genre naturally find their way into the picture. For example, there’s a sequence where Wang is forced to charge up a stairwell while pursued by police. By keeping her camera switched on, she enables us to hear the sound of her labored breathing as well as the screams of captured activists echoing from the ground below. The scene is identical to any chase in a found footage horror flick, yet by this point, Wang has us so wrapped up in her plight that we find ourselves holding our breath until she reaches safety. Another of the director’s masterstrokes is her decision to juxtapose the audio of Ye being beaten (heard via a phone recording) with the image of water racing past the camera. Subtitles are placed in the center of the frame, with the words of her attackers colored in bright yellow. It’s a simple technique that turns out to be agonizingly powerful.

If there is a limitation to the film, it’s the fact that Ye Haiyan isn’t truly its central focus. Though Wang makes the most of their encounters, there are large sections of the film in which Ye is elsewhere, causing the filmmaker to place herself in the foreground. Yet Wang’s achievement is heroic in its own right, as she finds ingenious ways to document the pervasive corruption of Chinese officials, even utilizing a camera embedded in a pair of glasses. What this film is really about, in essence, is the spirit of defiance that unites us in opposition to what has become an increasingly tyrannical world. “When people judge women’s choices, they forget their sacrifices,” says Ye toward the film’s end, as she reflects on the countless women who have given up their education or are forced into an unwanted marriage. Ye’s own sacrifices are all the more staggering in light of the fact that she also happens to be a mother. Faced with eviction, her daughter, Yaxin, insists that she’s fine with sleeping on the streets “as long as it’s safe.” Perhaps the film’s most singularly haunting image is that of Ye and her daughter abandoned on the side of the road, surrounded by their belongings stacked in boxes. In the last moments of the film, we learn that these boxes have been transferred in their entirety to an Ai Weiwei exhibition in New York City, where they are put on prominent display. A friend of mine once said that “a person’s very existence can serve as a protest.” Regardless of their ultimate fate, the existence of Ye Haiyan and every soul she has ever sought to protect are undeniable, and thanks to filmmakers like Wang, immortal. 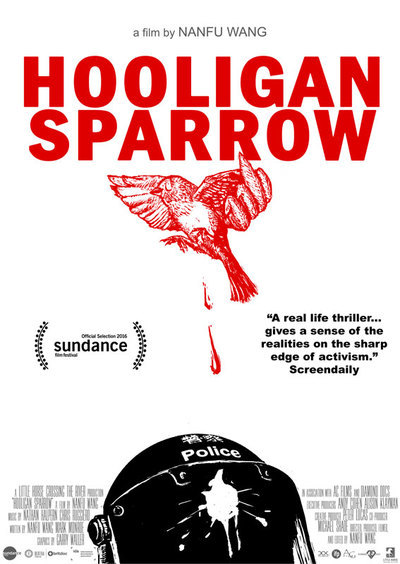