The story of men leaving for and tragically falling casualty to wars, and the women who are left behind heroically picking up the burden in their absence, is as old as time. It’s also the straightforward tale at the core of writer/director Blerta Basholli’s sturdy domestic drama “Hive,” a triple-Sundance-winning film that honors feminine strength and applauds its resilient bite against the harsh patriarchal backdrop of Eastern Europe.

At the center of it is the true story of Fahrije Hoti (Yllka Gashi, delivering a performance of fuming power), a Kosovan woman struggling to make ends meet while caring for her two kids—a young son and a sometimes maddeningly unsympathetic teenage daughter—as well as her father-in-law Haxi (Çun Lajçi). She’s been stuck in this situation a for quite some time now—the chronology isn’t identified exactly, but one can assume well into the aughts or possibly later, after the war in Kosovo ended in 1999 and left her husband missing in its wake.

Fahrije knows she won’t be able endure the hardship much longer. The beehives that her husband had set up are inadequate in providing for her modest household. Not to mention the frequent painful bites she has to suffer on the job, the sting of which Basholli’s camera intensely captures. So she spearheads a different kind of hive in its stead, starting off a business of homemade hot pepper preserve that involves other hardworking women in her situation and a savvy deal made with a local market that agrees to buy their product.

Worded like this, her venture sounds a lot easier and uneventful to kickstart than what we actually witness in the film, happenings that involve a network of unforgivingly patriarchal players shaming Fahrije for daring to get ahead in life and a group of intimidated women initially refusing her financial proposal just to avoid gossip. The women’s hesitation frankly seems understandable when Basholli gives us a damning taste of the impediments the deeply misogynistic town collectively throws Fahrije’s way, calling her a whore for everything, from obtaining a driver’s license to facing male buyers on her own.

The hostility escalates to such an unbearable extent that during one drive, someone vandalizes her car. During another, she gets subjected to sexual assault by the very man she’s supposed to do business with. On an especially soul-crushing day, she and her fellow workers find their jars smashed, their paste spilled all over. Basholli follows and photographs these events with an unfussy style, keeping her focus on the town’s suffocating earthiness and Gashi’s gradually hardening exterior that stubbornly fends off the vulgarity that surrounds her. At times, the filmmaker also finds traces of Fahrije’s unconsummated grief through her empathetic lens, discharging the pent-up sorrow at an especially heartbreaking scene where the young woman is asked to identify a lifeless body that could belong to her missing husband.

Knowing that the real Fahrije now has a thriving business of pickles and preserves, where the tale goes from there on out isn’t hard to predict. But the confident humanity through which Basholli gets there is still worthwhile to witness. In its most uplifting moments, “Hive” celebrates the enabling properties of indestructible female camaraderie, something that Fahrije experiences once a crowded pack of the women in her circle overcome their fear and join her, especially after an older one of the bunch—the no-nonsense Naze, terrifically played by a deadpan Kumrije Hoxha—steps up and leads the way. There is release and relief in seeing their success, witnessing Haxi’s change of heart, and watching the clan of triumphant women celebrate their achievements in an exuberant, traditional circle dance.

Though it doesn’t break new ground, “Hive” still reminds one how urgently significant it is to honor the unique fighting spirit of women, and how much cinematic joy seeing that spirit flourish against the odds can bring about. 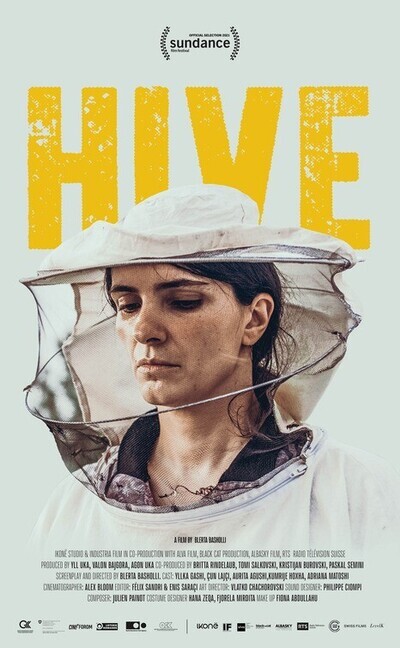