"You gotta get that `We are the world' crap outta your head.

'Cause it ain't gonna happen on this campus." Dialogue in "Higher Learning" T he college campus in John Singleton's new film is a racial and ideological war zone, where students rarely talk to other students who are not more or less just like themselves. Early in the film, a black freshman is given a tour of the turfs staked out by various racial groups: "There's Chinatown...the Black Hole...

Disneyland...South of the Border..." The enforced segregation of the past has been replaced by a new, voluntary xenophobia, and the result is a dreary place in which people define themselves by negatives.

The institution is named Columbus University (named after the Dead White European Male whose "discovery" of America led to genocide, etc., etc.). It is not safe to walk the campus grounds after dark. The Students for a Non-Sexist Society promotes mottos like "Dead Men Don't Rape." And this is not some futurist Orwellian nightmare, but a more or less realistic picture of the Politically Correct modern campus. It is easy to imagine that in a faculty office, David Mamet's "Oleanna" is taking place.

Into this sanctuary of self-enforced apartheid comes a new freshman class. It includes a young black man named Malik (Omar Epps,) a young white woman named Kristen (Kristy Swanson), and a young white man named Remy (Michael Rapaport). They are here, allegedly, to learn, but most of their most important lessons will be taught by the campus itself. The only classroom we enter is ruled by the most conservative character in view: Professor Phipps (Laurence Fishburne), the pipe-smoking West Indian who refuses to play favorites and has the quaint idea that all students should be judged only on the basis of their performance.

Singleton's film is interesting for a lot of reasons, but especially because he stands outside this campus system and looks at it with a detached eye. Like Spike Lee's "School Daze," Singleton's "Higher Learning" is idealistic in a way that seems refreshingly dated: He believes the campus should allow students from different races and places to get to know one another, instead of compartmenting them into rigid self-righteousness. At a time when some believe only blacks should teach black studies and the ideas of dead white European males should hardly be taught at all, this is almost radical.

Singleton himself, at 26, is only a few years out of USC, and his film is at home on the campus. Looking through the eyes of the incoming freshmen, we go through the process of moving in, meeting roommates, taking the first classes, and socializing. For Kristen, the first week is a nightmare. She meets a cute guy at abeer blast, goes home with him, and is a victim of date rape.

Singleton's handling of this scene is perceptive; he shows the outcome predicted even in its earliest stages ("You think we should let Kristen go with Billy? 'Cause she doesn't even drink"). It shows Billy's own confusion, and the way booze contributes to it. And it sets up a subplot, as the shattered Kristen is befriended by Taryn (Jennifer Connelly), head of a feminist group and a lesbian who Kristen will eventually consider as a possible lover.

Taryn doesn't "recruit" Kristen exactly, although she has her eye on her. The first night that Kristen seems attracted, Taryn even warns her: "Don't say yes simply because you're fascinated." Singleton is making a larger point, about how young freshmen seek role models on a campus, and are singled out by older students who take advantage of their naiveté.

Malik, the black student, is soon in conversation with Fudge (Ice Cube), a "professional student" who has been on campus six years and affects an Afrocentric position. And Remy, the scared young white kid with the confused eyes, is singled out by a clever, demented neo-Nazi skinhead (Cole Hauser) who correctly guesses he might be capable of violence.

Each of these older students is supporting a position. Fudge sees himself at war with white America, and quizzes Malik on whether he would stand during the National Anthem "in a football stadium, with 60,000 eyes on you." Taryn believes men can basically not be trusted. The skinhead envisions race war as a worthy goal, believes the campus is a good place to start, and suspects his freshman recruit might be crazy enough to pull a trigger.

Standing apart from all of these factions, in a performance all the more effective because it is so subtle, is Laurence Fishburne as Professor Phipps. He persists in seeing each student as an individual, apart from his or her group. He has only one standard for grading. Malik, recruited to the campus as a potential track star, feels himself out of depth in Phipps' class and tries to play the black card, but Phipps isn't playing: He would not be doing Malik a favor, he explains, by holding him to a lower standard. So Malik works harder, tutored by his new girlfriend Deja (Tyra Banks), and is eventually able to turn in a decent paper.

Meanwhile, a sense of impending doom hangs over the campus.

All of these groups with all of their agendas are headed for a collision. Singleton does a good job of cutting back and forth between many stories; this is not a "black movie" but sees the whole campus population as its subject.

He handles the subplot involving the neo-Nazis especially effectively; skinheads lend themselves to parody, but in Cole Hauser and Michael Rapaport, Singleton has cast two effective actors who bring a chilling plausibility to their roles. Rapaport plays a big, confused kid who looks like a rabbit caught in headlights, and Hauser, with his cynical charm and insinuating drawl, is like a snake-charmer.

"Higher Learning" is Singleton's third film, after the great "Boyz N the Hood" (1991) and the more meandering, romantic "Poetic Justice" (1993). He may be following, in some way, the threads of his own autobiography, in these three films about teenagers in South Central Los Angeles, young people working for the post office, and now freshmen in college. He sees with a clear eye and a strong will, and is not persuaded by fashionable ideologies. His movies are thought-provoking because he uses familiar kinds of characters and then asks hard questions about them.

"Higher Learning" has no easy answers. In an opening scene, when the black freshman gets on an elevator with the young white student, she instinctively clutches her purse tighter. In a closing scene, we see them able to talk with each other in the aftermath of a campus tragedy. She doesn't remember the moment in the elevator. He does. But life goes on, and why does a campus exist, except for learning? 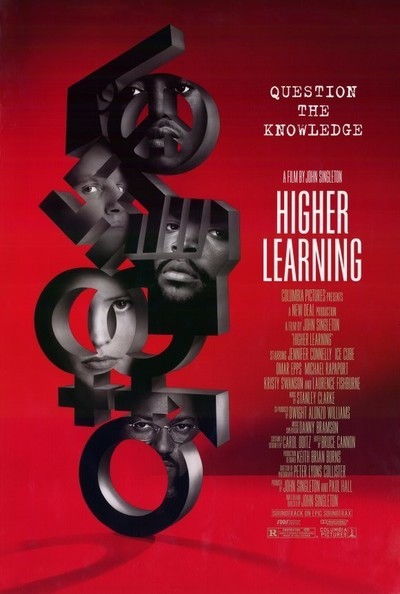 Rated R For Scenes Of Violence and Sexuality, and For Strong Language