Well, I'm relieved. The announcement of a gender-switched version of 1999's "She's All That" from its original screenwriter (R. Lee Fleming Jr.) had me worried it would just replicate the worst elements of the original story of a popular high school boy making a bet that he can turn a dorky art student into a teenage dream girl. I'm still trying to forget the pizza scene and I know texting was not a thing back then, but the racing around at the big dance climax was annoyingly contrived. I also feared the remake might get all cutesy and meta, overdoing the references to the original in hopes we would not notice the lack of originality. Also, there was already was a gender-switched version back in 1999 called "Drive Me Crazy." It was hard to imagine there was anything more to add to a story that was itself a re-tread of "My Fair Lady," which was a re-tread of "Pygmalion." That's a lot of re-treading.

I'm happy to report that "He's All That" avoids these pitfalls. It is a sweet little end of summer sorbet with appealing young performers and a script that refreshes the original without overdoing it. There are a few nods to "She's All That," starting with Rachel Leigh Cook, the "She" of the 1999 film, as the mother of the main character, a popular high school senior and social media influencer named Padgett Sawyer (Addison Rae). Matthew Lillard, from the cast of the original, shows up, too. And the film's best-remembered song, "Kiss Me" by Sixpence None the Richer, comes at just the right moment. Updates like a more inclusive storyline and the stress of social media are understated but meaningful.

The first thing we see is Padgett's pink and pretty bedroom, set up to display the pink and pretty persona she has created for social media. Padgett has almost 900,000 followers who love every detail of her life, especially her gift for makeovers and her romance with Jordan Van Draanen (Peyton Meyer), a classmate who is an up and coming musical performer. Her posts have earned her a cosmetics company sponsor so generous she is able to save for college and help her single mother, a nurse, with the household bills.

Her discovery that Jordan has been unfaithful is broadcast live, like just about every other moment of her life, and her meltdown is the kind of messy reality influencers are not allowed to have. She loses followers, and then her sponsor (Kourtney Kardashian, who is way out of her depth when it comes to saying words).

Padgett is desperate to erase the images of herself being authentic and reclaim her popularity. Her friend Alden (Madison Pettis, a long way from playing Dwayne Johnson's daughter in "The Game Plan") proposes a bet with some extreme stakes and Padgett rashly agrees. She says she can take the school dork and get him elected Prom King. That would be Cameron (Tanner Buchanan), scruffy and cynical.

We know where this is going. Every bit of it is inevitable, from the way Padgett gradually wins him over to the trying-on-clothes montage to how he challenges and surprises her along the way. One element Fleming retains from the original is the wise younger sister, played by Anna Paquin in the first version and here played by Isabella Crovetti. As she showed in the neglected gem "Magic Camp," also directed by Mark Waters, Crovetti has a wonderfully wry, slightly offbeat line reading that hints at something just a little bit dark.

Cameron nicely counterposes Padgett, whose entire life is about aspirational images of herself seen by as many people as possible, with Cameron (hmmm, as in "camera on"), a serious street photographer who is not willing to share his images with anyone or to be in the images himself. Each gingerly edges into a willingness to be seen, Padgett in part through another painful public betrayal, Cameron in spite of one.

Plus there's a dance-off! A really fun one! Waters, who showed a gift for directing teenagers in "Mean Girls" and "Freaky Friday," makes sure that Rae and Buchanan have a chance to give their characters more layers, including some self-awareness, than we usually find in teen romantic comedies, with a lot of help from the two exceptionally appealing performers. Anyone other than those who saw "She's All That" at such an impressionable age and developed an emotional attachment will probably consider this an improvement. And those who do not will have the comfort of knowing that the next time this story is remade, today's teens will be just as disconcerted when their children prefer version #3. 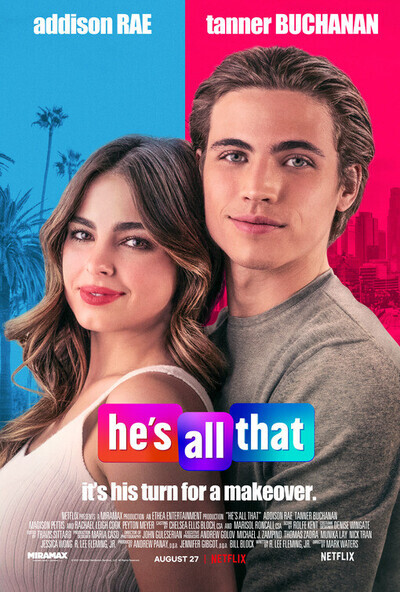