"Here Comes the Devil" is a horror movie. The problem is that writer-director Adrián García Bogliano can't decide what kind of horror movie he wants it to be.

Is it a slasher flick? A creepy sexual morality tale? A revenge thriller? A 1970s throwback about Satanic possession and the breakdown of the family dynamic? Sure, let's just chuck all of that in there, add some blood spurtings and bare breasts, then see what sticks.

Actually, intermingling all those subcategories of the horror genre could have made for a rich and fascinating update on the spirits-invade-the-kids story that's been done so many times before, in films ranging from "The Exorcist" to "Insidious." Unfortunately, the direction of Bogliano, the Argentina-raised filmmaker behind previous shockers "Cold Sweat" and "Penumbra," lacks the sophistication needed to braid all of those threads. Instead, "Here Comes the Devil" is a 98-minute mess with misogynistic undertones, a film that so blatantly tries to titillate and shock its audience that it winds up doing neither.

The film opens with a fuzzy shot of two women in the throes of love-making, which eventually segues into a conversation in which one of them, apparently new to lesbian relationships, expresses confusion about the affair. The post-sex chat is interrupted, as so many post-sex chats are, by a man knocking on the door and wielding a machete. He's eventually driven away by a blow to the head delivered by the victim's lover, but only after he's hacked away at said victim's hand. "His eyes…" says the now finger-deprived woman just before she loses consciousness. "Did you see his eyes?"

The narrative then cuts to a family enjoying a picnic in Baja, Calif., an excursion cut short when the pre-teen daughter, Sara (Michele Garcia), gets her period. Her mother, Sol (Laura Caro), helps her daughter clean-up in a local gas station restroom where she notices a creepy lurker peering through the door and leering at the blood-stained underwear sitting on the vanity. For reasons that defy explanation after such an experience, Sol and her husband Félix (Francisco Barreiro) allow Sara and her brother Adolfo (Alan Martinez) to take a quick hike in some nearby hills while they stay behind and engage in some heavy petting in the gas station parking lot. Naturally, the kids don't come back as planned. When they eventually return, they seem altered in ways that quickly drive Mom and Dad to take fevered action.

With its conspicuous zooming close-ups and use of drum-heavy music to generate suspense, Bogliano is clearly aiming to pay homage to psychological horror films of the 1970s. (In the press notes issued by studio Magnet Releasing, he specifically mentions "Don't Look Now" as an inspiration.) But Bogliano's film is filled with so many clunky edits and failed attempts at bone-chilling moments—a levitation sequence is laughably unbelievable—that the movie winds up feeling like the cinematic equivalent of a kid dressed up in thrift store clothes: it wants to be vintage, but it just looks kind of goofy.

"Here Comes the Devil" also raises some provocative but problematic gender issues that it fails to properly address. It's impossible not to notice that when "the devil" first winds its way into the story, it does so just after moments of sexual discovery for women: just after that lesbian encounter in the beginning, and again after Sara gets her first period and Sol experiences a front-seat-of-the-car climax in the gas station parking lot, a plateau achieved while she and her husband are engaging in dirty talk about her first sexual encounter. Does this mean that Satan—or whatever intangibly evil entity plagues the characters in this film—wants to punish women for experiencing pleasure, or reaching the prepubescent potential for such pleasure? Is Bogliano a sexist, or is he making a more subversive point about our collective discomfort with the transformation young girls undergo from objects of innocence into objects of desire?

"Here Comes the Devil" never clarifies. By the time the ending comes—an ending that hints at the possibility for a "Sixth Sense"-style plot twist that, sadly, never arrives—the only conclusion one can reach is that this movie isn't saying anything significant about anything. It's just a bunch of stuff about demons, murder, female nudity and violent stabbings that, thankfully, will be exorcised from the memory almost as soon as the end credits finish rolling. 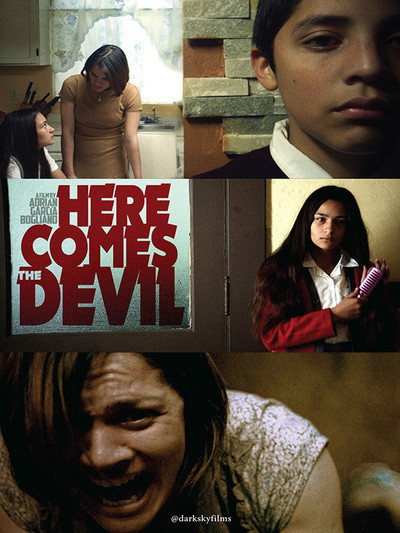