Out in front of the Roosevelt Theater there's a big photo of John Wayne and this quote, attributed to him: "I've made a lot of action pictures but never one as exciting as this." I doubt that Wayne volunteered this information; it sounds more like a studio publicity idea.

The fact is, Wayne has made a lot of action pictures, and over the years he has gotten to be about as good at it as anybody. He must have been miserable during the filming of "Hellfighters," which is a slow moving, talkative, badly plotted bore.

The basic premise was promising: Wayne, who has played about every other sort of man of action, would be an oil-well fighter this time. That could have been fascinating if the film had really gotten into the techniques of his occupation.

Instead, there's a ridiculous story involving Wayne's wife (Vera Miles), who left him because she couldn't stand the worry, and his daughter (Katharine Ross), who marries his partner and insists on coming along to all the fires. Most of the action consists of everybody standing around telling the women they don't belong in a place like this. My theory is you should either leave women out of action pictures or give them something to do.

The film is a disaster for Miss Ross. In "The Graduate" she was beautiful, subtle and a great actress. Universal, which has her under contract, should have looked around for another suitable role. Instead, they dumped her into a routine potboiler, gave her the sort of dialog "The Graduate" satirized, married her to a dull, transparent Clod (Jim Hutton) and cut off her hair. 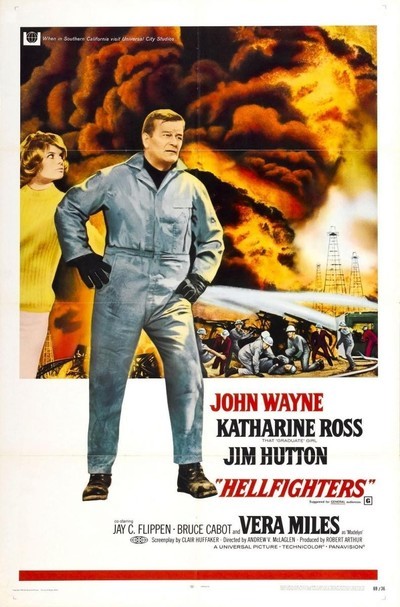